Timeless, classic compression modeled after what is probably the most used, most known and most universally recognized compressor/limiter in the audio industry
MFR# 1049-55
Shop All IK Multimedia
Skip to the end of the images gallery 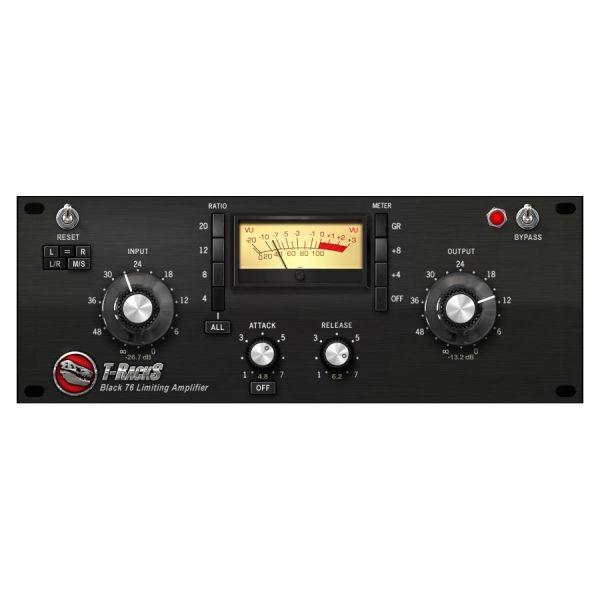 The IK Multimedia Black 76 Limiting Amplifier is modeled after what is probably the most used, most known and most universally recognized compressor/limiter in the audio industry. There are probably no professionally recorded tracks where this unit wasn't used. It's a true legend and a piece of music production history.

The engineers that made this FET based compressor reached a level of cleverness and magic that only true visionary geniuses can achieve. While there are many revisions of this hardware, we modeled the LN version, revision E, because it's the one that has the most sonically recognized and sought after character thanks to its input transformer and class A output stage.

All of its features have been closely modeled, from its lightning fast attack, a peculiarity of this model, to the "all buttons in" mode: this is a trick that engineer use to create some pretty intense and wild effects, since when all ratio buttons are pressed together distortion drastically increases due to continuous and radical time constants shifts; this is a good way to hit room tracks hard or smack parallel busses for distinctive sonic signatures.

It's also a “go to” unit for standard compression duties, thanks to the quality of the sound it imparts to a track, even when not compressing, and to the simplicity of its controls: just set the input and output level to get in the ballpark of how much gain reduction is needed, then once set the Ratio the compression is quickly fine tuned with the time constants controls.

It is difficult to find a track or source where this compressor won't sound good; it is practically able to give authority and personality even to the most sterile track; bass is one of the most common uses for this plug-in but its very fast attack makes it very handy on percussive sources, like snare drum; vocals will benefit from its solid compression, standing out in the mix with presence and boldness. It's not out of the ordinary to see a pair of these compressors stereo-linked across the main bus of a mixer, so the fact that the T-RackS model is either mono or stereo makes it easy to replicate this technique.

Please fill out the form below and a Vintage King Audio Consultant will contact you with a ship date for the IK Multimedia T-RackS Black 76 - Electronic Delivery.

Have a better price in mind for the IK Multimedia T-RackS Black 76 - Electronic Delivery that you've been checking out? We're willing to work on it!Please fill out the form below with your contact information.Once the form is submitted, a Vintage King Audio Consultant will contact you as soon as possible with our best price on this product.