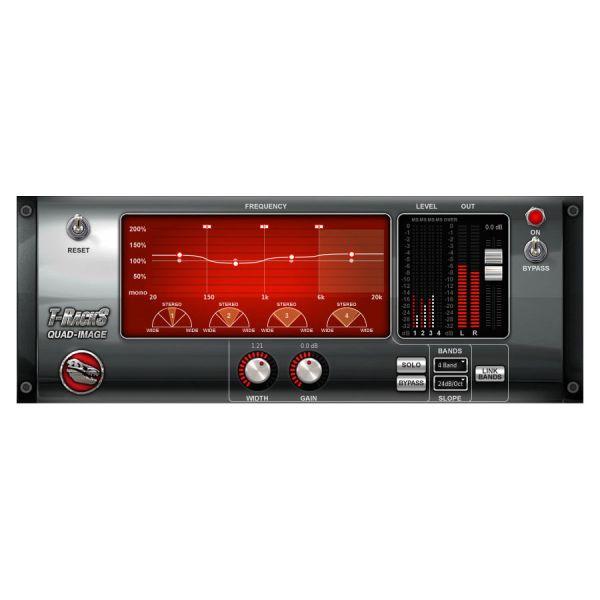 Combining the concept of M/S (Mid Side) matrix processing of the stereo field with multiband architecture, the IK Multimedia Quad Image effectively allows control over the stereo width of each frequency band. Its simple control set notwithstanding the Quad Image is a powerful processor.

The M/S processing in each band allows complete control on the stereo image over selected frequencies. This can be either used to fix technical issues in mixes, where the relationship between center (M) and side (S) content may be wrong or may need tweaking in selected regions of the audio spectrum, or to perform creative effects like exaggerating the width of a stereo source, like a synth track, to generate cool and unusual stereo "tricks".

As in the rest of the T-RackS Quad-Series processors, IK has made sure the quality of the filters used to perform the band slitting was of the highest quality; in this context it was even more crucial as the M/S nature of the module has a close relationship with phase manipulation.

Being able to control the stereo width of a selected frequency band is a tremendous power: widening the high end while maintaining the bass content focused in the center, or doing the opposite, according to your needs.

As said above, this processor is usually used on the stereo master bus, when there is the need to correct the less than perfect balance of the M/S components of a mix. This doesn't limit the use of the powerful processor, which will come very in handy to say, control the frequency spread of drums overheads, where there could be the need to restore the focus of the center kick and snare drums which could have been miked poorly or too-wide during recording.

Please fill out the form below and a Vintage King Audio Consultant will contact you with a ship date for the IK Multimedia T-RackS Quad Image - Electronic Delivery.

Have a better price in mind for the IK Multimedia T-RackS Quad Image - Electronic Delivery that you've been checking out? We're willing to work on it!Please fill out the form below with your contact information.Once the form is submitted, a Vintage King Audio Consultant will contact you as soon as possible with our best price on this product.