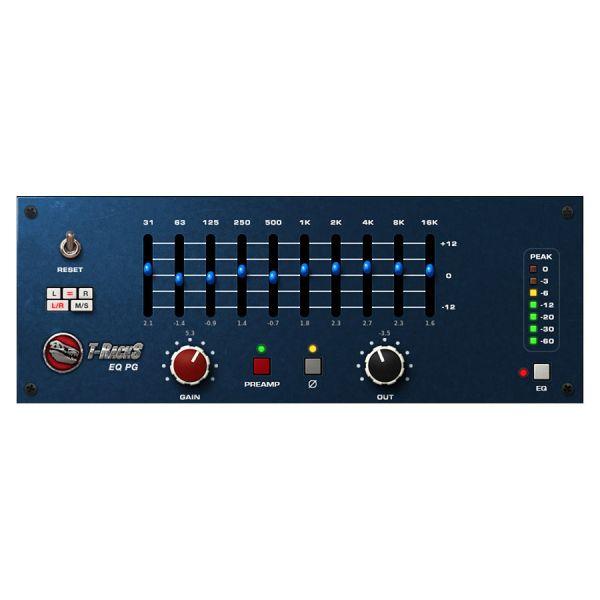 This results in several differences, but still a killer sound.

The core circuitry that this module was based on is still the custom op amp like its parametric brothers. So the same sonic character is retained here, but the graphic approach makes it quick and easy to dial in a particular shape, which is clearly shown by the ten vertical sliders.

This module is handy when you need to make EQ adjustments on larger parts of the spectrum instead of a restricted area. Boosting or cutting several bands at once will radically alter the sound of a track, be it a thin, weak snare that needs low end or a dull vocal that needs to be opened up.

This module is a great complement to the EQ PA and EQ PB parametric modules.

Modeling with extreme accuracy all of the signal path and the high headroom allowed by the custom op-amp and the output transformer of the original hardware made possible to maintain all of the analog character and subtle harmonic distortion that makes this modules so "beefy". Such feature is the key to its big and bold "American sound" that is clearly recognizable in hundreds of A-list mix productions.

On top of this, the reciprocal nature of the EQ PG’s bands, and its fixed frequencies, easily allows it to "undo" a boost or cut operation on an already processed file.

In addition, the EQ PG is loaded with the same preamp circuit as the two other EQ models — this enhances and expands the sonic possibilities of the module. The low noise design of the original circuit allows the signal level to be adjusted with the added warmth and low frequency harmonic content of an additional transformer. Reaching the higher end of the range, a hard clipped character is imparted to the sound: this particular harmonic distortion combined with the massive tone shaping capabilities of the filter bank makes tracks stand out in many occasions. Saturation on a bass track makes its “nose” poke out in a mid-heavy mix, clean vocals grungy and lo-fi, and a drum kit downright scary. The possibilities are almost endless.

Please fill out the form below and a Vintage King Audio Consultant will contact you with a ship date for the IK Multimedia T-RackS EQ PG - Electronic Delivery.

Have a better price in mind for the IK Multimedia T-RackS EQ PG - Electronic Delivery that you've been checking out? We're willing to work on it!Please fill out the form below with your contact information.Once the form is submitted, a Vintage King Audio Consultant will contact you as soon as possible with our best price on this product.