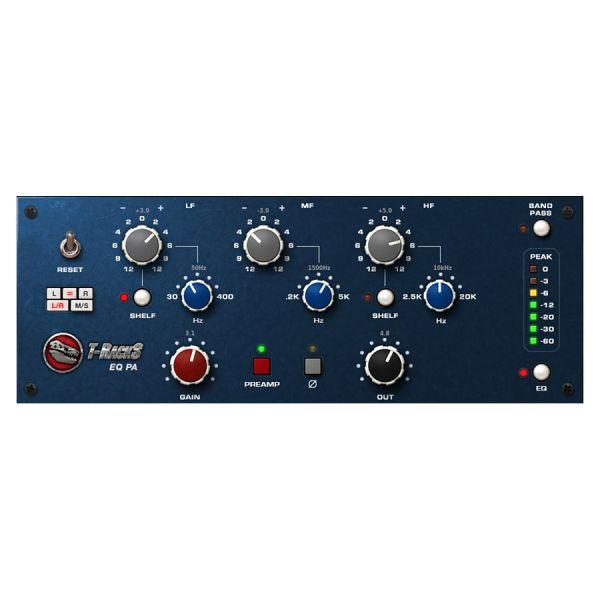 Classic American EQ is what the IK Multimedia T-RackS EQ PA module screams about. Its three band proportional Q design — the result of an ingenious mind and clever engineering — made it progress very fast to the position of a "go to" equalizer on many custom designed modular consoles of the late '60s and '70s. It then gave birth to a portable, modular design concept

IK Multimedia meticulously modeled all of the custom op amp based circuitry to unveil the sonic goodness and detail that made this module ubiquitous on any major record production for tracking and mixing duties.

Three bands of sonic excellence for a total of twenty-one frequencies make repeatability very easy, and their careful selection allows extremely musical results. The EQ PA features several "IK-Style" digital-domain improvements to an already time-honored sonic print where frequency and gain knobs have been separated for improved usability and fast sight. The advantage of the T-RackS format makes for a clear and less cluttered interface that’s far superior in ease of use.

Each band's gain has 1 dB resolution making it easy to find those "in between" boosts or cuts where 2 dBs could be too few and 4 dBs too much. The resolution becomes 1.5dBs in the higher part of the knob's throw.

Switching the outer bands from peaking to shelving mode is the key to achieve super fat low end on kick drums and bring out the "punch" when boosting in the 40 to 50 Hz zone; going as high as 10 to 15KHz will lift the airy top end on acoustic guitars or vocals while still retaining all of the analog character this EQ is world renowned for.

Particular care was taken to make sure the proportional Q design and EQ curves were closely matched so that the boost or cut is broader at lower amounts of gain and gets sharper as the level is increased — an additional switchable "band pass" filter, achieved with the combination of high and low pass filters, rounds out the pack.

As already done in previous models from the T-RackS CS line, IK Multimedia went the extra mile to make the EQ PA unique: on top of the three band EQ, the module features a preamp stage, which will further expand the tonal variations.

From clean gain adjustments to hard-clipped distortion, its input and output knobs can be set to either add subtle character or wild sonic textures and unlock creativity during recording or mixing sessions. This thing puts the T-RackS EQ PA ahead of the curve.

Please fill out the form below and a Vintage King Audio Consultant will contact you with a ship date for the IK Multimedia T-RackS EQ PA - Electronic Delivery.

Have a better price in mind for the IK Multimedia T-RackS EQ PA - Electronic Delivery that you've been checking out? We're willing to work on it!Please fill out the form below with your contact information.Once the form is submitted, a Vintage King Audio Consultant will contact you as soon as possible with our best price on this product.