$ 49 .99
No interest if paid in full within 18 months Learn more
In Stock - Fastest eDelivery 24/7!
This product is delivered by download. Once your order is complete, you will receive a license code via email within minutes. Note: Software is not returnable, so please call if you need advice about compatibility or version. 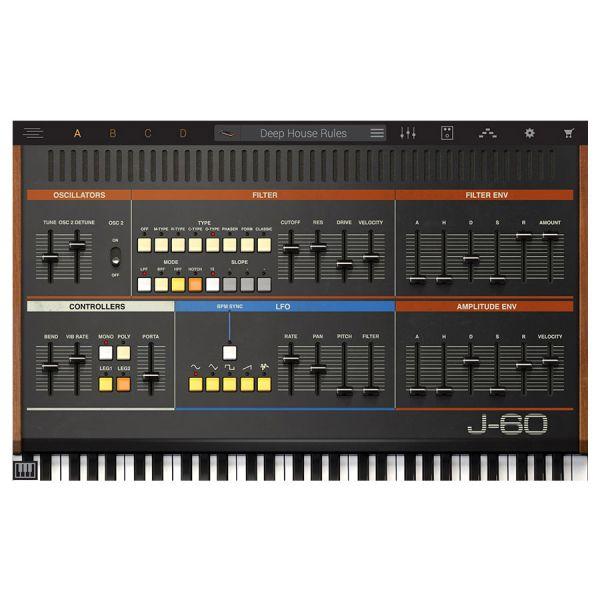 The IK Multimedia Syntronik J-60 Synth brings users the authentic sound of the Roland Juno-60. Manufactured from 1982—1984, the Juno-60 was the lower-priced alternative to the very expensive Jupiter-8, but it found a place in music production all its own.

The Juno-60 also only has one oscillator per voice vs. the Jupiter’s two. Because of this, oscillator detuning is not possible on the Juno-60, but Roland added a beautiful sounding analog chorus effect to compensate for this. The result is an instrument with its own character and style that is treasured in synthesizer history.

The Roland Juno-60 has been used by a plethora of famous bands, producers and artists such as Enya, The Cure, Sean Lennon, Astral Projection, Vince Clarke, Men at Work, Flock of Seagulls, Howard Jones, Eurythmics, Billy Idol, The Cure, INXS, Ultravox, Nik Kershaw and many others.

Please fill out the form below and a Vintage King Audio Consultant will contact you with a ship date for the IK Multimedia Syntronik J-60 Synth - Electronic Delivery.

Have a better price in mind for the IK Multimedia Syntronik J-60 Synth - Electronic Delivery that you've been checking out? We're willing to work on it!Please fill out the form below with your contact information.Once the form is submitted, a Vintage King Audio Consultant will contact you as soon as possible with our best price on this product.