$ 79 .99
No interest if paid in full within 18 months Learn more
In Stock - Fastest eDelivery 24/7!
This product is delivered by download. Once your order is complete, you will receive a license code via email within minutes. Note: Software is not returnable, so please call if you need advice about compatibility or version. 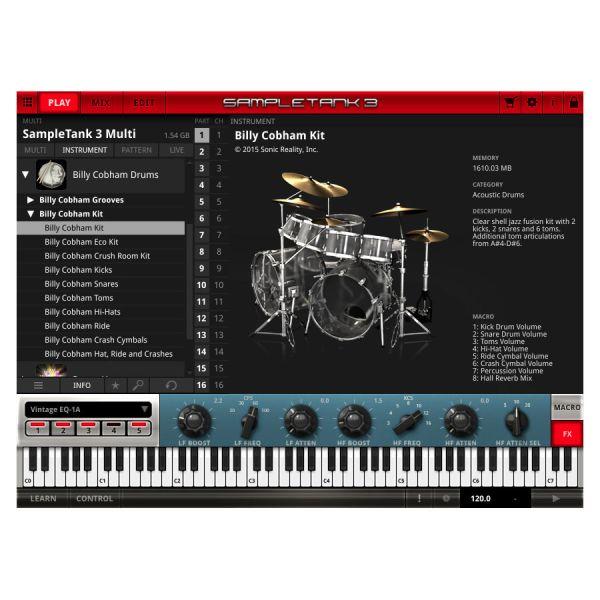 IK Multimedia Billy Cobham Drums is a new high definition drum and groove SampleTank 3 instruments collection. It includes more than 2 amazing gigabytes of over 2,000 meticulously recorded drum samples that include more than 400 audio grooves played by Billy Cobham, the legendary Mahavishnu Orchestra and Miles Davis drummer whose amazing performances continue to inspire generations of musicians both old and new.

Billy Cobham Drums was recorded by legendary producer-engineer, Ken Scott, who produced the jazz fusion classic album, “Birds of Fire” by Mahavishnu Orchestra with Billy on drums. IK US founder and Executive Producer, Dave Kerzner, reunited the two legends at Long View Farm Studio in Massachusetts where they recorded the samples for this instrument on a classic Trident A Range console, the same as was used on the “Birds of Fire” album. For supreme authenticity, a clear-shell Fibes drum kit was flown in from Los Angeles just for these sessions.

No expense was spared in miking this highly stylized drum kit. 8 Neumann® U67 tube microphones were used on the session so that even each tom could be miked with one. Every detail and nuance of his kit and performance style is captured with 8 velocities per drum using as many as 8 round robins per velocity.

In addition to the full kit instrument, you get individual SampleTank instruments for his kick drums, snare drums, toms, hi-hats, ride cymbal and crash cymbals so that you can customize the sounds, adding effects and perform individual instrument processing on each element using multiple parts in SampleTank. Add some extra compression to the kick drum, a little more reverb to the snare drum, some high-end sizzle to the hi-hats, each without affecting the other elements of the kit.

The drums are mapped using an extended General MIDI mapping so you can mix-and-match kit elements from the Billy Cobham Kit with elements from other SampleTank 3 factory drum kits, or other drum libraries available in the Custom Shop like the Neil Peart Kit.

Billy Cobham Drums also includes audio grooves played by the man himself in the style of many of his favorite Mahavishnu Orchestra songs. There are 14 SampleTank 3 instruments grouped as “songs,” each at its own tempo. And thanks to SampleTank 3’s STRETCH engine, you can easily change the tempo of the audio grooves without affecting the pitch of the drums.

Billy Cobham Drums is perfect for pop, funk, hip hop, jazz fusion, rock, blues and nearly any kind of music where you a need a deeply expressive audiophile drum track that has been recorded without compromise.

Please fill out the form below and a Vintage King Audio Consultant will contact you with a ship date for the IK Multimedia ST3 - Billy Cobham Drums - Electronic Delivery.

Have a better price in mind for the IK Multimedia ST3 - Billy Cobham Drums - Electronic Delivery that you've been checking out? We're willing to work on it!Please fill out the form below with your contact information.Once the form is submitted, a Vintage King Audio Consultant will contact you as soon as possible with our best price on this product.