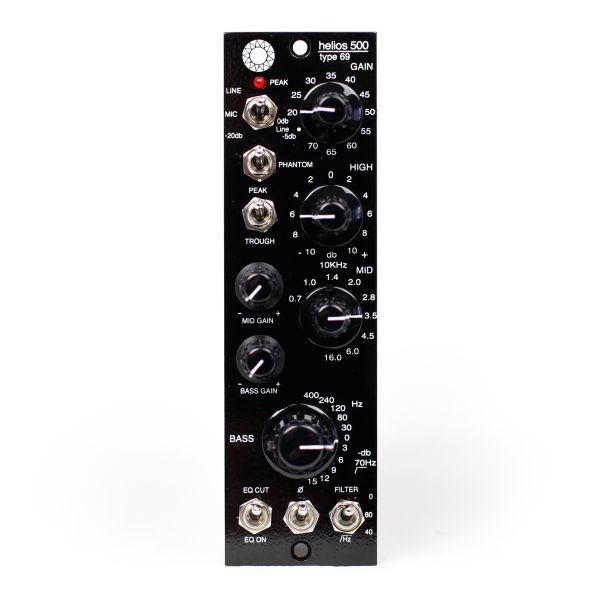 The Helios Type 69-500 500 Series module holds true to the original Dick Swettenham design, but with a number of modern updates such as 5db steps on the mic preamp gain switch as opposed to the original 10db steps, additional 16khz EQ frequency selection for today's high-bandwidth digital recordings, and a balanced output for easy interfacing with any digital converter.

Re-manufactured classic three-band mic pre/EQ. Discrete. Switchable lo/mid. Fixed top. Hi-pass. Unlike anything you have ever used (especially if you are stuck in API-Neve land). You will find the Type 69 a unique departure. These hand-built units have a Sowter input transformer based on the highly desirable Lustraphone (Olympic) transformer models. The mids are so funky and sweet – guitars and snare drums from heaven; woody and sweet! 700 to 2k to die for! Lows are reminiscent of Pultecs. Highs are sweet and musical. An extremely open mic pre; in mic shootouts, these are as open as the king daddy Telefunken V76m. Transform your life!

The legendary Helios Electronics Ltd. has resurrected with much anticipation and patience, the Olympic Type 69 Series EQ as used by the Beatles, Rolling Stones, Bob Marley, Led Zeppelin and so many others. In its heyday, Helios became known as the musician's choice of recording consoles.

Brought in line with modern expectations, these units are built to military specifications with supervision of gear fanatic and music producer Tony Arnold. Endorsed by the late Dick Swettenham, of the original Helios Electronics Ltd., to maintain and service all of the original consoles, Tony later purchased the original company, including all of its circuits and parts.

The modern circuit is similar to the original, aside from one vast improvement - the build quality and reliability. The openness and clarity has been upheld, with the addition of EQ frequency selections. Tony Arnold explains, "We asked many of the original users of the Helios desks what they felt was missing and if we could make any improvements. Most wanted the 30Hz added to the Low EQ. In order to meet today’s CD standards, some wanted a tight high frequency around 16k, which has been added without changing the original Helios sound whatsoever."

"WON'T GET FOOLED AGAIN was recorded on the Stones mobile using 69s. These modules are the ones that re-create the sound I remember. On acoustic guitar a little 10k and 2.4, and a slight bass cut with a Neumann U87 and there is Glyn Johns 1970. Straight out of the box. It's spooky."
Pete Townshend

Please fill out the form below and a Vintage King Audio Consultant will contact you with a ship date for the Helios Type 69-500 - 500 Series Mic Pre/EQ.

Have a better price in mind for the Helios Type 69-500 - 500 Series Mic Pre/EQ that you've been checking out? We're willing to work on it!Please fill out the form below with your contact information.Once the form is submitted, a Vintage King Audio Consultant will contact you as soon as possible with our best price on this product.