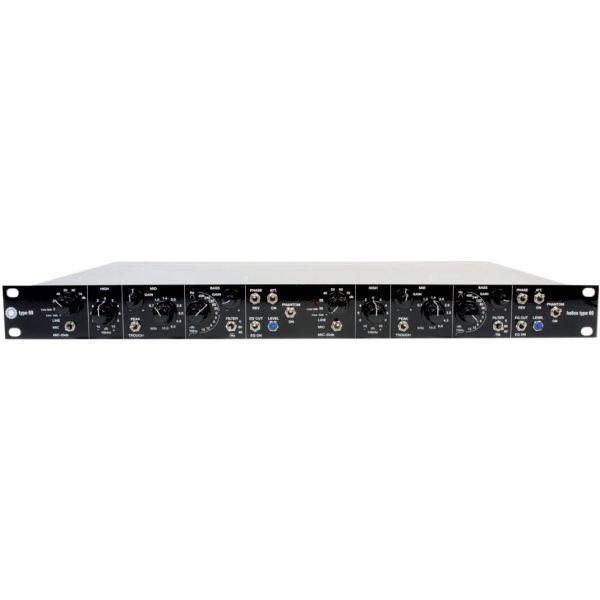 The Helios 1r Stereo Type 69 Mic Pre/Eq is built in an aluminum case and has a glossy black front panel with white silk-screened labeling.  The unit is well constructed and neatly wired using all discrete components (no chips).  It runs on a 32-volt rail supplied from an internal OEM switching power supply.  The mic preamp uses a Sowter Type 8666X input transformer based on the highly desirable Lustraphone (Olympic Sound Studios) transformer model.  Input impedance is 1,200 ohms.  A separate switchable secondary winding provides for -20 dB of mic attenuation.

Front panel controls for each channel start on the left side with the mic/line gain switching and a small output-level clip LED.  A toggle switch selects between mic, -20dB mic attenuation and the 10k-ohm line input.  A seven-position Elma rotary switch doubles as both line input and mic input gain control.  There are -5dB and 0dB line gain positions.  The five mic gain positions start at 20 dB and go to 70 dB in 10dB steps.  Other toggle switches include phase (polarity) flip, EQ cut, mic phantom powering on/off and the ATT switch, where you can engage a small front panel trim pot for a small range of input level adjustment.

The 3-band passive equalizer section uses a combination of RC and LC tone circuits, starting with an RC-based, 10kHz, 6dB-per-octave shelving filter with +/- 10dB range.  The LC-based midrange equalizer has a surprising number of frequency choices on a single knob.  They are: 0.7, 1, 1.4, 2, 2.8, 3.5, 4.5, 6 and 16 kHz.  There is a Peak and Trough toggle switch.  (Trough is Brit-speak for cut.) Up to 15 dB of boost/cut is available on the unmarked +/- control.  The starting Q for the midrange is a wide three octaves at 700 Hz; then, by 6 kHz, it narrows to two octaves.  Q is proportionate: The more boost/cut, the higher the Q.

The LC-based bass section allows up to 15dB boost/cut, and when the control is fully counterclockwise, the bass EQ section is switched out of the signal path.  This is good for keeping things ultra-clean.  Another rotary Elma switch selects 30, 80, 120, 240 and 400 Hz for the bass peaking section.  The same switch rotates to a 6dB-per-octave shelving filter mode that's fixed at 70 Hz with 3, 6, 9, 12 or 15 dB of roll-off.  If you like to boost bass and roll-off at the same time, then use the peaking section and select another 12dB-per-octave roll-off filter at 40 or 80 Hz.

The output section is unbalanced and uses an emitter follower circuit and a Philips/BEC electrolytic coupling capacitor, much like what's in the original Helios design.  Swettenham found that the engineers at Olympic Studios preferred the sound of this circuit compared to the best output transformers.

Please fill out the form below and a Vintage King Audio Consultant will contact you with a ship date for the Helios 1r Stereo Type 69 Mic Pre/EQ.

Have a better price in mind for the Helios 1r Stereo Type 69 Mic Pre/EQ that you've been checking out? We're willing to work on it!Please fill out the form below with your contact information.Once the form is submitted, a Vintage King Audio Consultant will contact you as soon as possible with our best price on this product.