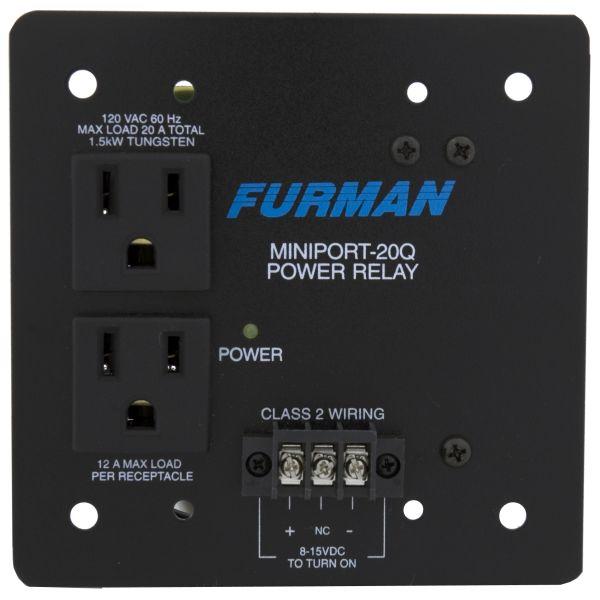 The Furman MINIPORT-20 Power Relay is a UL/CUL listed, 20 amp, relay switched 120 VAC outlet, with a terminal strip that allows remote control via safe, inexpensive, low voltage Class 2 wiring.  Also available is the MINIPORT-15, which is functionally identical except for its 15 amp rating.  Both models include an internal 12 VDC supply, and can be controlled from a remote location with maintained or momentary contact switches.

Multiple MINIPORTs may be connected together so that all are controlled by a single switch closure, and may be linked so that all turn on simultaneously or one by one, in a delayed sequence.  If delayed, the delay interval between the turn-on of one MINIPORT and the next is approximately three seconds.  (Delayed turn-on is useful in avoiding large inrush currents that can trip house circuit breakers, that would otherwise occur if all amps were turned on simultaneously.)  Turn-off always occurs simultaneously, however.

A Furman PowerLink can also be used to control MINIPORT(s).  In this use, the MINIPORT(s) areconnected to terminals on the PowerLink, which provide the necessary control functions. MINIPORTs are similarly compatible with the Furman PowerPort and ASD-120 Sequenced Power Distro.  With the addition of a PS-REL AC Relay to provide control, a MINIPORT can be used to extend the capacity of any other Furman power product — or, for that matter, any product with a switched outlet, such as a receiver/ amp controlled with a wireless remote.  When used in this manner, the MINIPORT is switched on or off when the outlet that the PS-REL is plugged into goes on or off.

Both the MINIPORT-15 and the MINIPORT-20 come equipped with two knockout holes for permanent installation with 1/2" conduit — one on the top surface, the other on the bottom.  Use of the bottom knockout hole requires removing the AC cord.  According to the National Electrical Code, 1/2" conduit can accommodate up to five 20 amp circuits using ten THWN 12 gauge stranded wires; however, local codes should be checked for exact requirements.

The MINIPORT-15Q (15amp) and the MINIPORT-20Q (20amp) provide a pair of remotely activated, relay-controlled outlets which are both set up for mounting in any standard electrical Quad Box, either directly or with a "mud ring" attached.

Due to the space limitations of a Quad Box, the "Q" MINIPORT models have a smaller feature set than the MINIPORT-15 and MINIPORT-20. The MP-15Q and MP-20Q have no internal power supply; a maintained 10-30VDC supply capable of supplying 10 mA is required to turn on the outlets.  This can be supplied by a Furman PowerLink, ASD-120 or PS-8R (with a simple internal modification to the PS-8R). UL, C-UL pending.

Please fill out the form below and a Vintage King Audio Consultant will contact you with a ship date for the Furman MP-20Q.

Have a better price in mind for the Furman MP-20Q that you've been checking out? We're willing to work on it!Please fill out the form below with your contact information.Once the form is submitted, a Vintage King Audio Consultant will contact you as soon as possible with our best price on this product.

VIEW
5753
I would like to thank VK for the wonderful sales assistance, service and prices. This was my first purchase with you and it won't be my last. I only wish I'd discovered you years ago!
Matthew R.
I had two Grammy wins this year - Ray LaMontagne & Carolina Chocolate Drops. Both made with help from Vintage King!
Ryan F.
In almost 20 years in Pro audio buying, never did I receive a unit so well packed and exactly as described. Works flawlessly. The whole process has been so smooth. I will never hesitate to do business with you guys in the future and will recommend you to everyone I know.
Martin C.
This was my first experience buying something from Vintage King (although I surf the "used" categories on the website frequently!), and, despite being on the other side of the world, I had absolutely no trouble and everything went very smoothly.
Phil T.
The speed of delivery exceeded my expectations! I was VERY pleased that my shipment arrived in time for a scheduled vocal tracking session. The packing insured that my order arrived safely. And the sales staff responded quickly to questions regarding the product.
James P.
Thank you so much! Vintage King has been so fair and easy to work with. I can't thank you enough. It feels good to trust such a hefty purchase to folks who are so helpful and knowledgeable. Vintage King is a sound designers dream store.
Noa L.
You guys have excellent customer service and I am excited about the next upgrade I complete on my fifth recording facility. I've been in the studio business for forty plus years. The salesman I worked with at Vintage King was the best of the best. You all rock!
Robby T.
I would recommend Vintage King to any one looking for top-class gear, unbeatable customer service and the best prices on the map!
Jake D.
My experience with Vintage King was excellent. The order was here fast considering it was out of stock. The sales person had SKB send it to me directly and I couldn't have been more pleased.
Michael D.
From the minute I placed my order I was kept well-informed through each step in your process. Even though I was buying a comparatively modest piece of gear, your attention to detail made me feel like I was purchasing a six-figure mixing desk.
Thomas W.
I am a new customer of yours. You guys provided me the absolute best deals in ordering all the equipment to power my brand new recording studio. Your customer service is amazing and i will always deal with you from here on out.
Rob M.
Thanks for your great service and getting this out today. You guys really are the Kings!
Alan B.
Better than expected! Truly impeccable service. Your team was professional, knowledgeable, provided speedy delivery above and beyond standard. Vintage King Audio is definitely my go to for all of my audio and information needs.
James O.