$ 3,499 .99
Your Savings: $ 500 .00 Msrp: $ 3,999 .99
or $98/month for 36 months 0% interest for 36 months. 36 equal monthly payments required. Learn more
Special Order
Note: This item may not be returnable or could require a restocking fee. Contact one of our Audio Consultants for more details. Due to the special nature of this item, we order each unit fresh from the factory, exclusively for you! Lead times may vary so please chat, call or email for up-to-date inventory status. 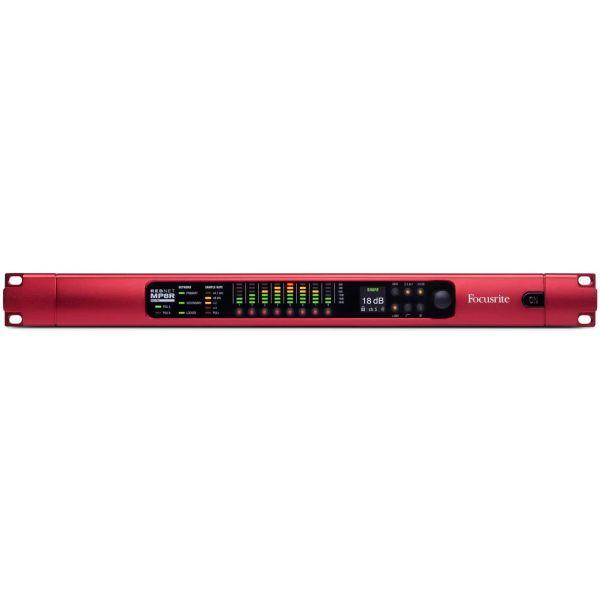 The Focusrite RedNet MP8R is an 8-channel remote-controlled microphone preamplifier and A/D for the Dante audio-over-IP network, designed specifically for the live sound/recording and broadcast environments, and other workflows where reliability is paramount, with Ethernet and power supply redundancy. The MP8R features eight high-quality remote-controlled mic preamps developed specifically for the RedNet range, and backed by thirty years of mic preamplifier development. Each preamp has a dual input impedance of 10k or 2.4k ohms, allowing flexibility when running multiple mic pres in parallel. The device includes eight auxiliary outputs with automatic DSP-based gain tracking for digital “splits”. Following the mic pres are eight channels of Focusrite’s legendary high-precision A/D converters, operating at up to 192kHz/24-bit with minimum latency and offering class-leading dynamic range and overall performance. The MP8R features a rugged, roadworthy exterior and high internal build quality. In addition, the unit offers a compact 1U rack-mount form factor.

Please fill out the form below and a Vintage King Audio Consultant will contact you with a ship date for the Focusrite RedNet MP8R 8-Channel Mic Pre and A/D.

Have a better price in mind for the Focusrite RedNet MP8R 8-Channel Mic Pre and A/D that you've been checking out? We're willing to work on it!Please fill out the form below with your contact information.Once the form is submitted, a Vintage King Audio Consultant will contact you as soon as possible with our best price on this product.