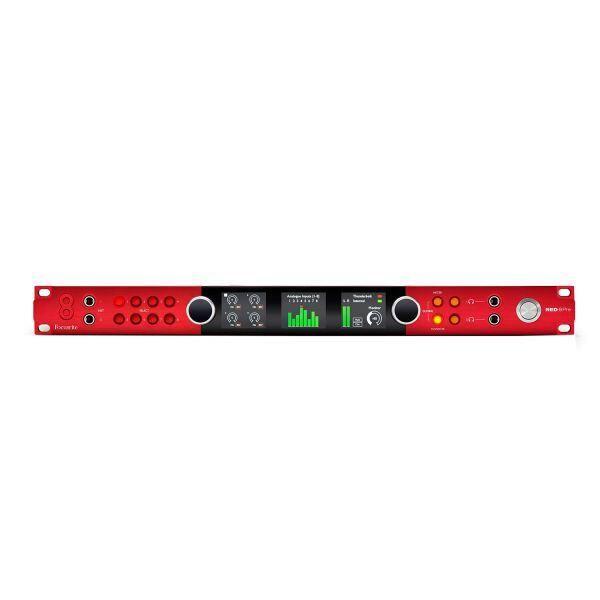 The Focusrite Red 8Pre features both Thunderbolt 2 connectivity and dual mini-DigiLink ports allowing you the best of both Core Audio and Pro Tools | HD workflows. Take Red 8Pre on the road for location recording over Thunderbolt then connect the same interface to Pro Tools|HDX or Pro Tools|HD Native back at the studio for mixdown. Switch easily between Pro Tools | HD and any Thunderbolt-connected DAW with Host Mode. The combination of low-latency conversion and driver technology allows real-time foldback mixes to be created in the DAW while you continue to use your native plug-ins. Unlike many interfaces, both mini-DigiLink and Thunderbolt 2 connectivity comes as standard, so there's no need to buy an additional option card.

Focusrite's Red Evolution mic pres draw on many decades of design prowess as well as many of the elements behind the incredibly popular RedNet mic pre used in many studios, broadcast facilities and live performances around the world. The digitally-controlled mic pres deliver a clear and honest sound with very low noise and plenty of gain available for the most-quiet of sources. They can be controlled from the front panel or remotely over Thunderbolt using RedNet Control. Additionally the mic pre settings can be saved and recalled allowing you to quickly re-setup for your next session. They also include the unique 'Air' effect, recreating the sound of the transformer-based mic preamps in the ISA and original Red ranges. When 'Air' is enabled, the microphone impedance is lowered and the sound is given a subtle mid-high boost – all in the analogue domain.

Focusrite has been designing digital converters for over 20 years. From the original Blue 245 and 260 mastering-grade A-D and D-A, through the Liquid Channel and more recently RedNet, digital conversion is a key part of Focusrite's design heritage and philosophy. Every converter Focusrite designs starts with the same objectives: low latency, high dynamic range and a flat, wide frequency response. Red 8Pre's conversion achieves just that, lightning fast performance, a dynamic range of 118dB A-D and 121dB D-A and a flat response to 35 kHz. By using “parallel path summing" they have achieved even greater noise-performance than ever.

While Red 8Pre has enough I/O for many scenarios, sometimes more is needed. That's why Red 8Pre includes two ADAT ports, for up to 16 additional inputs and outputs. Simply connect any ADAT equipment, such as the Focusrite Octopre, using light pipes. However in today's modern studio, audio networking is taking over. Focusrite's RedNet range is the world's most popular modular audio-over-IP platform. We've brought some of that technology to Red 8Pre, allowing up to 32 channels of Dante inputs and outputs to be connected. Simply plug in an Ethernet cable and add additional mic pres or line I/O with ease. Alternatively arrive at the studio or venue and simply connect one Ethernet cable to Red 8Pre to gain access to the whole network. The possibilities are huge.

Since Red 8Pre allows the user to assign any physical input or output to any driver/Pro Tools|HD channel, it's easier than ever to customise the interface layout and integrate hardware inserts. Simply open RedNet Control software and reallocate the channels as required.

Monitoring latency is the enemy of any performer and if the performance isn't excellent, the final mix won't be either. By utilising the lowest-latency conversion available, coupled with a high-performance Core Audio driver, Red 8Pre's analogue round trip latency is kept to an exceptionally low minimum of 1.67ms.

The Focusrite Studio Console Reborn In Your DAW

The Focusrite Studio Console defined countless hits of the 80s and 90s, thanks in large part to its ISA 110 Equaliser and ISA 130 Dynamics Modules. Brainworx's bx_console Focusrite plug-in brings you stunningly accurate emulations of both in a single plug-in, perfectly capturing the famously warm, open sound of two of the most revered pieces of studio hardware ever made.

Two of the most revered pieces of recording gear in the history of music production, the Focusrite ISA 110 Equaliser and ISA 130 Dynamics Modules helped to shape the sonic landscape of the 1980s and 90s. They were key components in the original Focusrite Studio Console, their unique specification, exceptional build quality and impressive versatility delivering a beautifully open sound that found favor among audio engineers the world over. With less than ten Studio Consoles still in existence and the ISA Modules commanding sky-high prices on the second-hand market, their very special brand of audio magic has been utterly inaccessible to all but the most privileged of producers… until now!

Designed and coded by the DSP geniuses at acclaimed software house Brainworx, the new bx_console Focusrite VST/AU/AAX plug-in for Mac and PC faithfully captures the sound, feel and styling of Focusrite’s original iconic hardware – and it’s included for free with every Clarett and Red audio interface.

Accurately modeling the full signal paths of the ISA 110 and ISA 130, bx_console Focusrite brings all the analogue character and coloration of the Focusrite Studio Console to your DAW-based productions. Offering four bands of parametric and shelving EQ, high- and low-pass filters, compression/limiting, gating/expansion and de-essing, it’s as powerful a sound-shaping tool today as it ever was – indeed, it improves on the capabilities of the original with modifications including continuously variable THD and Gain controls. And with Brainworx’s Tolerance Modeling Technology providing 72 selectable modeled circuits, you can even recreate the subtle timbral variations between channels that you’d get with the real console.

With bx_console Focusrite retailing separately for $349, its inclusion for free with all Clarett and Red interfaces is a huge deal. To download the plug-in, simply register your Clarett or Red audio interface online, then log into your Customer Portal page, where you’ll see bx_console Focusrite listed in the My Software page among your registered products.

Please fill out the form below and a Vintage King Audio Consultant will contact you with a ship date for the Focusrite Red 8Pre.

Have a better price in mind for the Focusrite Red 8Pre that you've been checking out? We're willing to work on it!Please fill out the form below with your contact information.Once the form is submitted, a Vintage King Audio Consultant will contact you as soon as possible with our best price on this product.

VIEW
63044
I would like to thank VK for the wonderful sales assistance, service and prices. This was my first purchase with you and it won't be my last. I only wish I'd discovered you years ago!
Matthew R.
I had two Grammy wins this year - Ray LaMontagne & Carolina Chocolate Drops. Both made with help from Vintage King!
Ryan F.
In almost 20 years in Pro audio buying, never did I receive a unit so well packed and exactly as described. Works flawlessly. The whole process has been so smooth. I will never hesitate to do business with you guys in the future and will recommend you to everyone I know.
Martin C.
This was my first experience buying something from Vintage King (although I surf the "used" categories on the website frequently!), and, despite being on the other side of the world, I had absolutely no trouble and everything went very smoothly.
Phil T.
The speed of delivery exceeded my expectations! I was VERY pleased that my shipment arrived in time for a scheduled vocal tracking session. The packing insured that my order arrived safely. And the sales staff responded quickly to questions regarding the product.
James P.
Thank you so much! Vintage King has been so fair and easy to work with. I can't thank you enough. It feels good to trust such a hefty purchase to folks who are so helpful and knowledgeable. Vintage King is a sound designers dream store.
Noa L.
You guys have excellent customer service and I am excited about the next upgrade I complete on my fifth recording facility. I've been in the studio business for forty plus years. The salesman I worked with at Vintage King was the best of the best. You all rock!
Robby T.
I would recommend Vintage King to any one looking for top-class gear, unbeatable customer service and the best prices on the map!
Jake D.
My experience with Vintage King was excellent. The order was here fast considering it was out of stock. The sales person had SKB send it to me directly and I couldn't have been more pleased.
Michael D.
From the minute I placed my order I was kept well-informed through each step in your process. Even though I was buying a comparatively modest piece of gear, your attention to detail made me feel like I was purchasing a six-figure mixing desk.
Thomas W.
I am a new customer of yours. You guys provided me the absolute best deals in ordering all the equipment to power my brand new recording studio. Your customer service is amazing and i will always deal with you from here on out.
Rob M.
Thanks for your great service and getting this out today. You guys really are the Kings!
Alan B.
Better than expected! Truly impeccable service. Your team was professional, knowledgeable, provided speedy delivery above and beyond standard. Vintage King Audio is definitely my go to for all of my audio and information needs.
James O.