$ 749 .99
Your Savings: $ 130 .00 Msrp: $ 879 .99
No interest if paid in full within 12 months Learn more
Special Order
Note: This item may not be returnable or could require a restocking fee. Contact one of our Audio Consultants for more details. Due to the special nature of this item, we order each unit fresh from the factory, exclusively for you! Lead times may vary so please chat, call or email for up-to-date inventory status. 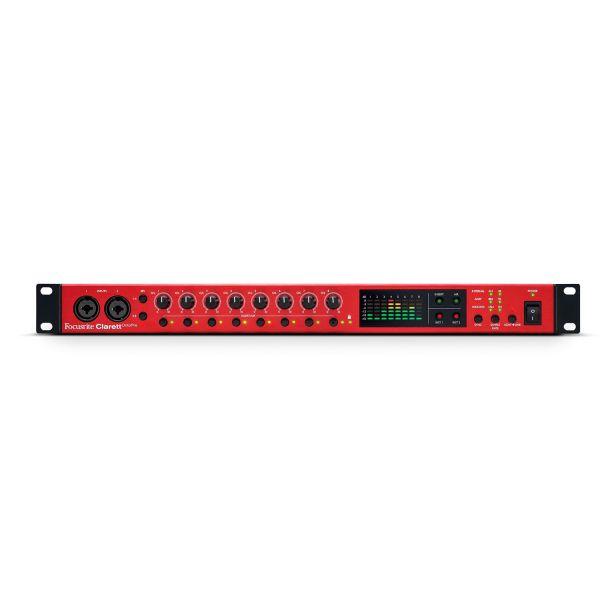 The Focusrite Clarett OctoPre provides eight specially-designed Clarett mic pres and 24-bit, 192 kHz AD/DA conversion that can be used to extend the capabilities of a Clarett interface – or any other interface fitted with ADAT optical inputs and outputs. In addition to the mic preamps there are eight channels of D-A conversion providing eight analog outputs.

The eight mic preamps feature automatic mic/line switching inputs and two front-panel instrument inputs. Designed specifically for the Clarett range, they offer plenty of gain, yet low noise and distortion - and great sound quality. They also include a special 'Air' feature that switches in an analog model of the classic transformer-based Focusrite ISA mic pre, switching the impedance of the preamp to that of the original ISA and enabling a transformer resonance effect, giving microphone sources the air and clarity of an ISA transformer-based mic pre-recording. In addition, the mic preamps have plenty of headroom and are ideal for recording drums and other extreme level sources.

The front panel instrument inputs feature extra headroom to handle high-output pickups, while the rear panel includes universal XLR/jack connectors for the remaining auto-switching mic/line inputs. In addition, each input has its own switched insertion point for single-cable connection of compression, equalization and other outboard analog processing - with hard-wired relay bypass, so you can leave outboard gear or a patchbay connected ready to access at the press of a button. The inputs drive eight channels of precision 24-bit Focusrite A-D with 118 dB dynamic range and standard sample rates up to 192 kHz.

In addition to providing eight mic preamps, the Clarett OctoPre offers DA conversion (from the ADAT inputs, with 119 dB dynamic range) of up to eight channels, making it perfect for mixing as well as tracking. The outputs appear on a 25-pin DSUB connector with standard wiring. The line outputs can optionally provide line level output feeds from the mic pres – useful for feeding a live console, for example, while recording the digital outputs. Aside from the insert point, the Clarett OctoPre is balanced end-to-end for maximum noise immunity.

Please fill out the form below and a Vintage King Audio Consultant will contact you with a ship date for the Focusrite Clarett OctoPre AD/DA Converter with Preamps.

Have a better price in mind for the Focusrite Clarett OctoPre AD/DA Converter with Preamps that you've been checking out? We're willing to work on it!Please fill out the form below with your contact information.Once the form is submitted, a Vintage King Audio Consultant will contact you as soon as possible with our best price on this product.