$ 149 .00
or $5/month for 36 months 0% interest for 36 months. 36 equal monthly payments required. Learn more
In Stock - Fastest eDelivery 24/7!
This product is delivered by download. Once your order is complete, you will receive a license code via email within minutes. Note: Software is not returnable, so please call if you need advice about compatibility or version. 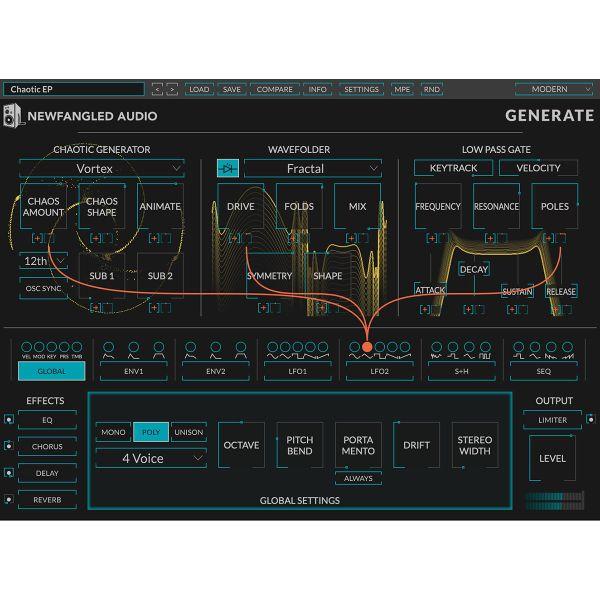 Generate is based on a set of chaotic generators. What initially looks like randomness contains underlying patterns, interconnectedness, constant feedback loops, repetition, self-similarity, fractals, and self-organization. Each of Generate’s 5 chaotic generators brings out these underlying patterns and create an oscillator that can smoothly fade from a sine wave to total chaos, with an expanse of territory to explore in between. The musical textures created include distortion, harmonics, grunge, static, and noise—All of which can be predictably or unpredictably modulated.

Generate's chaotic generators are routed through your choice of a Buchla wavefolder, or novel Animated or Fractal wavefolders, each adding unique overtones. Followed by a low pass gate inspired by the ideas of Don Buchla. These modules combine to create a versatile and musical voice with it’s own unique flavor.

Every parameter in Generate’s voice can be modulated by a combination of two Envelope Generators, two LFOs, a Sample and Hold/Random generator, an 8 Step Sequencer, and MIDI and MPE sources. The innovative modulation interface allows you to easily and quickly patch any combination of sources to any destination, creating sounds that move, and which move you.

Generate's voice is followed by an unparalleled EQ, Chorus, Delay, Reverb, and Limiter, all to launch your chaotic sounds into outer space or right into your listeners faces.

Over 450 Presets Including Artists:

Eventide test their desktop plug-ins in Ableton Live, Cubase, FL Studio, Logic Pro, Pro Tools, and Studio One. However, their plug-ins should work with any compatible host.

Please fill out the form below and a Vintage King Audio Consultant will contact you with a ship date for the Eventide Newfangled Generate Chaotic Oscillator Polysynth - Electronic Delivery.

Have a better price in mind for the Eventide Newfangled Generate Chaotic Oscillator Polysynth - Electronic Delivery that you've been checking out? We're willing to work on it!Please fill out the form below with your contact information.Once the form is submitted, a Vintage King Audio Consultant will contact you as soon as possible with our best price on this product.