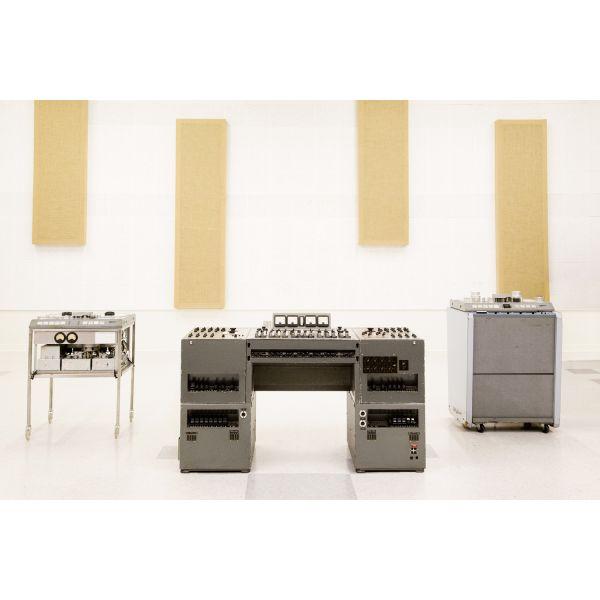 In one of the most coveted recording packages ever assembled, three incredible pieces of historic gear have been brought together for sale. At the heart of the package is Abbey Road Studios' legendary REDD.37 console (one of only three ever created), with this particular model being active in EMI Studio One and utilized on various recording sessions by The Beatles.

The History Of The REDD.37 Console

Based on the REDD.17 built by Peter Burkowitz, the REDD.37 is a continuation of this classic technology, pushed even further by Len Page and the Record Engineering Development Department (REDD) team. The console is constructed from five individual pieces and features an upgrade in the number of tracks and channels, in addition to the use of V72s mic preamps. To meet the 200 ohms impedance requirement utilized by all Abbey Road gear, the desk was specifically modded to fit these preamps, which involved adding a 168 ohm internal resistor.

A Decade Of Creating Timeless Recordings

The REDD.37 console included in this package was built in December 1958, as denoted by its serial number, #58121A (58 – the year, 12- the month). After being moved into EMI Studio One at Abbey Road, the console spent the better part of the next decade in the room and was used during various Beatles sessions from Meet The Beatles through their final release, Let It Be.

Since the 1990s, this REDD.37 console has been lovingly cared for by Lenny Kravitz, who has kept the desk in pristine condition. Whether you’re looking to own a piece of history or trying to capture the magic of the 1960’s London rock scene in your studio, this REDD.37 package is the ultimate combination of function, form and style.

Aside from the REDD.37 console, this package also features two equally historic tape machines, including the EMI/Abbey Roads Studios No.7 Studer J37. As one of only eight tape machines used at Abbey Road Studios, this piece of equipment was revolutionary, as it allowed producers and engineers to bounce tracks and pull-off accurate drop-ins while overdubbing. The Studer J37 is a four-track 1” multi-track tape machine, which records at both 7.5ips and 15ips, and features 52 tubes in its design. This make-up includes four record amplifiers, each with two ECC188 tubes, and four reproduce amplifiers, each with three ECC188s and an E283CC. The frequency response at 15ips was spec’d at 30Hz to 15kHz (+/-2dB).

The second tape machine included in this package is a Studer C37, which is a two-track stereo master recorder that runs 1/4 inch tape. As the predecessor to the J37, the C37 was released in the early 1960s and maintained its status as a studio favorite until being phased out in the 1970s. This tape machine records at both 7.5ips and 15ips, features the original C37 resin-body heads, offers balanced XLR input and output, CCIR – NAB selectable equalization and modular tube electronics, with independent Dual-Mono Rec and Play boards.

Note: Operates only on 230-240v 50 or 60 Hz - Suitable step up transformer or 240V service required for use in a 120V environment. No phantom power or direct outs are installed on the console.

Please fill out the form below and a Vintage King Audio Consultant will contact you with a ship date for the EMI Abbey Road REDD.37 Historic Beatles Console.

Have a better price in mind for the EMI Abbey Road REDD.37 Historic Beatles Console that you've been checking out? We're willing to work on it!Please fill out the form below with your contact information.Once the form is submitted, a Vintage King Audio Consultant will contact you as soon as possible with our best price on this product.

VIEW
62418
I would like to thank VK for the wonderful sales assistance, service and prices. This was my first purchase with you and it won't be my last. I only wish I'd discovered you years ago!
Matthew R.
I had two Grammy wins this year - Ray LaMontagne & Carolina Chocolate Drops. Both made with help from Vintage King!
Ryan F.
In almost 20 years in Pro audio buying, never did I receive a unit so well packed and exactly as described. Works flawlessly. The whole process has been so smooth. I will never hesitate to do business with you guys in the future and will recommend you to everyone I know.
Martin C.
This was my first experience buying something from Vintage King (although I surf the "used" categories on the website frequently!), and, despite being on the other side of the world, I had absolutely no trouble and everything went very smoothly.
Phil T.
The speed of delivery exceeded my expectations! I was VERY pleased that my shipment arrived in time for a scheduled vocal tracking session. The packing insured that my order arrived safely. And the sales staff responded quickly to questions regarding the product.
James P.
Thank you so much! Vintage King has been so fair and easy to work with. I can't thank you enough. It feels good to trust such a hefty purchase to folks who are so helpful and knowledgeable. Vintage King is a sound designers dream store.
Noa L.
You guys have excellent customer service and I am excited about the next upgrade I complete on my fifth recording facility. I've been in the studio business for forty plus years. The salesman I worked with at Vintage King was the best of the best. You all rock!
Robby T.
I would recommend Vintage King to any one looking for top-class gear, unbeatable customer service and the best prices on the map!
Jake D.
My experience with Vintage King was excellent. The order was here fast considering it was out of stock. The sales person had SKB send it to me directly and I couldn't have been more pleased.
Michael D.
From the minute I placed my order I was kept well-informed through each step in your process. Even though I was buying a comparatively modest piece of gear, your attention to detail made me feel like I was purchasing a six-figure mixing desk.
Thomas W.
I am a new customer of yours. You guys provided me the absolute best deals in ordering all the equipment to power my brand new recording studio. Your customer service is amazing and i will always deal with you from here on out.
Rob M.
Thanks for your great service and getting this out today. You guys really are the Kings!
Alan B.
Better than expected! Truly impeccable service. Your team was professional, knowledgeable, provided speedy delivery above and beyond standard. Vintage King Audio is definitely my go to for all of my audio and information needs.
James O.