$ 179 .00
No interest if paid in full within 12 months Learn more
Special Order
Note: This item may not be returnable or could require a restocking fee. Contact one of our Audio Consultants for more details. Due to the special nature of this item, we order each unit fresh from the factory, exclusively for you! Lead times may vary so please chat, call or email for up-to-date inventory status. 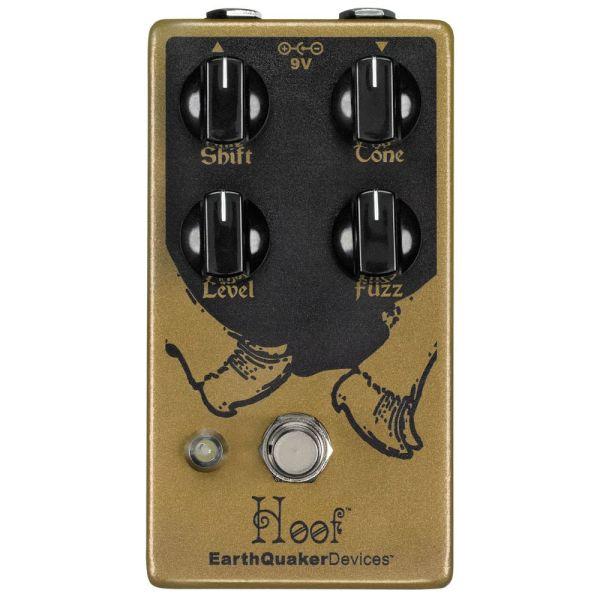 What to say about the EarthQuaker Devices Hoof that hasn’t already been said? EarthQuaker's flagship fuzz pedal can be found on thousands on pedaboards around the world and has rocked countless stages from stinky suburban basements to Madison Square Garden. Twice.

The Hoof is loosely based on the classic green Russian muff-style fuzz circuit, and features a hybrid Germanium/Silicon design, pairing maximum tone with maximum temperature stability not found in finicky and expensive vintage units. EarthQuaker hand-matches NOS Germanium transistors to exacting specifications for pedal-to-pedal consistency, taking the guesswork out of your fuzz purchase, and guaranteeing that your Hoof delivers the same smooth, natural, and harmonically rich sustain as all your friends’ Hoofs. All your friends have Hoof fuzzes, right?

The Hoof has a wide gain range, providing everything from dirty and organic amp-like overdrive, to monstrous fuzz madness. This, paired with the “Shift” control allows you total tonal access, as the “Shift” knob works with the “Tone” control to alter the overall frequency response of the Hoof.

Use the “Shift” to boost the highs for a glassy, cutting top-end; use it to cut out some low-mid mud; use it to add some thick stoner rock sludge; use it on bass; use it to combat the muff-style fuzz’s notorious “mid scoop;” use it however you’d like, just use it! The Hoof’s distinctive, fuzzy character is tight and controlled without sacrificing any “guts,” so to speak, so even the gnarliest fuzz tones will sit well in the mix.

The Hoof fuzz is all-analog, true bypass, and built one-at-a-time by real life human beans with four fingers and a thumb waiting in line for the horsey rides at the rustic frontierland amusement park of Akron, Ohio, USA. (The Official Center of the Universe.)

*New features in the V2 version.

Please fill out the form below and a Vintage King Audio Consultant will contact you with a ship date for the EarthQuaker Devices Hoof V2 Germanium/Silicon Fuzz Pedal.

Have a better price in mind for the EarthQuaker Devices Hoof V2 Germanium/Silicon Fuzz Pedal that you've been checking out? We're willing to work on it!Please fill out the form below with your contact information.Once the form is submitted, a Vintage King Audio Consultant will contact you as soon as possible with our best price on this product.

VIEW
75383
I would like to thank VK for the wonderful sales assistance, service and prices. This was my first purchase with you and it won't be my last. I only wish I'd discovered you years ago!
Matthew R.
I had two Grammy wins this year - Ray LaMontagne & Carolina Chocolate Drops. Both made with help from Vintage King!
Ryan F.
In almost 20 years in Pro audio buying, never did I receive a unit so well packed and exactly as described. Works flawlessly. The whole process has been so smooth. I will never hesitate to do business with you guys in the future and will recommend you to everyone I know.
Martin C.
This was my first experience buying something from Vintage King (although I surf the "used" categories on the website frequently!), and, despite being on the other side of the world, I had absolutely no trouble and everything went very smoothly.
Phil T.
The speed of delivery exceeded my expectations! I was VERY pleased that my shipment arrived in time for a scheduled vocal tracking session. The packing insured that my order arrived safely. And the sales staff responded quickly to questions regarding the product.
James P.
Thank you so much! Vintage King has been so fair and easy to work with. I can't thank you enough. It feels good to trust such a hefty purchase to folks who are so helpful and knowledgeable. Vintage King is a sound designers dream store.
Noa L.
You guys have excellent customer service and I am excited about the next upgrade I complete on my fifth recording facility. I've been in the studio business for forty plus years. The salesman I worked with at Vintage King was the best of the best. You all rock!
Robby T.
I would recommend Vintage King to any one looking for top-class gear, unbeatable customer service and the best prices on the map!
Jake D.
My experience with Vintage King was excellent. The order was here fast considering it was out of stock. The sales person had SKB send it to me directly and I couldn't have been more pleased.
Michael D.
From the minute I placed my order I was kept well-informed through each step in your process. Even though I was buying a comparatively modest piece of gear, your attention to detail made me feel like I was purchasing a six-figure mixing desk.
Thomas W.
I am a new customer of yours. You guys provided me the absolute best deals in ordering all the equipment to power my brand new recording studio. Your customer service is amazing and i will always deal with you from here on out.
Rob M.
Thanks for your great service and getting this out today. You guys really are the Kings!
Alan B.
Better than expected! Truly impeccable service. Your team was professional, knowledgeable, provided speedy delivery above and beyond standard. Vintage King Audio is definitely my go to for all of my audio and information needs.
James O.