$ 149 .00
No interest if paid in full within 12 months Learn more
Special Order
Note: This item may not be returnable or could require a restocking fee. Contact one of our Audio Consultants for more details. Due to the special nature of this item, we order each unit fresh from the factory, exclusively for you! Lead times may vary so please chat, call or email for up-to-date inventory status. 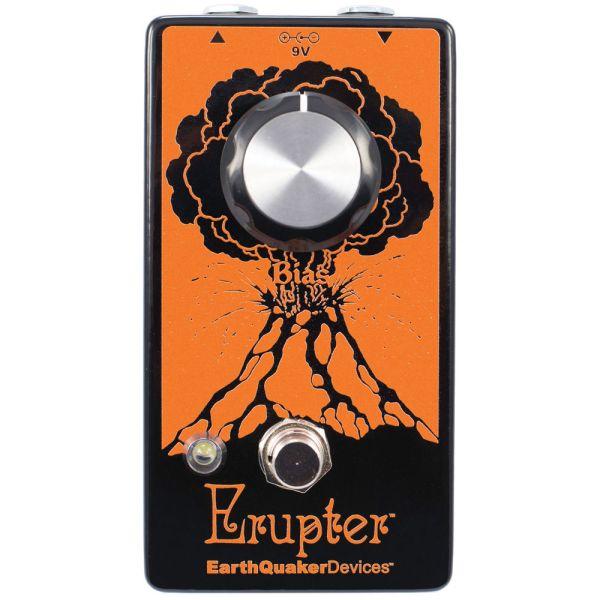 The Earthquaker Devices Erupter is the latest fuzz from Earthquaker. The Erupter is the ultimate fuzz tone featuring fixed master volume and gain output. Just one bias control knob allows for a fuzz that's either more saggy and spongy as the knob is positioned counter-clockwise, or a fuzz that becomes tighter and more focused, stacking more harmonics as it's turned clockwise. Chances are, you already crank your fuzz to ten, but where do you go from there? The Erupter gives you a fuzz that's always cranked but allows for exploration of every nuance and iteration from loose and raw, to bright and searing.

The Erupter is the result of over two years’ worth of tone-chasing, tweaking, and experimentation in search of the ultimate classic fuzz tone with a big low end (but not too mushy), a biting top end without being too harsh, and just enough output to politely send a tube amp over the top.

Earthquaker used every trick in the book to craft a classic fuzz Device that sounds good with any pickup type, anywhere in the chain (even before a wah pedal!) without any tone-sucking impedance mismatching. Each Erupter is built with a buffered input section, transformer-based pickup simulation, new production 5% ½ watt carbon composition resistors, metalized polyester film capacitors, Sprague and BC electrolytic capacitors, and low-gain, hand-matched NOS silicon transistors to deliver a well-rounded and defined fuzz tone with just enough pummeling intensity, so you can rock 'n' roll all night and still get to bed at a reasonable hour.

Erupter features a super-simple single knob setup that allows you to bias the Erupter’s NOS silicon transistors for the perfect sound and feel, while still being touch responsive and cleaning up nicely when you roll back the guitar’s volume and tone controls.

Low “Bias” settings yield a rude, spongy fuzz tone with plenty of sag and a blossoming attack envelope that’s gated without entering “dying battery” territory. As the “Bias” control is increased, additional harmonics stack atop the input signal, producing a stiffer, more complex fuzz tone with a tighter response, increased output, and longer sustain. A custom center-detent pot was made to fit the required resistance for the Erupter. When the Bias control is set at noon you will feel a little click. That means the pedal is perfectly biased to give the best possible fuzz tone.

The Erupter uses a fixed master output level and gain setting for the thickest fuzz possible and to push the full frequency range of the guitar out front when you kick it on.

Each and every Erupter is built by the hands of real-life dream warriors in the foothills of Mt. Akron, Ohio.

The Erupter can be powered by a 9v battery or a standard 9-volt DC power supply with a 2.1 mm negative center barrel. Pedal-specific, transformer-­isolated wall-wart power supplies or multiple isolated­-output supplies are always recommended. Pedals will make extra noise if there is ripple or unclean power. Switching-type power supplies, daisy chains and non-pedal specific power supplies do not filter dirty power as well and let through unwanted noise. Do not run at higher voltages!

This device is true bypass and uses electronic relay based switching. Audio will not pass without power.

Please fill out the form below and a Vintage King Audio Consultant will contact you with a ship date for the EarthQuaker Devices Erupter Perfect Fuzz Pedal.

Have a better price in mind for the EarthQuaker Devices Erupter Perfect Fuzz Pedal that you've been checking out? We're willing to work on it!Please fill out the form below with your contact information.Once the form is submitted, a Vintage King Audio Consultant will contact you as soon as possible with our best price on this product.