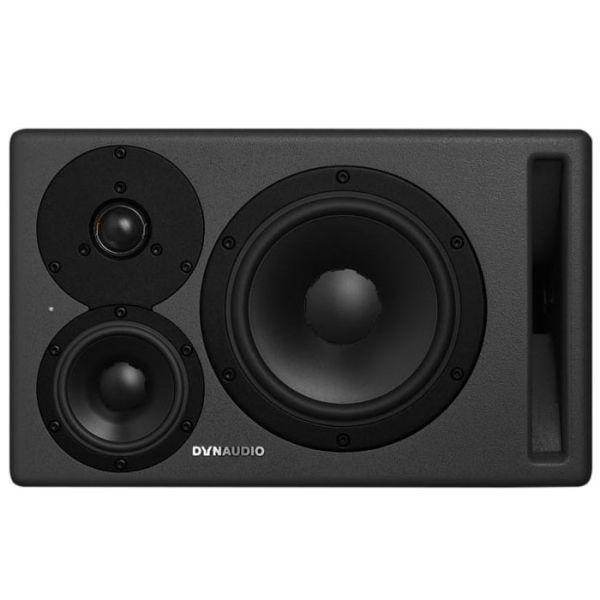 The Dynaudio Core 47 is the mid-size model of Dynaudio's flagship professional reference monitor series. Dynaudio engineers codenamed it ‘Bulldog’. You’ll know why when you fire it up.

This compact three-way monitor features an eyebrow-raising 500 W + 500 W + 150 W of Class D power from Pascal amplification, as well as sophisticated digital signal processing and a flat bass response down to 44 Hz at -3 dB, and 37 Hz at -6 dB with a gentle roll-off. And it reaches all the way up to 31 kHz – never let it be said monitoring can’t give you a real high.

The 4-inch midrange driver provides staggering detail. It uses Dynaudio's proprietary MSP (Magnesium Silicate Polymer) material in its one-piece cone for the perfect balance of lightness, stiffness and damping. That, coupled with an aluminum voice-coil and neodymium magnet system, means an incredibly fast response and authoritative control. With crossover points at 475 Hz and 5.25 kHz, Core 47 delivers so much more of the critical vocal range in one driver than typical designs, ensuring your mix decisions on vocal balances and dialogue subtleties are made with confidence.

Under the hood: brains as well as brawn

Dynaudio have given Core 47 the power to optimize itself for differing acoustic environments. There are three settings: Anechoic, for when the monitors are placed on stands in rooms that have sufficient dampening treatment (such as recording studios and dubbing stages); Desk, for when they’re on a workstation or meter bridge; and Soffit, for when they’re mounted in properly designed wall soffits as part of an overall architectural acoustic design. And that’s not all: you can also set boundary filters that compensate for walls or corners where low-frequency room modes can be triggered.

Input sensitivity tailored to your studio

The noise-floor and signal resolution of any monitoring system is critical to its performance. Whether you’re using the analog or digital inputs, you need to be able to control the gain staging between the monitor controller and the speaker system. Dynaudio provided a range of 0 dBu to +24 dBu to match the input sensitivity to the output level. Once optimized, Core 47 processes all analog signals at a 192 kHz sampling rate for the greatest degree of mathematical precision from the advanced DSP processor.

When using the AES digital inputs, there are two settings: one to determine which channel (L or R) of the AES stream is used for that monitor, and a second to determine the maximum output SPL. If you want maximum output SPL, set this to 112 dB (124 dB peak for a pair half space). If you work mostly at lower levels, choose a lower SPL setting to optimize the bit resolution of the AES input for the best linearity.

When using the AES input, Core 47’s DSP operates at the incoming sample rate and either locks to the AES clock or incoming word clock to maintain the most accurate signal possible. That means if you work in 48K, for example, you can send the signal straight to your speakers in 48K. It’s as simple as that. Unlike other competitors, there is no sample-rate conversion. You give it 192, it does 192.

Designed for every type of studio

Nice monitors for their size and price. I'm not an expert or professional mixer -- I mainly write, perform, record, and mix my own eclectic original music in a home "studio", though I have worked and been in some great control rooms (Warner and Evergreen sound scoring stage booths in California, for example), have used Dynaudio BM15As and BX15 sub (4-5 years), Dynaudio BM6As (10+ years), Dynaudio LYD48s (9 months), and have used Meyer HD1s, Focal Twins, Adam AX7s, and (perhaps best of all) Yamaha NS10Ms for many years for recording and mixing a wide variety of music from rock, pop, classical, so-called world music, and jazz; so although I'm not familiar with a lot of nearfield monitors in this general price range (ATC, PC, Quested, Barefoot, Genelec, Neumann, etc) I'm also not totally new to this. Since there are few user reviews of these speakers online at this point, I thought I'd offer some positive encouragement to at least give these a try.

If you're a Dynaudio fan and are considering these vs the less expensive LYD48s, I'd say, if possible, save up. Especially at louder volumes, the Core 47s offer a lot more kick (literally, the kick drum comes through much more solidly), greater power, as well as greater detail. The LYD48s start to wimp out around 60dB (at 1.5m) whereas the Core 47s are solid at least to to 75-85dB (I don't normally monitor even that loud).They aren't mains, so they're comparatively bass light (no thump in the chest), but there's more than enough there to mix with and -- importantly for producers -- to enjoy working on. I placed mine on stands either side of an iMac 27", and they're a good size for this arrangement because I could achieve an equilateral triangle of about 5' to the listening position without blocking the direct signal (though there is some sound lost in the wash behind the computer).

I use the past tense here because, although the Core 47s were great and probably more appropriate for my particular space, I opted to trade up for the larger Dynaudio Core 59s with their greater power and low-midrange oomph, which makes everything sound more “real.” The 59s are arguably overkill for many home/project studios, if one can swing the extra $1k, I obviously found them worth it.

I enjoyed not only excellent service from Vintage King in Ferndale, MI, I was able to get a great deal on a demo pair of the Core 47s, and to pick them up the same day. Salesperson Dan Ackerman expedited the whole thing and made sure the billing process went smoothly.

Please fill out the form below and a Vintage King Audio Consultant will contact you with a ship date for the Dynaudio Core 47 3-way Active Monitor - Left, Single.

Have a better price in mind for the Dynaudio Core 47 3-way Active Monitor - Left, Single that you've been checking out? We're willing to work on it!Please fill out the form below with your contact information.Once the form is submitted, a Vintage King Audio Consultant will contact you as soon as possible with our best price on this product.

VIEW
126347
I would like to thank VK for the wonderful sales assistance, service and prices. This was my first purchase with you and it won't be my last. I only wish I'd discovered you years ago!
Matthew R.
I had two Grammy wins this year - Ray LaMontagne & Carolina Chocolate Drops. Both made with help from Vintage King!
Ryan F.
In almost 20 years in Pro audio buying, never did I receive a unit so well packed and exactly as described. Works flawlessly. The whole process has been so smooth. I will never hesitate to do business with you guys in the future and will recommend you to everyone I know.
Martin C.
This was my first experience buying something from Vintage King (although I surf the "used" categories on the website frequently!), and, despite being on the other side of the world, I had absolutely no trouble and everything went very smoothly.
Phil T.
The speed of delivery exceeded my expectations! I was VERY pleased that my shipment arrived in time for a scheduled vocal tracking session. The packing insured that my order arrived safely. And the sales staff responded quickly to questions regarding the product.
James P.
Thank you so much! Vintage King has been so fair and easy to work with. I can't thank you enough. It feels good to trust such a hefty purchase to folks who are so helpful and knowledgeable. Vintage King is a sound designers dream store.
Noa L.
You guys have excellent customer service and I am excited about the next upgrade I complete on my fifth recording facility. I've been in the studio business for forty plus years. The salesman I worked with at Vintage King was the best of the best. You all rock!
Robby T.
I would recommend Vintage King to any one looking for top-class gear, unbeatable customer service and the best prices on the map!
Jake D.
My experience with Vintage King was excellent. The order was here fast considering it was out of stock. The sales person had SKB send it to me directly and I couldn't have been more pleased.
Michael D.
From the minute I placed my order I was kept well-informed through each step in your process. Even though I was buying a comparatively modest piece of gear, your attention to detail made me feel like I was purchasing a six-figure mixing desk.
Thomas W.
I am a new customer of yours. You guys provided me the absolute best deals in ordering all the equipment to power my brand new recording studio. Your customer service is amazing and i will always deal with you from here on out.
Rob M.
Thanks for your great service and getting this out today. You guys really are the Kings!
Alan B.
Better than expected! Truly impeccable service. Your team was professional, knowledgeable, provided speedy delivery above and beyond standard. Vintage King Audio is definitely my go to for all of my audio and information needs.
James O.