$ 349 .00
Your Savings: $ 50 .00 Msrp: $ 399 .00
or $15/month for 24 months 0% interest for 24 months. 24 equal monthly payments required. Learn more
Ships directly from Drawmer
Note: This item may not be returnable or could require a restocking fee. Contact one of our Audio Consultants for more details. This item ships directly to you from the manufacturer. To ensure that the manufacturer currently has stock, please chat, call or email for the latest availability status. 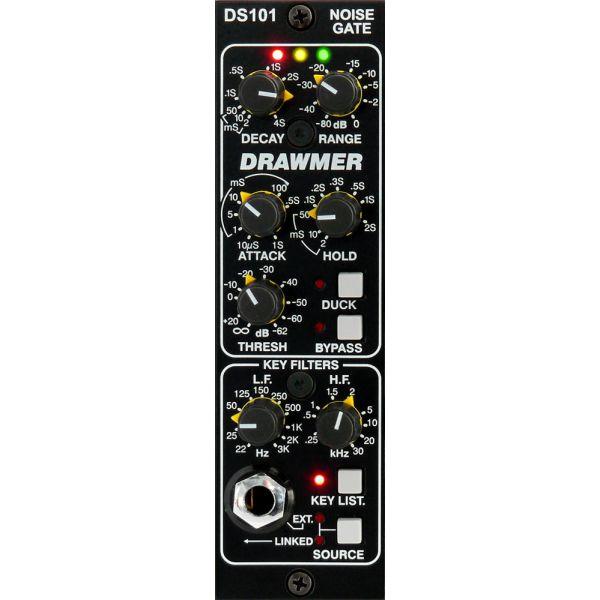 The DS101 is the first noise gate designed specifically for the 500 Series rack system and takes its place alongside the Drawmer family of industry standard Noise Gates, such as the DS201, DS501 and DS404. Anyone familiar with those units will immediately be at home with the DS101.

Based on a single-channel of the DS201 the DS101 is a sophisticated noise gate incorporating a number of features pioneered by Drawmer, which are invaluable to the sound engineer, such as variable high and lowpass filters for “frequency conscious gating.”

Other features include comprehensive envelope control, attack, hold, decay, and range, plus a whole host of other features, all adding up to one amazing processor.

When placed side by side in a 500 series rack two or more gates can be linked using the new infra red triggering mechanism employed on the DS101. This means that any number of gates can be linked with each having their own envelope shaping whilst the trigger pulse passes through unchanged, this opens up a whole world of “envelope follower” effects limited only by your imagination.

Setting up noise gates can be tedious and unrewarding. For example, when attempting to separate a signal from unwanted noise or crosstalk that is relatively high in level, spurious triggering of the gate by unwanted components within the sound can be a serious problem. This can often be experienced in the studio when recording a drum kit. If a gate is used to clean up the snare drum sound it is quite likely that the nearby hi-hats will spill into the snare drum microphone and cause the gate to open. Increasing the threshold level may cure this problem, but then there is a very real danger that any quieter snare drum beats may not cause the gate to open at all and the performance can easily be ruined.

The DRAWMER solution to this problem is the inclusion of two variable filters, one high-pass and one low-pass, which act upon the side-chain keying circuitry. By setting the output switch to key listen the user can hear the action of the filters and adjust them to reject high frequency spillage from the hi-hats. This now enables the gate to only open on the lower frequencies present in the snare drum.

The very fast attack of the DS101 means that it can open in a matter of micro seconds, thus preserving the natural attack of whatever sound is being gated and the comprehensive envelope controls mean that the gain can be changed at whatever rate best suits the material being processed. With vocals for example, a fairly fast attack is needed so as not to clip the leading consonants but a slower release time will prevent the end of words being clipped off and will also fade out any noise gradually rather than cutting it off abruptly. This latter point is very important as the human ear is far more sensitive to rapidly changing noise levels than to a constant low level noise.

Another important role played by the gate is in the reshaping of existing sounds. An example of this might involve a simple sampling delay line used to store a sound to be re-triggered later and added to a mix. A gate can be used to impart a slower attack or faster decay to the sound and careful setting of the decay envelope can effectively hide any noise present at the end of the sample. When using a sampler or drum machine the gate can be considered a triggered envelope shaper, and the wide range allowed by the envelope controls make the DS101 ideal for this application.

The unit can be switched to accept a key input, which allows the gate to be triggered externally. An example of this would be to use a snare drum signal to open the gate on a separate ambient microphone to create a natural alternative to gated reverb.

With a rack full of DS101's each can be individually switched from Gating to Ducking for 'voice over' applications or the removal of 'clicks' and 'pops'.

Please fill out the form below and a Vintage King Audio Consultant will contact you with a ship date for the Drawmer DS101 500 Series Noise Gate.

Have a better price in mind for the Drawmer DS101 500 Series Noise Gate that you've been checking out? We're willing to work on it!Please fill out the form below with your contact information.Once the form is submitted, a Vintage King Audio Consultant will contact you as soon as possible with our best price on this product.

VIEW
30515
I would like to thank VK for the wonderful sales assistance, service and prices. This was my first purchase with you and it won't be my last. I only wish I'd discovered you years ago!
Matthew R.
I had two Grammy wins this year - Ray LaMontagne & Carolina Chocolate Drops. Both made with help from Vintage King!
Ryan F.
In almost 20 years in Pro audio buying, never did I receive a unit so well packed and exactly as described. Works flawlessly. The whole process has been so smooth. I will never hesitate to do business with you guys in the future and will recommend you to everyone I know.
Martin C.
This was my first experience buying something from Vintage King (although I surf the "used" categories on the website frequently!), and, despite being on the other side of the world, I had absolutely no trouble and everything went very smoothly.
Phil T.
The speed of delivery exceeded my expectations! I was VERY pleased that my shipment arrived in time for a scheduled vocal tracking session. The packing insured that my order arrived safely. And the sales staff responded quickly to questions regarding the product.
James P.
Thank you so much! Vintage King has been so fair and easy to work with. I can't thank you enough. It feels good to trust such a hefty purchase to folks who are so helpful and knowledgeable. Vintage King is a sound designers dream store.
Noa L.
You guys have excellent customer service and I am excited about the next upgrade I complete on my fifth recording facility. I've been in the studio business for forty plus years. The salesman I worked with at Vintage King was the best of the best. You all rock!
Robby T.
I would recommend Vintage King to any one looking for top-class gear, unbeatable customer service and the best prices on the map!
Jake D.
My experience with Vintage King was excellent. The order was here fast considering it was out of stock. The sales person had SKB send it to me directly and I couldn't have been more pleased.
Michael D.
From the minute I placed my order I was kept well-informed through each step in your process. Even though I was buying a comparatively modest piece of gear, your attention to detail made me feel like I was purchasing a six-figure mixing desk.
Thomas W.
I am a new customer of yours. You guys provided me the absolute best deals in ordering all the equipment to power my brand new recording studio. Your customer service is amazing and i will always deal with you from here on out.
Rob M.
Thanks for your great service and getting this out today. You guys really are the Kings!
Alan B.
Better than expected! Truly impeccable service. Your team was professional, knowledgeable, provided speedy delivery above and beyond standard. Vintage King Audio is definitely my go to for all of my audio and information needs.
James O.