$ 395 .00
No interest if paid in full within 12 months Learn more
In Stock
Item is in stock and will ship the next business day. Place your order before 4:00pm ET Mon-Fri and we will ship your items the same day.

Stereo, multi-function digital reverb pedal capable of searing volume, gated walls of sound, and long, trailing reverberant ambiances with an intuitive array of controls
MFR# Rooms
Shop All Death By Audio
Skip to the end of the images gallery 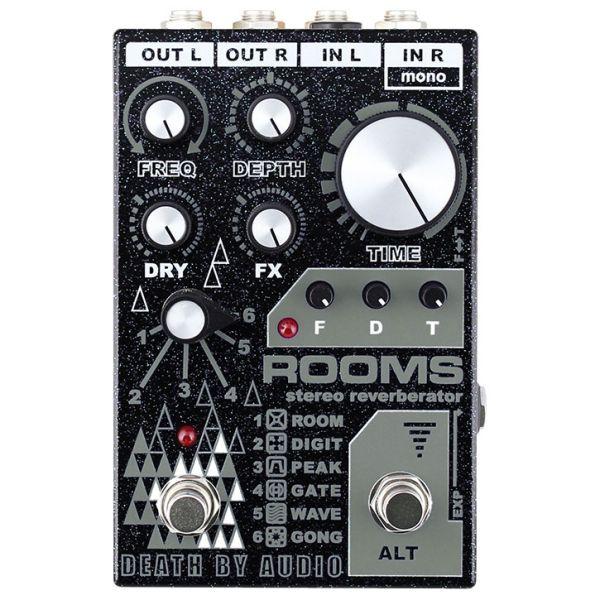 The Death by Audio ROOMS is a stereo, multi-function digital reverb pedal capable of searing volume, gated walls of sound, and long, trailing reverberant ambiances with an intuitive array of controls designed with real-time mood-bending in mind.

ROOMS was designed to the highest standards of flexibility and audio fidelity. A studio-quality mixer section provides independent DRY and FX controls over six meticulously programmed reverb algorithms; ROOM, DIGIT, PEAK, GATE, WAVE, and GONG. Each different verb is capable of a universe of sounds, and to help you explore them all, DBA included the ALT mode.

The ALT footswitch switches between two sets of controls, the second of which can be controlled by an expression pedal. This setup allows for fantastic live interaction with your ROOMS, letting you switch musically between wildly different spaces and turn your expression pedal on and off.

ROOMS’ clever I/O switching also allows for a variety of routing possibilities, including stereo L/R, mono to stereo L/R, and mono in with separate dry and wet outputs, making ROOMS perfect for studio exploration as well as live performance on the road.

Please fill out the form below and a Vintage King Audio Consultant will contact you with a ship date for the Death by Audio ROOMS Stereo Reverberator Pedal.

Have a better price in mind for the Death by Audio ROOMS Stereo Reverberator Pedal that you've been checking out? We're willing to work on it!Please fill out the form below with your contact information.Once the form is submitted, a Vintage King Audio Consultant will contact you as soon as possible with our best price on this product.