$ 1,699 .00
No interest if paid in full within 12 months Learn more
Ships directly from Crane Song
Note: This item may not be returnable or could require a restocking fee. Contact one of our Audio Consultants for more details. This item ships directly to you from the manufacturer. To ensure that the manufacturer currently has stock, please chat, call or email for the latest availability status.

1U microphone preamp with 3 color controls: speed, gain and harmonic
MFR# EUROPA 1U
Shop All Crane Song
Skip to the end of the images gallery 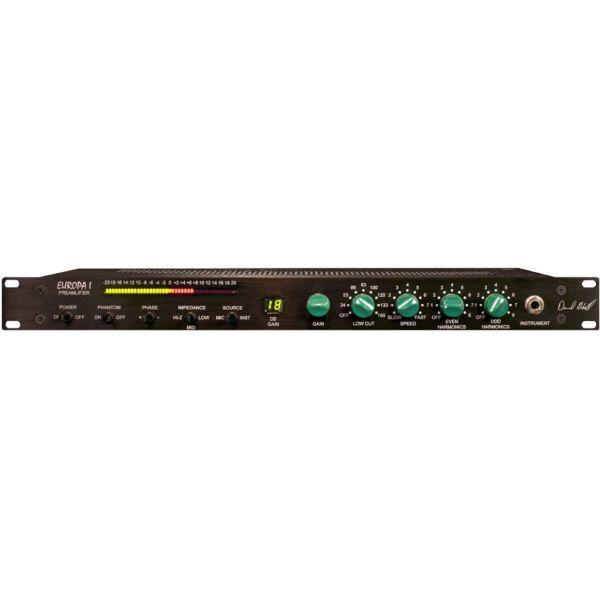 The Crane Song Europa Mic Pre is a totally unique design concept in microphone preamplifier technology. After years of design to prototype to production, Crane Song feel the recording industry is ready to experience the feature-packed Europa One!

Included are the standard functions such as phase, phantom power, and instrument input. The microphone input has 3 input impedance choices which are 2.2K ohms for normal microphone operation, 300 ohms and a Hi-Z choice for different microphone sounds. The instrument input has an impedance of 1.2 Megohms which is ideal for guitars. The gain overall is adjustable in 1db steps from 0 to 66db on the mic input and 0 to 30 dB on the instrument input. Gain is displayed on a 2 digit led display. The low cut filter which is a 3 pole, 18db per octave has 8 frequencies 148 Hz, 130 Hz, 117 Hz, 100 Hz, 81 Hz, 63 Hz, 48 Hz, 33 Hz, and off.

All the controls; gain, speed, even harmonic, the odd harmonic controls are stepped which makes it easy to recall settings.

The maximum output level is +24 dBu balanced with the maximum balanced input level of +24 dBu at 0 dB of gain. This allows the Europa 1 pre-amp to be used in a mix environment for coloring.

Please fill out the form below and a Vintage King Audio Consultant will contact you with a ship date for the Crane Song Europa Microphone Preamp.

Have a better price in mind for the Crane Song Europa Microphone Preamp that you've been checking out? We're willing to work on it!Please fill out the form below with your contact information.Once the form is submitted, a Vintage King Audio Consultant will contact you as soon as possible with our best price on this product.