$ 1,598 .00
No interest if paid in full within 12 months Learn more
Special Order
Note: This item may not be returnable or could require a restocking fee. Contact one of our Audio Consultants for more details. Due to the special nature of this item, we order each unit fresh from the factory, exclusively for you! Lead times may vary so please chat, call or email for up-to-date inventory status. 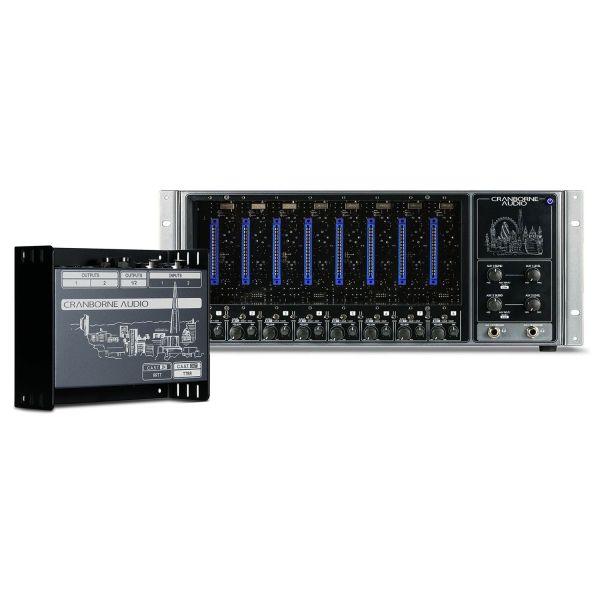 The Cranborne Audio 500ADAT is the perfect tool to increase the I/O count of any ADAT-equipped audio interface.

It's an 8-in/8-out ADAT expander that combines a 500 series rack with high-performance AD/DA conversion and ADAT I/O that allows any engineer to integrate the 500 series format into their studio using free ADAT I/O on the back of many popular audio interfaces.

500ADAT features analog essentials that unite digital and analog production workflows such as an 8-into-2 analog summing mixer, zero-latency artist mixer with 2 reference-quality headphone outputs, and true ADAT & SMUXII/IV transmission to enable operation at sample rates up to 192 kHz

THE BEST OF ANALOG CHARACTER

By capitalizing on the vast and ever-growing 500 series market, you can configure your 500ADAT to suit your tastes of analog flavor. By installing your favorite 500 series modules into the 8 available 500 series slots, you can create your ultimate analog front-end/preamp stage that can be multi-track recorded directly into your DAW.

For a more hands-on, all-analog approach to mixing, 500ADAT also features an 8-into-2 high-headroom analog summing mixer with dedicated level and pan controls that you can use to create your own high-headroom analog mix before recording it back into your DAW using the dedicated 1/4” mix output jacks on the rear panel.

In order to capture every subtle nuance of your analog signal, 500ADAT features reference-class AD/DA conversion with 121dB (A-wtd) dynamic range and THD+N of <0.00032% (@ -4dBFS, 1kHz, A-wtd), all governed by 500ADAT’s master-reference grade internal clock with <0.5 picoseconds of jitter. You can also slave your audio interface’s clock from 500ADAT’s internal clock to benefit from 500ADAT’s low-jitter design.

The combination of highly accurate, low-jitter clocking and high-performance digital conversion ensures that every ounce of analog character is captured with the utmost detail - free of unwanted digital artifacts from the conversion process and with a wide dynamic range thanks to 500ADAT's high-headroom analog design and low noise floor.

ADAT is tried, tested, and still one of the most widely available interfacing protocols in the audio industry, however it often remains unused and under-utilized by many audio engineers and producers. Almost all major audio interfaces on the market feature a pair of ADAT lightpipe ports - simply connect 500ADAT to those ports and you can enhance and expand the possibilities of your studio.

By containing its own converters and using ADAT to transport audio to and from the 500 series format, 500ADAT removes analog cabling spaghetti between your rack and interface while eliminating the worry of mismatched analog operating levels between interface inputs and 500 series module outputs. 500ADAT is compatible with any session running from 44.1 kHz to 192 kHz and can achieve 8 channels of I/O expansion at 44.1 kHz to 96 kHz or 4 channels of I/O expansion at 176.4/192 kHz.

analog summing can give your mix the final bit of analog character required to achieve professional and polished sonic results. What makes 500ADAT's 8-into-2 channel summing mixer so special is that it is positioned after the 8 500 series slots - allowing you to insert saturation or subtle 'bus-compression' modules and create a stereo mix using 500ADAT’s dedicated analog level and pan controls beneath each module. 500ADAT's summing mixer also has a dedicated line output which can be used to send your stereo mix into your audio interface for recording.

500ADAT moves away from clunky "virtual" software mixers and gets your hands back onto the mix. By using 500R8’s high-headroom analog summing mixer, you can create zero-latency, all-analog mixes of live sources that can be blended with the Aux Input and sent directly to the recording musicians via C.A.S.T. or the local headphone outputs.

500ADAT has 4 C.A.S.T. IN ports that allow you to connect C.A.S.T. enabled breakout boxes (such as the Cranborne Audio N22 and N22H) to 500ADAT and relocate analog I/O wherever it is needed around the studio.

Connect mic/line sources into the C.A.S.T. breakout box and that signal travels through the Cat 5 cable and directly into the modules installed into 500ADAT. At the same time, the analog mix created on 500ADAT is sent through the same cable and into the connected breakout box. This allows for seamless analog audio connectivity between the control room, live room, vocal booth, or the bedroom next door!

C.A.S.T. is 100% analog and requires no setup in order to operate. It can easily work at distances up to 100m when Cat 6e or Cat 7 cable is used and a complete cat 5 studio cabling infrastructure costs a fraction of what analog multicore would cost. No setup. No latency. No fuss. And it sounds great.

DESIGNED AND ENGINEERED IN THE UK

To ensure that every product bearing the Cranborne Audio name is worthy of studio environments big or small, every 500ADAT is carefully assembled by a skilled workforce with immense attention to detail and every product is tested thoroughly by a skilled engineer before shipping to destinations around the world.

From now through December 31, 2021 receive a free Cranborne Audio N22 Standalone Cat 5 Snake/CAST Breakout Box (a $99 value!) when you purchase an EC2 Preamp. The N22 is a standalone 4 channel cat 5 snake and advanced audio distribution system via C.A.S.T. Put simply, N22 replaces 4 balanced XLR cables with 1 Cat 5 cable over distances of up to 10 0m. Featuring the Cranborne C.A.S.T. system, N22 distributes audio around studios or stages using affordable cabling by repurposing the internal copper wires of a Cat 5 cable to transport balanced analog audio to and from other C.A.S.T. enabled products - such as another N22.

Studios already built around a Cranborne Audio interface can simply connect N22’s into their C.A.S.T. Input connectors and then audio plugged into N22's input will appear directly at interface's inputs ready recording. That same cat 5 C.A.S.T. connection also transmits a stereo monitor mix generated by the interface directly into N22’s balanced XLR and 1/4” Jack outputs for monitoring or reamping.

Connect N22 into 500R8's or 500ADAT's C.A.S.T. Input connectors and then mic/line sources connected to N22’s inputs are sent directly to the interface's inputs ready for recording via C.A.S.T. Meanwhile, a stereo monitor mix generated by 500R8/500ADAT is carried down the same C.A.S.T. connection and directly into N22’s dual ¼” jack and XLR line outputs.

Replace cumbersome and expensive analog multicore systems by using two N22's to send and receive balanced analog audio between two locations. Connect N22 with your current audio interface and distribute audio into the vocal booth, into the live room, or temporarily into the hallway using a single Cat 5 cable.

Please fill out the form below and a Vintage King Audio Consultant will contact you with a ship date for the Cranborne Audio 500ADAT 500 Series Rack/ADAT Expander with Free N22.

Have a better price in mind for the Cranborne Audio 500ADAT 500 Series Rack/ADAT Expander with Free N22 that you've been checking out? We're willing to work on it!Please fill out the form below with your contact information.Once the form is submitted, a Vintage King Audio Consultant will contact you as soon as possible with our best price on this product.