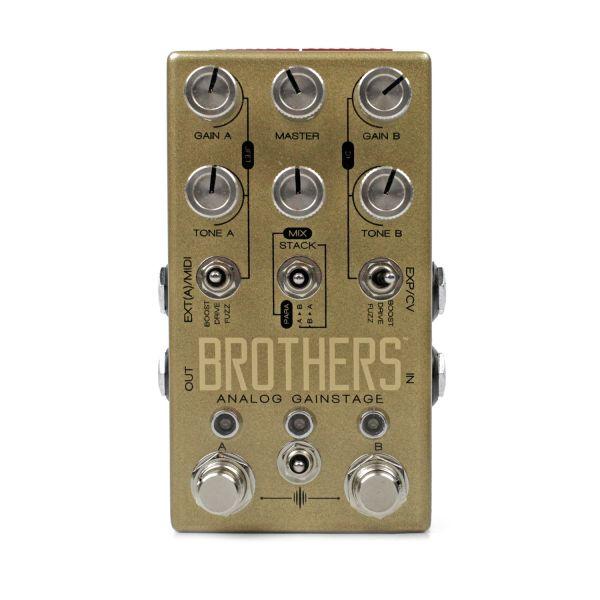 The Chase Bliss Brothers Audio Analog Gainstage has two channels that each feature an overdrive and fuzz. Channel A has a JFET-based boost, and Channel B an IC-based boost. Both channels have a momentary engage/kill mode. From its six unique boost, drive, or fuzz circuits, the pedal can be routed in 33 distinct patterns, including mixing channels in parallel or changing the order of the effects.

As with every Chase Bliss pedal, you can save everything and recall presets instantly as you play, either on the pedal or with MIDI. Every knob and switch is connected to a little digital brain while your guitar signal stays 100% analog the entire time and never gets digitally processed.

The Chase Bliss Brothers was created out of the mutual respect between designers Joel Korte of Chase Bliss and Peter Bregman of Resonant Electronic Design. Peter was inspired to expand the reach and possibilities of circuits he’d designed for his various analog pedals by combining them into one digitally controlled pedal. As a fan of Chase Bliss for their passionate approach to parameter controllability, modulation, and spontaneous automation, he recognized Joel as one to help him realize his idea and make it even better than he imagined.

Joel agreed to the project when he took apart one of Peter’s pedals to look at the circuit design and loved what he saw. He embraced the fresh design challenge of truly complementing Peter’s original analog work and having it shine through in the pedal’s personality, making it a rule to add no extraneous effects just for their own sake.

Chase Bliss gear is created especially for tone-crazed players that desire a certain analog something in their tone while demanding the ability to tweak everything and recall settings at will.

I'll admit, I was skeptical about the announcement of this pedal. How many more drive pedals do we need?! A buddy of mine had gotten one first and was telling me how original it was. Nothing like other drives that were out there currently. He wasn't kidding. Channel A is a bit more saturated with a tight, percussive attack, while Channel B has a bit more sag, smoothness and transparency going on. I don't mean that as a buzzword either. You clean signal is always blended in underneath the dirty signal. This is especially awesome for bass. Amazing, swiss army knife of a pedal!

Please fill out the form below and a Vintage King Audio Consultant will contact you with a ship date for the Chase Bliss Brothers Audio Analog Gainstage.

Have a better price in mind for the Chase Bliss Brothers Audio Analog Gainstage that you've been checking out? We're willing to work on it!Please fill out the form below with your contact information.Once the form is submitted, a Vintage King Audio Consultant will contact you as soon as possible with our best price on this product.

VIEW
74625
I would like to thank VK for the wonderful sales assistance, service and prices. This was my first purchase with you and it won't be my last. I only wish I'd discovered you years ago!
Matthew R.
I had two Grammy wins this year - Ray LaMontagne & Carolina Chocolate Drops. Both made with help from Vintage King!
Ryan F.
In almost 20 years in Pro audio buying, never did I receive a unit so well packed and exactly as described. Works flawlessly. The whole process has been so smooth. I will never hesitate to do business with you guys in the future and will recommend you to everyone I know.
Martin C.
This was my first experience buying something from Vintage King (although I surf the "used" categories on the website frequently!), and, despite being on the other side of the world, I had absolutely no trouble and everything went very smoothly.
Phil T.
The speed of delivery exceeded my expectations! I was VERY pleased that my shipment arrived in time for a scheduled vocal tracking session. The packing insured that my order arrived safely. And the sales staff responded quickly to questions regarding the product.
James P.
Thank you so much! Vintage King has been so fair and easy to work with. I can't thank you enough. It feels good to trust such a hefty purchase to folks who are so helpful and knowledgeable. Vintage King is a sound designers dream store.
Noa L.
You guys have excellent customer service and I am excited about the next upgrade I complete on my fifth recording facility. I've been in the studio business for forty plus years. The salesman I worked with at Vintage King was the best of the best. You all rock!
Robby T.
I would recommend Vintage King to any one looking for top-class gear, unbeatable customer service and the best prices on the map!
Jake D.
My experience with Vintage King was excellent. The order was here fast considering it was out of stock. The sales person had SKB send it to me directly and I couldn't have been more pleased.
Michael D.
From the minute I placed my order I was kept well-informed through each step in your process. Even though I was buying a comparatively modest piece of gear, your attention to detail made me feel like I was purchasing a six-figure mixing desk.
Thomas W.
I am a new customer of yours. You guys provided me the absolute best deals in ordering all the equipment to power my brand new recording studio. Your customer service is amazing and i will always deal with you from here on out.
Rob M.
Thanks for your great service and getting this out today. You guys really are the Kings!
Alan B.
Better than expected! Truly impeccable service. Your team was professional, knowledgeable, provided speedy delivery above and beyond standard. Vintage King Audio is definitely my go to for all of my audio and information needs.
James O.