$ 699 .00
Your Savings: $ 500 .00 Msrp: $ 1,199 .00
No interest if paid in full within 18 months Learn more
Special Order
Note: This item may not be returnable or could require a restocking fee. Contact one of our Audio Consultants for more details. Due to the special nature of this item, we order each unit fresh from the factory, exclusively for you! Lead times may vary so please chat, call or email for up-to-date inventory status. 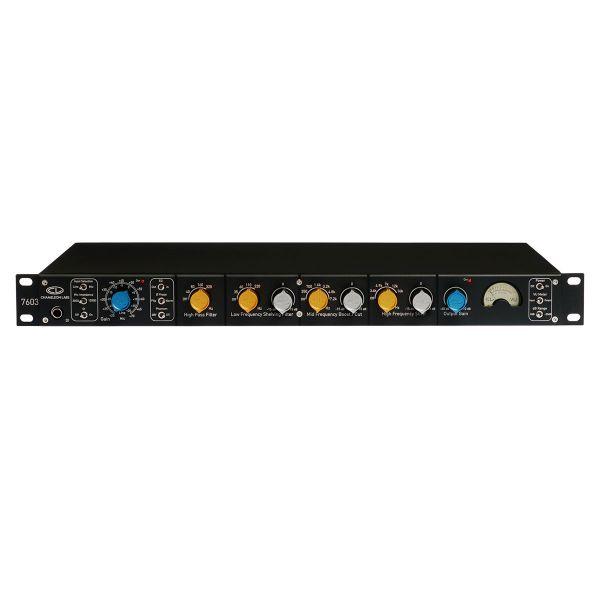 The Chameleon Labs 7603 is Chameleon’s flagship pre-amplifier, representing a leap forward in analog design, performance, versatility and value. Its fundamental design architecture retraces the path of revered, classic pre-amps of the past as well as the popular 7602. Chameleon's engineers at Chameleon have worked tirelessly in developing new, pivotal components that allow us to take the next step forward in performance.

Design of the new transformers was based around the need to capture and preserve the delicate audio input signals’ truest form, and so they are enclosed in high permeability MuMetal enclosures, designed to protect sensitive audio signals from radio frequencies, spurious and parasitic noises.

Once your audio exits the input transformer, circuit boards are carefully crafted to ensure the highest possible signal integrity. As a starting point, Chameleon developed a new discrete audio input gain stage based on the vision for a solid topology that provides extremely low noise, high dynamics and extreme bandwidth. All of the 7603’s operational amplifiers used throughout the device are based on this topology.

The 7603 features EQ stages with four different available adjustments—Variable High Pass, Low Frequency Shelving, Mid Frequency and High Frequency Shelving. Chameleon's engineers made a conscious decision to stay with the same, desirable, inductor-based topology that made the 7602 so popular, however they implemented the new discrete Op Amp to drive signal through a new set of custom Chameleon designed and manufactured inductors, providing the musicality we all love to use.

The output stage of the 7603 is unique with respect to its design and performance. It can be described as a variable-gain circuit that simultaneously adjusts both the input and output levels in order to generate a lower noise floor and extraordinary audio performance.

The 7603 pre-amplifier provides a desirable set of user selectable functions designed to make the unit flexible and an integral part of the artistic process, incorporating a full portfolio of traditional features as well as some not commonly seen on other pre-amps.

Chameleon have added a low impedance Direct Input on the front panel for plugging in instruments such as guitars that can be run through the line input stage, and added a precision VU meter with custom ballistics for visual monitoring of either the input or output levels.

Please fill out the form below and a Vintage King Audio Consultant will contact you with a ship date for the Chameleon Labs 7603 Mic Preamp.

Have a better price in mind for the Chameleon Labs 7603 Mic Preamp that you've been checking out? We're willing to work on it!Please fill out the form below with your contact information.Once the form is submitted, a Vintage King Audio Consultant will contact you as soon as possible with our best price on this product.