$ 8,278 .00
No interest if paid in full within 12 months Learn more
Ships directly from CEDAR Audio
Note: This item may not be returnable or could require a restocking fee. Contact one of our Audio Consultants for more details. This item ships directly to you from the manufacturer. To ensure that the manufacturer currently has stock, please chat, call or email for the latest availability status. 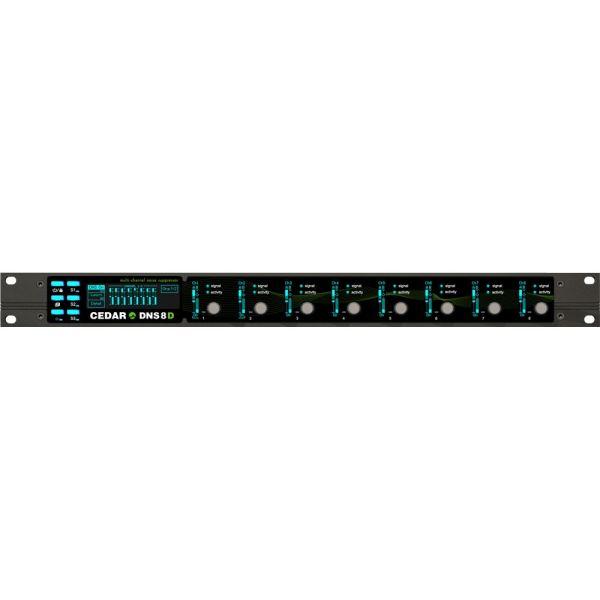 The Cedar DNS 8 D Dialogue Noise Suppressor has been designed specifically for broadcast and live sound. With eight channels of noise suppression, it hosts a new algorithm that marries the best of the machine learning and signal processing on which the DNS 8 Live and the DNS 2 dialogue noise suppressors are based. With its slick user-interface that includes standard and detailed modes of operation it offers better control than any previous dialogue noise suppressor, both from the front panel and from almost any web browser that can access its internal remote control software. With its near-zero latency and standard 4-pin 12 VDC input in addition to universal mains power, it's suitable for use in all live situations - not just broadcasting, but also live sound in venues such as theaters, concert halls, conferences venues, and places of worship.

CEDAR's Dialogue Noise Suppression technology is the standard for removing background noise from dialogue in studios. With near-zero latency, high-resolution processing, and a fast, intuitive user interface, it eliminates traffic noise, air conditioning, wind, rain, babble and general background noise from audio signals. It will also help to compensate for unfavorable acoustic conditions and poor microphone placement, and will even suppress excessive reverberation.

Dante is the de-facto standard for media networking, distributing uncompressed, multi-channel digital audio via standard Ethernet networks with near-zero latency and perfect synchronization. The DNS 8D is the first DNS with a Dante interface in addition to its AES3 audio connections (DB25 using the AES59 pin-out). With fail-safe AES3 audio bypass implemented in the form of hardware relays that immediately connect the inputs to the outputs in the event of a power failure or other significant disruption plus support for Dante's redundant mode of operation which helps to protect against network failure, it can be installed with confidence in critical paths anywhere within the audio chain.

Cedar supply an optional high-quality AES3 breakout cable for the DNS 8D, offering a DB25 connector at one end and 4 x XLR (female) plus 4 x XLR (male) at the other. This allows users to connect the DNS 8D to equipment using the traditional XLR format.

Please fill out the form below and a Vintage King Audio Consultant will contact you with a ship date for the Cedar DNS 8 D Dialogue Noise Suppressor.

Have a better price in mind for the Cedar DNS 8 D Dialogue Noise Suppressor that you've been checking out? We're willing to work on it!Please fill out the form below with your contact information.Once the form is submitted, a Vintage King Audio Consultant will contact you as soon as possible with our best price on this product.