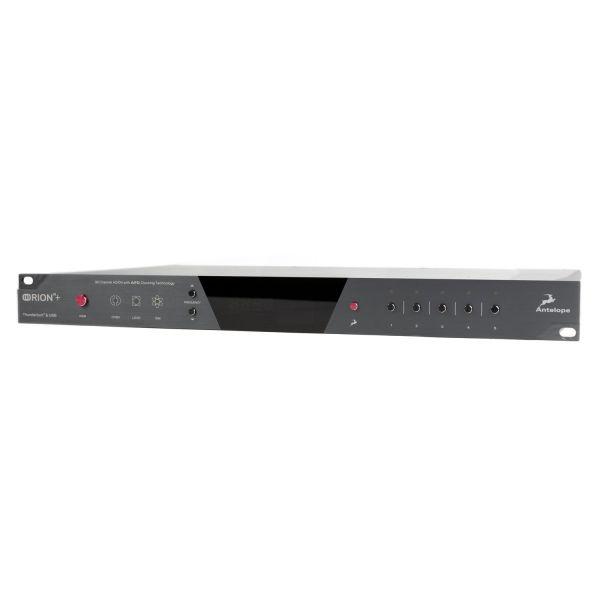 The latest version of the Orion 32+ Thunderbolt/USB audio interface, the Antelope Orion 32+ Gen 3, picks up where the Orion 32+ left, providing the same outstanding digital and analog I/O but with a substantially improved conversion quality previously only available in the Orion 32 HD! The D/A converters now provide a dynamic range of 120 dB (up from 118 dB on the original Orion 32+), while the D/A converters provide 121 dB dynamic range (up for 118 dB on the oringal). Additionally, the line input/outputs now provide +24 dBU gain (increased from 20 dB).

CONNECT ORION 32+ TO ANY DAW ON THE MARKET

Orion 32+ provides seamless connectivity to any DAW, allowing for low latency simultaneous I/O streaming of 64 channels of 24-bit, 192 kHz audio signal via ThunderboltTM and 32 channels via USB. The analog I/O are handled by 8 DB25 connectors and a pair of TRS connectors for monitoring.

Orion 32+ offers stunning flexibility and great productivity, providing a color-coded routing matrix with four separate mixers, built-in DSP effects and zero latency monitoring. The entire control is gathered in a desktop application available for both OS X and Windows. The control panel is based on the software created initially for Orion 32 and further developed for another Antelope Audio leading product, Zen Studio. Orion 32+ control panel is an extremely intuitive user-friendly interface, which incorporates both our know-how and customers’ feedback.

The proven clocking accuracy is supported by Antelope’s renowned 64-bit Acoustically Focused Clocking (AFC) jitter management technology, the same as with the flagship Trinity Master Clock. The clean, transparent and detailed conversion in Orion 32+ is the same as with its predecessor, which has proved its sound quality in a great number of studios and live shows across the Globe. The 10 MHz input, enabling connectivity to Antelope’s legendary 10M Atomic Clock and its successor 10MX, makes Orion 32+ crystal oscillator remarkably precise, emphasizing the signature Antelope sound. The two word clock outputs make Orion 32+ a great fit in any setup, not only as an interface, but a master clock as well.

Control all Orion 32+ features and functions from its freshly redesigned desktop app. OS X and Windows compatible, the control panel follows Antelope Audio’s networking control concept, meaning you can now access the interface from multiple computers in the same network. The Orion 32+ software panel allows users to detach all its sections into freely movable and resizable panels for more convenient session arrangements, especially important for engineers and artists with multiple screen setups.

Have a better price in mind for the Antelope Audio Orion 32+ Gen 3 #1610721000129 (Used) that you've been checking out? We're willing to work on it!Please fill out the form below with your contact information.Once the form is submitted, a Vintage King Audio Consultant will contact you as soon as possible with our best price on this product.