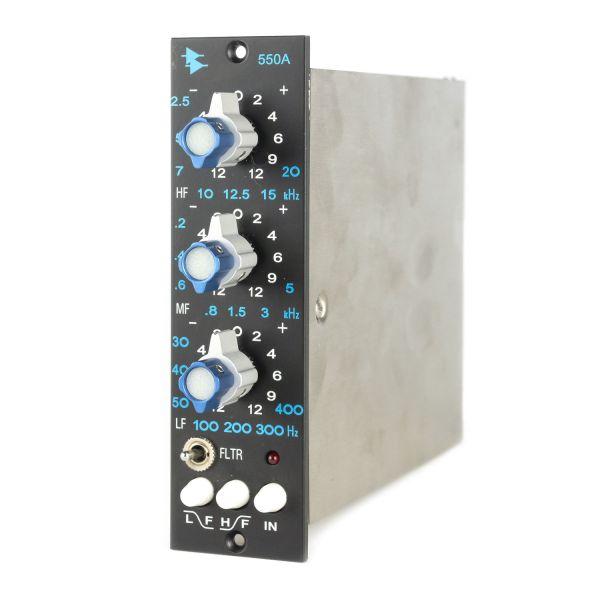 Few equalizers enjoy the respect and admiration of the coveted API 550A. Designed by the now-legendary Saul Walker in the late '60s, the discrete 550A was first used as a modular OEM equalizer. As the industry rapidly embraced the sonic quality of the 550A, it quickly found its way into many custom console designs by Frank DeMedio and other leading engineers. Many of these consoles are still in use today.
Forty years later, the 550A remains the standard against which other EQ s are measured, and it has played a major role in the recording industry for decades. Still copied but never duplicated, the 550A became API's standard channel module EQ when the company began manufacturing consoles in 1971. With virtually all existing units spoken for, popular demand for this EQ resulted in API finally resuming production in 2004.
The 550A provides reciprocal equalization at 21 points in 7 steps of boost to a maximum of 12dB of gain at each point. The fifteen equalization points are divided into three overlapping ranges. The high and low frequency ranges are individually selectable as either peaking or shelving, and a band-pass filter may be inserted independently of all other selected equalization settings. Frequency ranges and boost/cut are selected by three dual-concentric switches, and a pushbutton "in" switch allows the EQ to be silently introduced to the signal path. A small toggle switch is used to insert the band-pass filter into the 550A.
The combination of Walker's incomparable 2520 op amp and his "Proportional Q" circuitry gives the 550A user an uncomplicated way to generate acoustically superior equalization.
With the long-awaited reissue of this unit, an EQ that has had such a part in the history of recording is continuing to make history in today's music.
Features

Please fill out the form below and a Vintage King Audio Consultant will contact you with a ship date for the API 550A Equalizer Reissue #8891-19 (Used).

Have a better price in mind for the API 550A Equalizer Reissue #8891-19 (Used) that you've been checking out? We're willing to work on it!Please fill out the form below with your contact information.Once the form is submitted, a Vintage King Audio Consultant will contact you as soon as possible with our best price on this product.