$ 3,295 .00
No interest if paid in full within 18 months Learn more
Ships within 2 business days
Feel confident in your purchase with VK's industry leading warranty on used and vintage items. "VK Certified" means that your gear has gone through our rigorous multi-point inspection, servicing, and quality control process to ensure that it looks and sounds as close to factory new as possible. 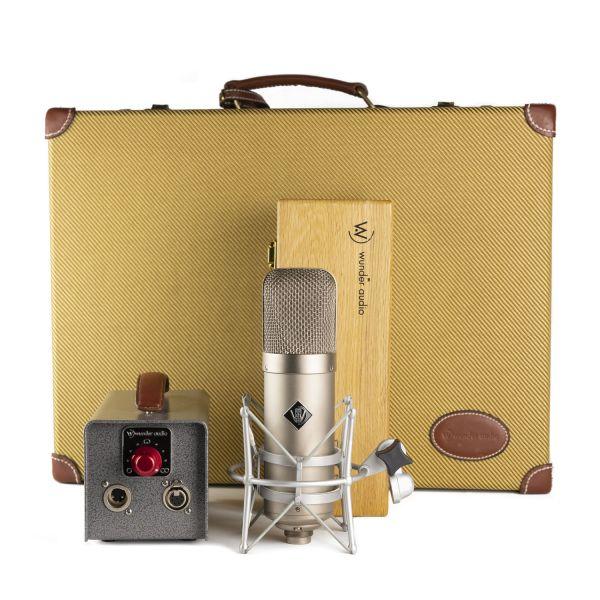 There's nothing arbitrary about the "67" moniker here. Rather, the CM67 from Wunder Audio is a meticulous modern re-creation of one of music's most sought-after mics. The elegance here is in the simplicity, just like the original. Built around the K67 capsule and a vintage Telefunken EF86 tube, the CM67 uses a specially selected and specially wound transformer to achieve the high-frequency response of the original, without compromise. Just as you'd expect, the CM67 is a stallion on vocals thanks to its inherent smoothness and warmth. Yet, it's also your close-miking workhorse, perfectly suited to drums (kick, snare, overheads, room) and guitar-amp miking. A respectful nod to history.

Modern design that's true to the original's intent
When Wunder Audio set out to craft the CM67, they had one goal in mind: stay honest to the elegant simplicity that defined the original. To achieve the feat, Wunder Audio employed a K67 capsule and a vintage EF86 tube pentode wired into the circuit as a triode. They also spent considerable time making the transformer right. As the K67 capsule has a natural HF peak through its design, the transformer needed to naturally roll off the HF to compensate, just like the original. While some of today's re-creations take a quick-fix approach to the problem, Wunder Audio went above and beyond with a specially selected and wound transformer that makes use of an elaborate feedback network called tertiary winding. The result is negative feedback creation through the capsule to the tube, resulting in HF de-emphasis. It's a natural-sounding solution with impressive results.

Warm and smooth close-miking workhorse
Use the Wunder Audio CM67 everywhere a "67" belongs. It's an all-around gorgeous large-diaphragm tube condenser. Vocals are a natural choice, and the CM67 retains every bit of the smoothness and warmth you'd expect, making it ideal for everything from subtle crooning to more aggressive vocals. Still, the CM67 is a rock-solid performer for any close-miking application. It loves overheads and anything drums and delivers a huge guitar sound as well. An all-around contender.

Nine polar patterns add flexibility
Whereas the original offered three patterns, the CM67 triples the miking flexibility offering nine polar patterns. Unlike the original, which was switchable via a rotary switch beneath the capsule, the CM67 adds convenience by placing a 9-way control on the power supply that communicates with a solid-state relay within the grille housing. Choose among, omni, wide cardioid, cardioid, hypercardioid, and figure-8 with intermediate steps in between.

Crafted with the benefit of today's PSU technology
The Wunder Audio CM67 features the power supply the original wishes it had, taking advantage of the best of today's power supply technology. The team landed on a high-voltage path that runs a constant current and balances constant current against a shunt regulator. The result is pristine voltage and RF-free performance.

Please fill out the form below and a Vintage King Audio Consultant will contact you with a ship date for the Wunder Audio CM67 #232 (Used).

Have a better price in mind for the Wunder Audio CM67 #232 (Used) that you've been checking out? We're willing to work on it!Please fill out the form below with your contact information.Once the form is submitted, a Vintage King Audio Consultant will contact you as soon as possible with our best price on this product.