$ 21,995 .00
or $493/month for 60 months Based on 60 monthly payments of $493 on approved credit (OAC). Learn more about leasing
Ships within 2 business days
Feel confident in your purchase with VK's industry leading warranty on used and vintage items. "VK Certified" means that your gear has gone through our rigorous multi-point inspection, servicing, and quality control process to ensure that it looks and sounds as close to factory new as possible. 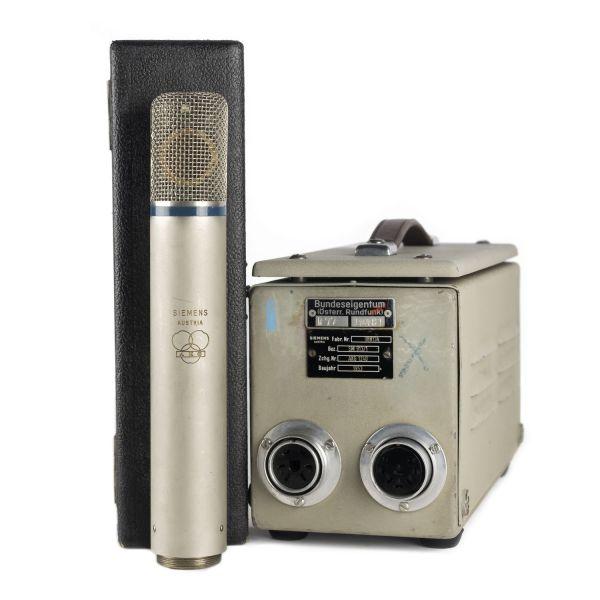 The AKG C12 is a justifiable legend in the world of microphones. Now enshrined in the Technology Hall of Fame, it has spawned a number of imitators and vintage re-issues. The originals were only made for ten years, (1953-1963), with approximately 2,500 microphones manufactured.

Known for its unparalleled clarity and unique sound, with rich low end and natural top end, the combination of the CK12 capsule and the 6072 tube achieves what many consider the pinnacle of the microphone designer's art. The rarity of the mic, combined with the outstanding tone, and a frequency range from 20 kHz all the way down to 20 Hz, has made it one of the two or three 'Holy Grail' large diaphragm condensers.

But there is no single version of the C12. There were actually two different CK 12 capsules used in the mic, a large-cavity and a small-cavity version, as well as different thicknesses of diaphragm material. The transformers also went through different versions, from the Hiller T14 to the Henry 2148 to the famous Haufe T14/1. All of these variations combine to make the C12 a microphone that truly evolved over time.

Coming hard on the heels of the Neumann M49, it was the second LDC mic that had a remote-controlled multi-pattern capability. A separate box allows switching the mic between any of nine different patterns, from omni through cardioid to figure-of-eight. This was very helpful for installations, such as a concert hall, where one did not want to have to move the microphone to change the polar pattern (especially after carefully finding the perfect "sweet spot" to record from).

The C12 is not only a fantastic mic in its own right, but has also spawned the whole series of AKG mics from the C12A to the 414 series of today. And when Neumann stopped working with Telefunken, they came calling to AKG, who made a variation of the C12 for them called the Ela-M 251. A case of one Holy Grail microphone giving birth to another.

The C12 was frequently used for recording Paul McCartney's bass on Beatles tracks from Sgt. Pepper onwards, and also saw use recording the grand piano, strings, and the famous orchestral section of A Day in the Life.

The great versatility of the C12 was proven in the sessions produced by Quincy Jones for "We Are The World". With a dazzling array of the best singers in the business, Quincy tried several mics before choosig the AKG C12 as the one mic that could do justice to ALL of their voices. The result was one of the most famous collaborations ever recorded with multiple singers - all of them using the equally famous C12.

Please fill out the form below and a Vintage King Audio Consultant will contact you with a ship date for the AKG C12 Multi-Pattern Tube Microphone #127 (Vintage).

Have a better price in mind for the AKG C12 Multi-Pattern Tube Microphone #127 (Vintage) that you've been checking out? We're willing to work on it!Please fill out the form below with your contact information.Once the form is submitted, a Vintage King Audio Consultant will contact you as soon as possible with our best price on this product.