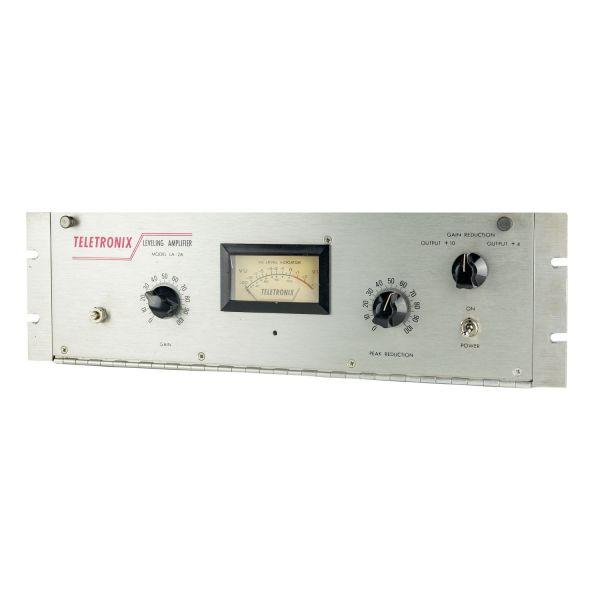 The Teletronix LA-2A Leveling Amplifier has a long history stretching back over half a century. During that time the company changed hands and the model went through a variety of incarnations. Despite these several changes, the LA-2A has remained one of the most popular tools in the recording studio, beloved by engineers for its program-dependent compression and ease of use. Beautiful for vocals, bass, guitars, overheads, drums, etc.Essentially there are six different versions of the LA-2A, based on various design elements, parts, outward appearance, and parent companies. The six revisions can best be classified as: Revision 1 (the original); Revisions 2A, 2B and 2C (all inter-related in various ways); Reissue 1 and Reissue 2. The first four versions kept consecutive serial numbers, while the two reissues had their own numbering scheme.The final, seventh version, appeared when Universal Audio was resurrected by Bill Putnam Jr., and the LA-2A made its modern reappearance in the line of "UA Classics".Briefly the differences are most easily classified by company ownership:This unit is a limited edition silver face version dubbed Reissue 1, with the following features:
SALES DESCRIPTIONFree 1-year warranty included with your used purchase. Serviced by experts. Satisfaction guaranteed.

Please fill out the form below and a Vintage King Audio Consultant will contact you with a ship date for the Teletronix LA-2A Reissue 1 - UREI #184 (Vintage).

Have a better price in mind for the Teletronix LA-2A Reissue 1 - UREI #184 (Vintage) that you've been checking out? We're willing to work on it!Please fill out the form below with your contact information.Once the form is submitted, a Vintage King Audio Consultant will contact you as soon as possible with our best price on this product.