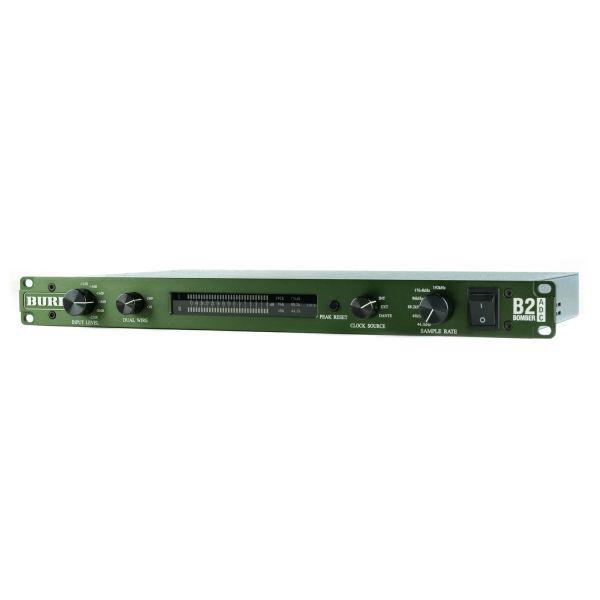 The Burl B2 Bomber ADC is the most significant piece of audio gear in your studio, and you dont even own it yet. Youve spent a fortune on great mics, great mic pres, and a kick ass DAW, but unfortunately you are missing one key component; an ADC with an audio path worthy of your recordings.
Open up your best Mic Pre and look inside. You will see high quality components like tubes, large transformers and high quality capacitors. Open up your ADC and you will find cheap 10 cent capacitors and run-of-the-mill 25 cent op-amps, even when youve spent a lot of money on your interface. Most DAW hardware interfaces are designed for inter-connectivity with little attention to the analog audio path, or even the conversion, let alone the tone.
The B2 Bomber is designed for great specifications, but more importantly, it is designed to give you the ultimate in recording tone. For years now people have been trying to figure out why their digital recordings dont have the warmth and feel of analog tape recordings. We try using tube mic pres and great compressors, but there is still something missing. There is still that blurriness, that graininess and lack of depth that comes with digital recordings.
BURL Audio has solved this problem by designing an analog audio path that is complimentary to your Mic Pre and to the analog to digital process. By using a revolutionary hybrid circuit with a proprietary transformer, the BURL AUDIO BX1, and a discrete class-A, zero feedback, zero capacitor signal path, we have achieved dynamic and tonal balance.
Using a B2 Bomber in the studio is like taking the governor off of your recordings. And, the B2 is not just for tracking. Mix down and mastering were the main focus of the B2's layout and design. With 30 segment peak amplitude and RMS metering, the B2 lets you know exactly how hot you are running your signal which is critical for mastering. The attenuator settings on the front easily allow you to change input headroom giving you the ability to hit the front end hotter or colder depending on what the material calls for. And dont be afraid to run the B2 Bomber hot, it only sounds better. Couple that with an extremely low jitter clock source, and you have the B2 Bomber ADC, the most significant piece of gear in your studio.

Please fill out the form below and a Vintage King Audio Consultant will contact you with a ship date for the Burl Audio B2 Bomber ADC #1443 (Used).

Have a better price in mind for the Burl Audio B2 Bomber ADC #1443 (Used) that you've been checking out? We're willing to work on it!Please fill out the form below with your contact information.Once the form is submitted, a Vintage King Audio Consultant will contact you as soon as possible with our best price on this product.

VIEW
156777
I would like to thank VK for the wonderful sales assistance, service and prices. This was my first purchase with you and it won't be my last. I only wish I'd discovered you years ago!
Matthew R.
I had two Grammy wins this year - Ray LaMontagne & Carolina Chocolate Drops. Both made with help from Vintage King!
Ryan F.
In almost 20 years in Pro audio buying, never did I receive a unit so well packed and exactly as described. Works flawlessly. The whole process has been so smooth. I will never hesitate to do business with you guys in the future and will recommend you to everyone I know.
Martin C.
This was my first experience buying something from Vintage King (although I surf the "used" categories on the website frequently!), and, despite being on the other side of the world, I had absolutely no trouble and everything went very smoothly.
Phil T.
The speed of delivery exceeded my expectations! I was VERY pleased that my shipment arrived in time for a scheduled vocal tracking session. The packing insured that my order arrived safely. And the sales staff responded quickly to questions regarding the product.
James P.
Thank you so much! Vintage King has been so fair and easy to work with. I can't thank you enough. It feels good to trust such a hefty purchase to folks who are so helpful and knowledgeable. Vintage King is a sound designers dream store.
Noa L.
You guys have excellent customer service and I am excited about the next upgrade I complete on my fifth recording facility. I've been in the studio business for forty plus years. The salesman I worked with at Vintage King was the best of the best. You all rock!
Robby T.
I would recommend Vintage King to any one looking for top-class gear, unbeatable customer service and the best prices on the map!
Jake D.
My experience with Vintage King was excellent. The order was here fast considering it was out of stock. The sales person had SKB send it to me directly and I couldn't have been more pleased.
Michael D.
From the minute I placed my order I was kept well-informed through each step in your process. Even though I was buying a comparatively modest piece of gear, your attention to detail made me feel like I was purchasing a six-figure mixing desk.
Thomas W.
I am a new customer of yours. You guys provided me the absolute best deals in ordering all the equipment to power my brand new recording studio. Your customer service is amazing and i will always deal with you from here on out.
Rob M.
Thanks for your great service and getting this out today. You guys really are the Kings!
Alan B.
Better than expected! Truly impeccable service. Your team was professional, knowledgeable, provided speedy delivery above and beyond standard. Vintage King Audio is definitely my go to for all of my audio and information needs.
James O.