Highlights From This Year's Show 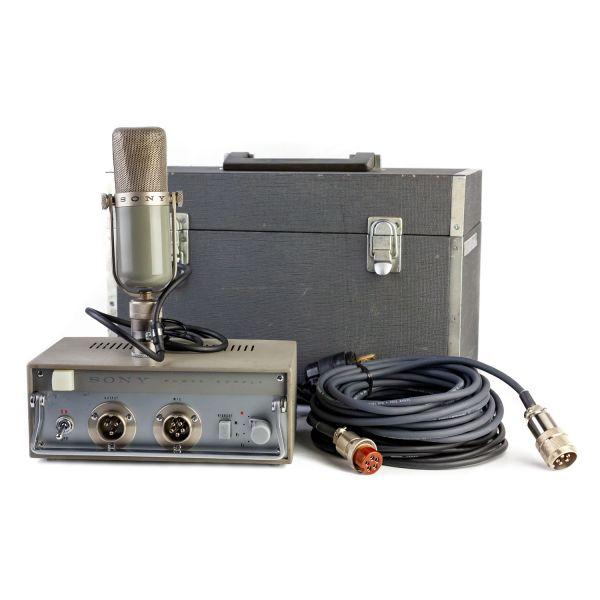 The C-37A takes its name from the size of the C-3 capsule, which is 37mm across (1.45"). The capsule has a 6 micron mylar diaphragm, with a layer of gold 3 microns thick, sputtered on the surface to make a conductive layer. The gold process proved far superior to the early NHK prototypes that used a silver-coated celluloid diaphragm, which was prone to noise and overheating. To harness the power of the new capsule, Sony engineers employed a method similar to an RCA 77 ribbon microphone: using a chamber behind the capsule that could mechanically alter the polar pattern from cardioid to omnidirectional, with the turn of a screwdriver.

The heart of any tube mic is of course the tube, and the C-37A uses a 6AU6 pentode wired as a triode. Providing power to the mic was accomplished at first with the CP-2 tube psu, which allowed for three different bass rolloff settings, marked V (Voice), M1 and M2 (Music). Later, the CP-3 and CP-3B solid state psu's appeared, featuring a four-position bass rolloff as well as a switch to engage the high-frequency rolloff. Two impedance and output level settings, as well as operating voltage, were also user-adjustable.

The early Sony prototypes with the new capsule were used to record the NHK symphony rehearsing in the studio under visiting conductor Herbert von Karajan in 1954. The results were so encouraging that engineers pressed ahead with the designs, and the C-37A became commercially available in Japan the following year. The microphone finally made its American debut at the 1958 Hi-Fi Show in Los Angeles, and soon became a fixture in town at Capitol Studios, where it was used extensively by Frank Sinatra and Nat 'King' Cole. The sound of the mic was considered so good, it was proudly displayed on album jackets. The chief recording engineer for Capitol at the time said "Never before have I seen such a wide frequency band or such a smooth response in the upper range." He was right; the mic had a frequency response from 30 Hz to 16 kHz, slightly wider than its inspiration and competitor - the Neumann U47.

The excellent performance of the C-37A got great reputation in the entire field of acoustic concern when it was introduced, and it has been used in world-wide broadcasting stations, film studios, recording facilities, etc., where superior characteristics and reliability is required, owing to its stable function, excellent performance, simple operation and rigid construction.

The upper part of the microphone is a C-3 capsule mounted in the metal netting, and the lower part, inside of the metal case, is a cathode-follower circuit including an electron tube 6AU6. The entire internal assembly is rigidly shielded against an external static field.

The diaphragm of the microphone capsule is a very thin plastic film sputtered with pure gold. Since this diaphragm is mounted on the capsule so that it may get full damping effect acoustically, the condenser microphone model C-37A shows very excellent high frequency performance."

Please fill out the form below and a Vintage King Audio Consultant will contact you with a ship date for the Sony C37a Dual-Pattern Tube Microphone #3667 (Vintage).

Have a better price in mind for the Sony C37a Dual-Pattern Tube Microphone #3667 (Vintage) that you've been checking out? We're willing to work on it!Please fill out the form below with your contact information.Once the form is submitted, a Vintage King Audio Consultant will contact you as soon as possible with our best price on this product.

VIEW
134405
I would like to thank VK for the wonderful sales assistance, service and prices. This was my first purchase with you and it won't be my last. I only wish I'd discovered you years ago!
Matthew R.
I had two Grammy wins this year - Ray LaMontagne & Carolina Chocolate Drops. Both made with help from Vintage King!
Ryan F.
In almost 20 years in Pro audio buying, never did I receive a unit so well packed and exactly as described. Works flawlessly. The whole process has been so smooth. I will never hesitate to do business with you guys in the future and will recommend you to everyone I know.
Martin C.
This was my first experience buying something from Vintage King (although I surf the "used" categories on the website frequently!), and, despite being on the other side of the world, I had absolutely no trouble and everything went very smoothly.
Phil T.
The speed of delivery exceeded my expectations! I was VERY pleased that my shipment arrived in time for a scheduled vocal tracking session. The packing insured that my order arrived safely. And the sales staff responded quickly to questions regarding the product.
James P.
Thank you so much! Vintage King has been so fair and easy to work with. I can't thank you enough. It feels good to trust such a hefty purchase to folks who are so helpful and knowledgeable. Vintage King is a sound designers dream store.
Noa L.
You guys have excellent customer service and I am excited about the next upgrade I complete on my fifth recording facility. I've been in the studio business for forty plus years. The salesman I worked with at Vintage King was the best of the best. You all rock!
Robby T.
I would recommend Vintage King to any one looking for top-class gear, unbeatable customer service and the best prices on the map!
Jake D.
My experience with Vintage King was excellent. The order was here fast considering it was out of stock. The sales person had SKB send it to me directly and I couldn't have been more pleased.
Michael D.
From the minute I placed my order I was kept well-informed through each step in your process. Even though I was buying a comparatively modest piece of gear, your attention to detail made me feel like I was purchasing a six-figure mixing desk.
Thomas W.
I am a new customer of yours. You guys provided me the absolute best deals in ordering all the equipment to power my brand new recording studio. Your customer service is amazing and i will always deal with you from here on out.
Rob M.
Thanks for your great service and getting this out today. You guys really are the Kings!
Alan B.
Better than expected! Truly impeccable service. Your team was professional, knowledgeable, provided speedy delivery above and beyond standard. Vintage King Audio is definitely my go to for all of my audio and information needs.
James O.