Catalinbread's Ampeg-voiced, foundation overdrive bridges the “Get Yer Ya-Ya’s Out!” (Stones) and the desert sound (Stoner) eras
MFR# SFT (Ampeg Amp emulation)
Shop All Catalinbread
Skip to the end of the images gallery 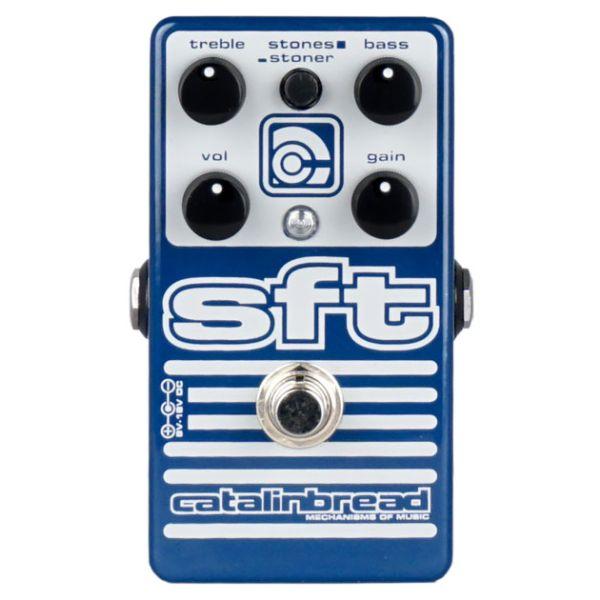 The Catalinbread SFT is one of the Foundation Overdrives – pedals can give you big, cranked up amp response at non-cranked volumes. To use it as intended, you’ll want your amp set to a relatively clean, flat response. In fact, the new SFT is Catalinbread's widest ranging Foundation pedal yet and responds particularly well to fuzzes, boosts, and overdrivers. To get acquainted with your new SFT, let’s plug it in by itself, without your other pedals. Start off with a clean sound from your amp.

This switch completely reconfigures the SFT and makes it become a completely new beast. Think Jekyll and Hyde! Two pedals in one! Stones Mode is super-refined and Stoner Mode is raw and unleashed! If you want the most authentic big Ampeg tube amp response, use Stones Mode. If you want a rippin’ high gain distortion sound that can achieve huge fuzz tones, use Stoner Mode.

Set Treble/Bass knobs to noon for a relatively flat response. Below noon to cut and above noon to boost. These are treble and bass shelving controls and have been carefully voiced for the SFT. In Stones mode, setting all controls at noon will give you a flat response with a slight emphasis on the lower mids to give that big bodied Ampeg sound. To get more of a mid-hump response, try starting with Bass at 9:00 and Treble at noon. The Treble control is voiced to boost not only the highs but the upper mids as well so you can turn the Treble control up a bit to get more mids to crunch through. Try setting the Treble from noon to about 1:30 to boost some upper mids without increasing the treble too much. Also, turning the Gain control up will provide more push in the midrange as well. And if you want to scoop the mids, just turn the Treble and Bass controls up. This is most effective when you run with lower Gain settings.

Turning the Bass control down from noon gives a high-pass shelving response around 200hz. This allows you to tighten up the response and attenuate those woolly and woofy frequencies. Turning up the Bass control boosts all those frequencies. You’ll notice as the Bass control is turned towards maximum, there will be a huge bump in low end. Huge. For most purposes that is too much boost of the low end! That huge amount of low end boost is there so you can crank it for the fuzz setting in Stoner mode.

Turning the Treble control down from noon gives a low-pass shelving response at around 1000hz. Typically you’d turn the Treble down below noon in the following situations: you’ve got the Gain set low for clean response, you’re in Stoner mode dialing in a woolly fuzz tone, or you’re playing bass. Turning up the Treble control first gives you a nice kick in the upper mids from noon to 2:00 and then beyond that the sound will get increasingly more trebly. For most uses on guitar in Stones mode, you’ll probably find yourself setting the Treble from noon to 2:00.

In Stones Mode, the range of the Gain Knob has been tuned to be very similar to that of the volume control on a big non-master volume tube amp. So, from minimum Gain to about 10:00, the response will be clean and bright. From 10:00 to noon, you’ll get edge-of-breakup response that is very sensitive to pick attack. From noon to 2:00, you’ll hit the overdrive sweet spot, just like that of most tube amps. And from 2:00 on, you’ll get increasing crunch and saturation. Now, just like with real tube amps, the amount of overdrive you get with the SFT depends on the type of guitar you’re using. So, if you’re using a Fender-style guitar with vintage output pickups, you’ll have to turn up the Gain more to crunch it out or use a booster/fuzz pedal in front. Just like how you would with a real amp. Or, if you’re using something with a humbucker, you’ll have to turn the Gain down to get a cleaner response. Some guitars with high-output pickups may crunch out the pedal even with the Gain turned down. Just like with a real amp! Also, just like a real amp, SFT responds really well to turning your guitar’s volume down. So you can set the SFT up for a nice saturated crunch and clean up instantly by rolling your guitar volume back. Also, just like real non-master volume tube amps, you’ll find that you set the tone controls differently depending on where the Gain is set. If you’re going for a clean sound with the Gain set below noon, you might end up using less Treble but more Bass. And conversely, if you’re going for cranked up amp sound, you’ll find you’ll want to turn the Bass down and the Treble up to get a good crunch sound that cuts through the mix.

The SFT was designed to give a huge amount of output even with clean low gain settings. So, if you’re running the Gain control really low, you’ll find that there is plenty of output on the Volume knob to boost that clean sound quite loud! But if you’re running higher gain sounds, especially in Stoner mode, you’ll find that you won’t have to turn the Volume control up much at all.

When you’re in Stoner Mode, the controls still work basically the same way but you’ll find that you will run the Treble, Bass, and Gain knobs lower than you would in Stones mode due to all the extra gain and frequency content.

Please fill out the form below and a Vintage King Audio Consultant will contact you with a ship date for the Catalinbread SFT.

Have a better price in mind for the Catalinbread SFT that you've been checking out? We're willing to work on it!Please fill out the form below with your contact information.Once the form is submitted, a Vintage King Audio Consultant will contact you as soon as possible with our best price on this product.