$ 399 .00
No interest if paid in full within 12 months Learn more
Fast eDelivery
Quick email delivery of this software license is available when you order between 9:00am and 4:30pm (ET) Mon - Fri. Note: Software is not returnable, so please call if you need advice about compatibility or version.

Multi-tap surround delay 8 fully independent, surround-pannable delay taps and dedicated reverb on every delay tap
MFR# Slapper 2
Shop All The Cargo Cult
Skip to the end of the images gallery 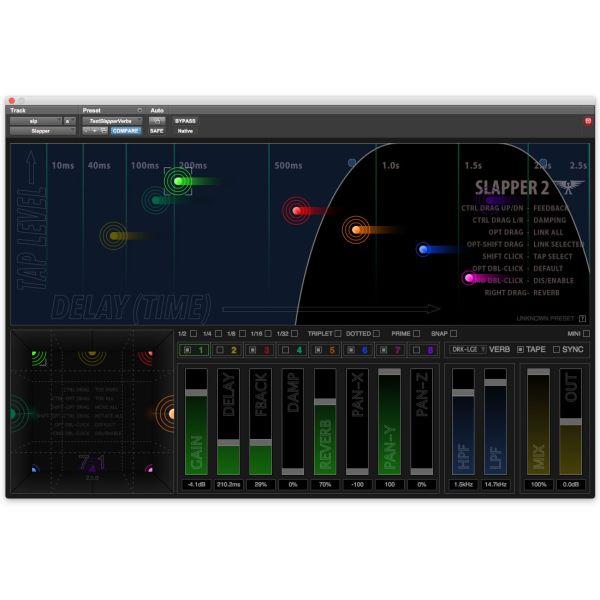 Cargo Cult Slapper 2 is a multi-tap surround delay with a stunningly intuitive interface, fantastic console integration and some freakish sound design potential. You can make anything from an attic to a canyon... from a simple vocal slap to insanely complex syncopated grooves - and you'll do this quickly, and precisely, and with a big smile on your face. Slapper's interface is so intuitive, so ergonomically tuned, that it really is a joy to use. Whatever you do with it, it's always going to look exactly like it sounds.

You should think of it more like 8 delays in one box. Each tap has completely separate delay time, level, feedback, reverb, damping and pan position. And everything is fully automatable.

So you can have very short bright delays up front with long dark echoes feeding back in the surrounds. Or a simple mono slap which slowly expands to stereo as the chorus kicks in. You can even use tape-mode to pitch warp a couple of taps while leaving the rest static.

Dedicated reverb on every delay tap

With Slapper 2.x every tap now has it's own dedicated mono reverb which pans around the space along with the delay signal. The aim was simply to soften the slaps, but what Cargo Cult ended up creating a whole new class of effect. You can build realistic small rooms, city streets, or freaky, psychological flashbacks, all within the one plugin.

Like grabbing the flange of an old tape machine while feeding back into it, Slapper can varispeed a signal in realtime, as you change the delay length. The result is an incredible mind-warping speed ramp which you can directly perform using your mouse, mix surface or automation. You can even pitch dive all 8 taps at once while spinning them around the room. Just keep a bucket handy.

Cargo Cult doesn't abide mimicry of ancient workflows or medieval design practices. They have carefully designed Slapper's interface to give the most immediate feedback, in the most intuitive way, and to give the user the most direct access possible to the objects they are hearing.

Slapper looks exactly like it sounds... and not at all like a dusty rack mounted collection of rotary knobs and switches from 1968.

Each tap offers it's own independent damping control, under which lies a pair of filters. The HF cut is steeper while the LF cut is a little mellower. The end result is a carefully sculpted bandpass effect which gradually pushes the signal further and further into the distance as it feeds back.

Then there are the main output filters, which present as LPF and HPF controls. These are classic 12db IIR filters which affect the overall output of the plugin, after the taps have done their work and been panned to the output channels.

By messing around with the balance between these two filtering approaches, you can achieve an incredible variety of spaces in a very short amount of time.

In combination with Sync-Mode, Slapper's tempo grid system opens up all kinds of wacky possibilities for timed delays. You can show and hide different grids based on tempo or prime numbers, and either snap to them or simply use them as a general guide. The result can be super precise rhythmic delays or messed up syncopated grooves that you've never heard before.

Sync-Mode is also automatable so you can jump in and out of rhythmic delay mode throughout the length of your project.

Cargo Cult spent a lot of time playing around with Slapper and making presets and they know you're going to burn many hours doing the same. It's just so addictive that they ended up with a stack of great factory settings covering everything from tiny attics to massive exteriors and endless timed grooves. You'll find stuff from other users, stuff that sounds incredibly real, and stuff that sounds completely out of this world.

Cargo Cult have put a lot of thought into the console layouts for Slapper, and they reckon you can get great results really quickly by setting up spaces on a hardware controller.

The layouts for the bigger consoles are incredibly intuitive, with a single channel strip representing a single tap, and the 8 taps spread across an 8-fader bucket. Even the little Artist Mix presents Slapper in a very ergonomic way, with each page covering a single tap plus the main output filters and 8 enable buttons on every page.

Slapper has a ton of different input and output combinations available, from mono thru to 7.1, so you should never be hobbled by an awkward track format. You can set up stereo aux as a delay return with a 7.1 Slapper inserted - or Audiosuite an interior room setting onto a mono FX region.

Slapper also takes care of automatic downmixing when your presets are larger than your chosen output format, so those lush surround presets are still available when you're working in stereo.

Please fill out the form below and a Vintage King Audio Consultant will contact you with a ship date for the Cargo Cult Slapper 2 - Electronic Delivery.

Have a better price in mind for the Cargo Cult Slapper 2 - Electronic Delivery that you've been checking out? We're willing to work on it!Please fill out the form below with your contact information.Once the form is submitted, a Vintage King Audio Consultant will contact you as soon as possible with our best price on this product.