BURL Audio B4 Mic Preamp Daughter Card for B80 Mothership 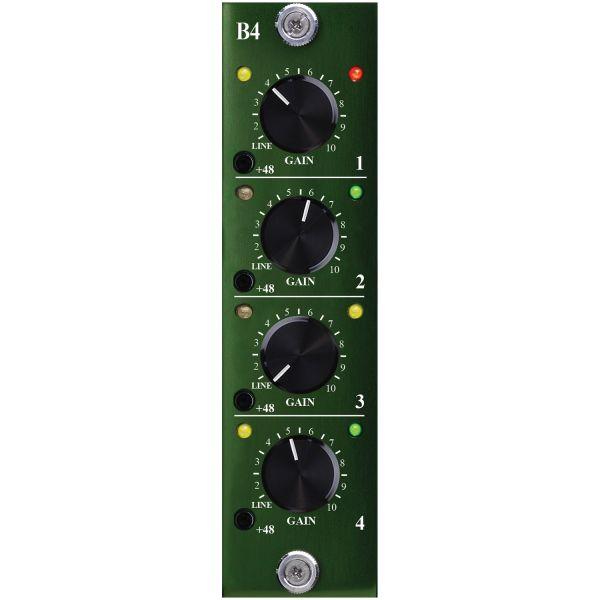 The Burl Audio B4 is a four-channel microphone preamp daughter card for the B80 Mothership. Featuring four mic/line inputs, pristine-sounding analog to digital conversion, and an all Class A discrete signal path, the B4 is a must-have daughter card for any Mothership owner.

Featuring the newly designed BX6 input transformer, the B4 mic pre is capable of dialing in a wide range of sounds. At low levels, the B4 delivers a crisp, clean sound akin to high-end digital preamps. Crank up the gain to drive the BX6 input transformers for loads of classic analog saturation.

Burl Audio are known for their innovate B80 and B16 Mothership rack devices, which can be customized with preamps, digital audio converters, word clocks and more. Each daughter card is equipped with transformers in the input stage and op-amps in the output stage, combining the flexibility and pristine sound of digital audio with the character and attitude of an all Class A discrete signal path. Perfect for home studios, commercial recording studios and post-production houses and broadcast facilities, the Mothership can be customized to suit any session. And with digital control options for SoundGrid, Dante and more, the B80 Mothership can even be used as a studio-grade stage box in live sound applications.

Please fill out the form below and a Vintage King Audio Consultant will contact you with a ship date for the BURL Audio B4 Mic Preamp Daughter Card for B80 Mothership.

Have a better price in mind for the BURL Audio B4 Mic Preamp Daughter Card for B80 Mothership that you've been checking out? We're willing to work on it!Please fill out the form below with your contact information.Once the form is submitted, a Vintage King Audio Consultant will contact you as soon as possible with our best price on this product.