$ 3,499 .00
or $146/month for 24 months 0% interest for 24 months. 24 equal monthly payments required. Learn more
PayPal Credit, Express Checkout and Pay in 4 available.
In Stock
Item is in stock and will ship the next business day. Place your order before 4:00pm ET Mon-Fri and we will ship your items the same day. 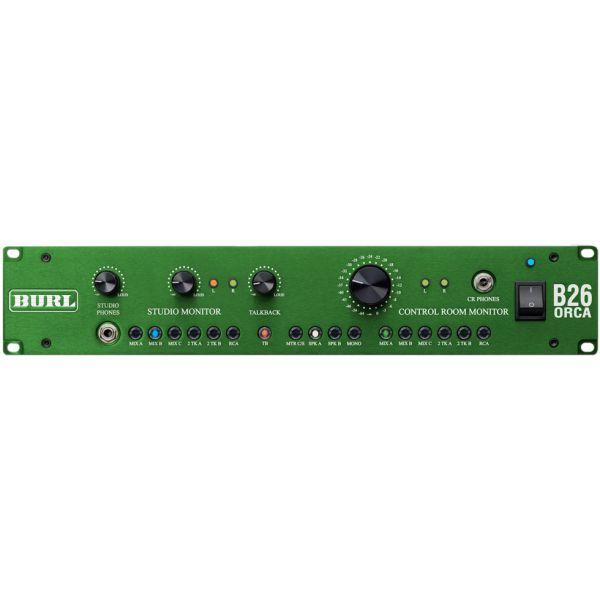 The Burl Audio B26 Orca is an all-analog control room monitor designed for the ultimate monitoring experience. Equipped with Burl Audio’s legendary all-discrete Class A circuitry, the B26 Orca lets you monitor your mix without any added character or artifacts. With five stereo inputs, three stereo outputs, and two dedicated headphone outputs, the B26 Orca offers unparalleled monitoring flexibility.

The Burl B26 Orca is meticulously built to provide the best monitoring audio path possible. By utilizing Burl’s proprietary Class A discrete op-amps, the B26 Orca is able to deliver pristine clarity. Featuring a completely transformerless design with no capacitors or integrated circuits, the B26 Orca allows you to make critical mix decisions with confidence.

The B26 Orca is equipped with three stereo mix inputs and two sets of stereo two-track inputs, each calibrated to +4 dBu line level, allowing you to connect up to five pro audio playback devices. Additionally, you can connect consumer devices like cell phones, laptops and stereos using the RCA inputs. The B26 Orca also features a dedicated talkback mic input, specially calibrated for a Shure SM58.

The output section of the B26 Orca offers two dedicated Speaker outputs, intended for main and near-field monitors. Send a separate mix to the performers in the studio using the dedicated Studio output.

The front panel of the B26 Orca is split into two sections: one for the control room and one for the studio. Control output levels for each mix independently using audiophile 0.1% matched-resistor, stepped attenuators for precise level control. Quickly select the control room input using six push-button selectors on the front panel. Toggle between speaker A, speaker B and mono output options to dial in the perfect mix. Or plug in your headphones to the front-panel output for hyper-detailed monitoring. Choose between six inputs for the studio outputs, and adjust the level using the studio monitor controls. Create custom mixes for performers in the studio, independent of what you’re hearing in the control room.

Please fill out the form below and a Vintage King Audio Consultant will contact you with a ship date for the BURL Audio B26 Orca Control Room Monitor.

Have a better price in mind for the BURL Audio B26 Orca Control Room Monitor that you've been checking out? We're willing to work on it!Please fill out the form below with your contact information.Once the form is submitted, a Vintage King Audio Consultant will contact you as soon as possible with our best price on this product.