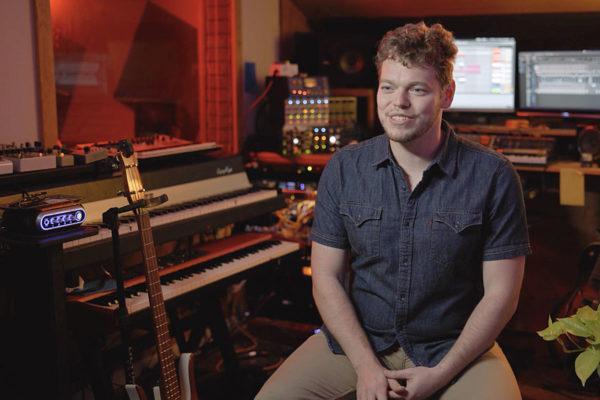 Peter Eddins is a renowned multi-instrumentalist, producer and composer who has worked with superstars such as DJ Khaled, Drake, Adia Victoria and many others. Over the years, Pete has penned hits across many genres, including hip hop, pop, R&B, rock, folk and jazz—and he does it all from the comfort of his own home, in an impressive studio tucked away in the quiet streets of Nashville.

Peter got his start playing music in middle school when he first picked up the saxophone. After graduating to an MPC-style controller in high school, he began making and selling beats. Shortly after, he earned his undergraduate degree in classical composition from Berklee College, then went on to pursue a master’s degree in film scoring. In 2015, Peter put his skills to the test while conducting a full orchestra at the legendary Abbey Road Studios.

Since then, Peter has moved to Nashville, where he’s been working for the last six years. Recently, he moved into his new home studio in West Nashville, which is centered around a multi-interface Focusrite recording rig, featuring a Focusrite OctoPre and the new Focusrite Clarett+ OctoPre, as well as a standalone ISA One preamp for recording.

For signal processing, Pete uses his trusty WA-73 EQ and WA-76 and WA-2A compressors, along with a 500 Series rack filled with classics like Rupert Neve Designs 535 compressors, Elysia Mpressors, and Lindell Audio EQs. When it comes to mics, Pete relies on staples like the Shure SM7b, Electro Voice RE20 and AKG C414 XL II, in addition to modern classics like the Warm Audio WA-251.

In our latest Inside Look, we’re going behind the scenes with Peter Eddins to check out his home studio and talk about his setup. Watch the video below to learn more about his process, how he got his start, and some of his favorite gear.

Whether you're looking to build a studio from the ground up or want to expand your current facilities, Vintage King is your ultimate resource. Contact a Vintage King Audio Consultant via email or by phone at 866.644.0160 to get started today!
Products in this Article
Categories: Inside Look
Tags: featured, Nashville, Studio Installs, Customer Stories, Music City, Client Stories & Peter Eddins
Posted By: Brad Pack