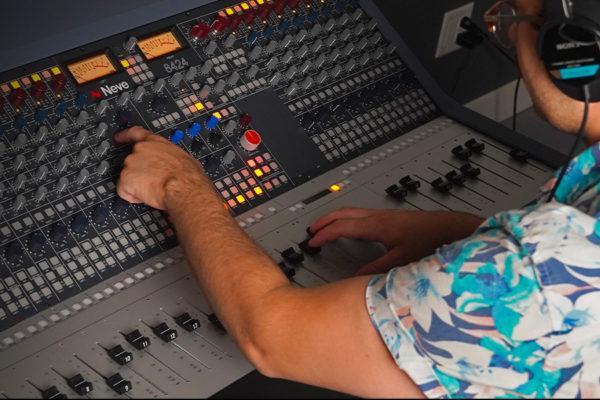 However, with so many great models to choose from, it can be tough to tell which desk is right for your studio. In this buyer’s guide, we’ll break down the differences between each AMS Neve console to help you find the right one, including the 8424, BCM10/2 Mk2, Genesys, Genesys Black and 88RS consoles.

The 8424 console is tailor-made for hybrid studios, featuring seamless synergy with popular DAWs and plenty of connectivity for your favorite outboard gear. Under the hood, the 8424 is equipped with Neve’s famous Marinair transformers, originally designed for Neve’s early 80-series consoles. Combined with the 8424’s unique mix bus, which uses voltage mixing topology, the 8424 console delivers the classic Neve sound with a broad frequency response, transparent dynamics and immersive stereo imaging.

The center section features two 1073 preamps and two Class-A DI’s for direct recording, as well as two VPR alliance-specification 500 series slots, built-in master bus EQ and a unique stereo width feature which provides huge benefits when mixing or mastering.   The console has a total of 76 line inputs, 52 of which can be mixed simultaneously, meaning you’ll never run out of I/O for larger mix sessions. Plus, the 8424 offers an array of creative tools to help you get the job done, including 24 dual-input channel strips for simultaneously connecting DAW returns and recording inputs, with 24 direct outputs for tracking channels back into the DAW, 24 inserts for outboard signal processing and four dedicated sends for aux effects and cue mixes. Expand your recording capabilities even further with the 1073OPX, an optional expansion that adds up to 24 1073-style preamps to your console.

Best of all, the 8424 combines your favorite large format features with versatile digital control technology, giving you full tactile control over your session. Expansive monitoring options—including three loudspeaker outputs, dual headphone outputs and extensive metering—make it easy to integrate into any setup. The onboard recall system with external app control, smart routing and motorized faders offer seamless multi-DAW control, streamlining your workflow and saving you time.

Available in a variety of configurations to suit any studio setup, the BCM10/2 MkII is the ultimate solution for those seeking the classic Neve sound in a compact, customizable package. Available with 10,16, 24, 32 or 48 channels, configurable with either the modern 1073N,  hand-built 1073 Classic, or 1084 modules the BCM10/2 MkII has enough analog processing power to capture a full live band. Combined with Neve’s legendary Class-A topology and Marinair Transformers, the BCM10/2 MkII console adds the perfect amount of analog grit and color to any recording.

As an evolution of the classic BCM10 console designed in 1961, the modern BCM10/2 MkII introduces a number of versatile new features for modern producers. The new 1952 channel routing module handles channel bussing and routing, plus updated switching options allow you to tailor your console to your workflow. Each channel features a switchable balanced insert for connecting your favorite outboard processors, as well as direct outputs for tracking and stem mixing.

When it comes to the mix bus, the BCM10/2 MkII console features two stereo mix bus inserts with wet/dry controls for parallel processing, as well as two 500 series slots for creating custom mix bus signal chains. Dual DI inputs with cue send, AFL and solo isolation make it easy to incorporate signals from external sources into your mix. Plus, with advanced monitor controls, support for 5.1 monitoring and three loudspeaker outputs, the BCM10/2 MkII can tackle any project, large or small.

The Genesys console’s unique hybrid workflow seamlessly interfaces with your most popular DAWs. The optional onboard AD/DA cards handle all conversion internally and connect via multi-mode MADI optical, allowing you to connect to a laptop or PC using a single USB cable. The Genesys comes with Neve’s proprietary Encore Plus automation system, enabling smooth, flying fader style automation for final mix touch-ups, and with digitally-controlled analog hardware and multi-layer control, you can quickly recall even the most complex mix sessions. Perhaps best of all, you can dial in your mix using the tactile response of physical faders, buttons and knobs, tweak your analog signal processors and completely automate the console's analog channel strips right from your desktop using AMS Neve’s intuitive Genesys Control plug-in.

Equipped with AMS Neve’s advanced monitoring system, derived from the 88R console, Genesys offers impressive bandwidth and unmatched headroom. Add in hyper-accurate PPM/VU scale 48-segment LED meters, as well as support for stereo, surround and stem mixing, and it’s no wonder why the Genesys console is used by top engineers and sound designers all over the world.

The central multitouch screen becomes a host for your DAW session providing accurate, hands-on control with customizable touch response. A bank of 16 dedicated DAW faders—complete with mutes, cuts, solos and automation controls—gives you complete control over your sessions and for larger sessions, the analog console faders can be flipped into DAW mode for more advanced hybrid workflows.

It all starts at the top of the signal chain with AMS Neve’s next-generation input modules, one of which features a dual-line input (with remote preamp capability) and the second features a Marinair transformer-balanced preamp with plenty of classic Neve punch. Each channel strip comes equipped with variable input filters, as well as legendary 88RS 4-band parametric EQs with overlapping frequency ranges and automatic proportional Q. The two mid-bands have variable controls for Q, gain and frequency, while the high and low-frequency bands feature variable gain and frequency controls with switchable Q and switchable peak or shelf curve.

Each channel also features a powerful VCA compressor/limiter with rotary controls for release, threshold, ratio and up to 30dB of make-up gain. Fine-tune your dynamics with advanced controls for sidechain EQ, stereo linking and a musical-sounding auto-release setting. The dynamics section also includes a versatile gate/expander with rotary controls for range, threshold, release time and a switchable attack time. The unique “hysteresis” control allows you to set separate thresholds for rising or falling signal levels to prevent unwanted artifacts or clamping effects.