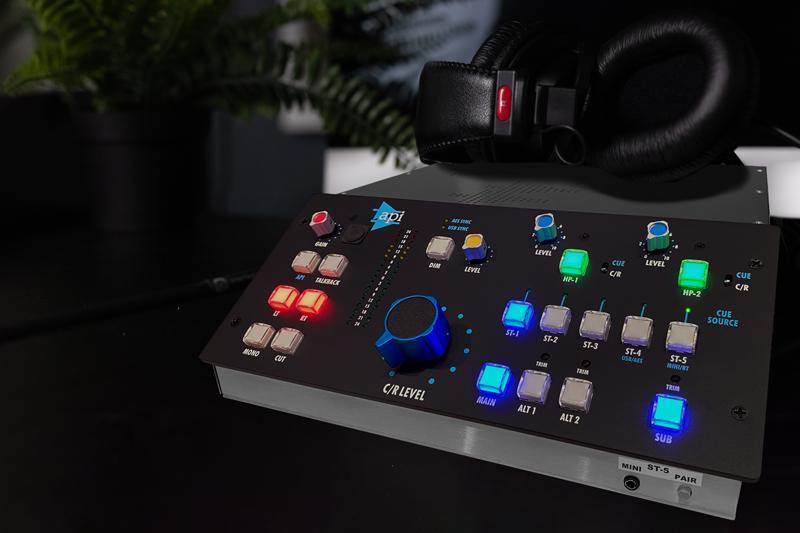 Compact enough for use in small home studios and versatile enough to meet the needs of the most demanding full-sized commercial recording facility, the MC531 puts the center section of a classic API console at your fingertips, offering three stereo outputs, seven stereo inputs and a built-in talkback mic. And we just love how easy it is to integrate almost any source into your system with versatile input options like AES, USB, 3.5mm and even Bluetooth! Let’s take a closer look at some of the features to see what makes this controller so appealing.

On the rear panel, the API MC531 features three sets of transformer-balanced XLR outputs. Each output has its own dedicated button on the front panel, making it easy to toggle between your main and alternate studio monitors. Additionally, both of the alternate outputs feature a -12 dB to +6 dB trim pot so you can level-match each set of speakers for fair and consistent comparisons.

The rear panel also has a dedicated subwoofer output, which can be linked to any of the main and alternate outputs. The sub is automatically activated when selecting any of its linked monitor outputs, so you don't have to manually toggle the sub on and off when selecting monitoring options.

The sub output is a mono, unfiltered sum of selected Left and Right monitor outputs, meaning you’ll want to make sure you use a sub with built-in filtering or use an external filter before feeding the signal to your sub. The sub output also features a dedicated -12 dB to +6 dB trim pot on the front panel to match the level output with the selected set of monitors.

The API MC531 is equipped with seven stereo input sources, including three balanced, low-impedance, line-level ¼” TRS jacks on the rear panel, selectable using the ST-1, ST-2 and ST-3 buttons on the front panel. Additionally, the ST-4 button can be used to select the USB input source, perfect for connecting laptops and other USB audio devices, as well as the AES input source, which can be used to integrate with complex multi-room facilities.

The ST-5 button is used to select the MINI input source, which is fed using the 3.5mm mini plug jack on the front or rear panel, making it easy to reference tracks from your phone, tablet or other devices. The ST-5 button can also be used to select the Bluetooth input source, allowing you to stream music directly to your monitor controller from any Bluetooth device. A convenient Bluetooth Pairing button is located on the front panel for quick and easy access. You can even connect to multiple Bluetooth devices simultaneously!

The API MC531 also includes two ¼” stereo TRS outputs on the rear panel for tracking and overdubbing or simply referencing your mix on your favorite pair of headphones. The amplifier circuit is the same as found in API consoles such as THE BOX, 1608, 1608-II, and 2448.

The MC531 is also equipped with a talkback mic that can be added to the selected source for the headphone amplifiers. The talkback mic features a dedicated gain knob, a press-and-hold-style button, and automatically engages the DIM function when engaged.

Last, but certainly not least, the MC531 adds some flair to your desktop with a classic extra-large API 41-detent Control Room Knob in the center. Above, you’ll find the DIM button with dedicated level controls, and a high-resolution 18-segment LED meter.

To the left, you’ll find basic monitoring controls such as LT, RT, MONO and CUT, as well as an “API” button that routes monitor outputs through an API 2520 and custom transformer output stage to ensure optimal performance. When the API button is disengaged, signals are processed using an electronically balanced output stage.

With all of these features at your fingertips, the API MC531 monitor controller is a versatile monitoring solution for studios of any size.

If you have any questions about the Solid State Logic BiG SiX or would like to purchase the desktop mixer, we're here to help! Please contact a Vintage King Audio Consultant via email or by phone at 866.644.0160.
Products in this Article
Categories: Product News
Tags: featured, Monitor Controller, API, MC531 & API MC531
Posted By: Brad Pack