Music Documentaries To Watch Over The Holidays [2021 Edition] 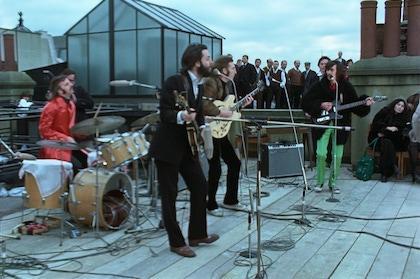 Have you even lived in 2021 if you haven't discussed The Beatles: Get Back with your friends for at least three times the film's length? The Disney+ series about the making of Let It Be has certainly dominated conversations in pro audio circles since it dropped Thanksgiving weekend. Yet, it wasn't the only music documentary released this year.

As is tradition around these parts, every December, we gather a list of our favorite music and studio-based documentaries of the year for you to check out during the holidays. We're going to talk a bit about Get Back, but we'll also break down films about Tom Petty, Tina Turner, Brian Wilson, the Harlem Cultural Festival and more.

The Beatles: Get Back

Alright, if you are one of the few people who are interested in making music or recording that hasn't watched Get Back yet, it's time. Put your phone down, sign up for Mickey's streaming service and lock in for nine hours of the most interesting footage you've ever seen in your life.

Chronicling the recording of Let It Be (and the disintegration of the world's most beloved band), this Peter Jackson-helmed documentary series provides unfettered access to genius at work in pretty much real time. Classic songs are written on the spot,  genius works are met with a chorus of "Meh," John's funny, Paul's demanding-but-productive, George leaves, Ringo is an MVP.

Perhaps the most exhilarating thing about Get Back is watching the production team at work. To see George Martin, Geoff Emerick, Glyn Johns and others shine while capturing The Beatles is just as beautiful as the music the Fab Four created.

Clara Rockmore, Daphne Oram, Suzanne Ciani, Laurie Spiegel... The list of influential female electronic musicians and synthesists goes on and on, but their contributions to the art form often go unacknowledged. That's where Sisters with Transistors steps in. This brilliant documentary shines a light on the lengthy history of visionary women in electronic composition, but also explains how these artists used new tools to shape the sounds and production styles that we hear today.

Alright, who's been hiding the 1969 Harlem Cultural Festival footage from us?! We want to know! Thankfully, director Ahmir "Questlove" Thompson has created a stunning documentary about the oft-overlooked festival (thanks Woodstock), with enough incredibly stirring performances to make your heart leap out of your chest. Nina Simone, Stevie Wonder, Sly Stone and others soundtrack this story of Black history and culture at one of its most important moments.

Tom Petty: Somewhere You Feel Free - The Making of Wildflowers

Another new documentary made of film shot during the making of a historic event! Quit holding out on us! Tom Petty's second solo record, Wildflowers, was his first effort with producer Rick Rubin at the helm. Somewhere You Feel Free - The Making of Wildflowers lets us in on the process through archival footage and newly discovered 16mm film from 1993 to 1995. Want to know the best part? The whole doc is on YouTube for free and you can watch it below.

Despite a lifetime of personal and professional struggles, Tina Turner is a force of nature. She lets nothing get in the way of putting on a show. And that's all on display here in Tina. The documentary has everything from heartbreak to redemption, but its most endearing quality is showing a consummate performer at her best over the course of six decades in music, film and beyond.

Watching black and white footage of The Beach Boys in the recording studio is something to behold. The thing that most captivates our attention though is Brian Wilson behind the console. The compositions in his head are becoming a reality and he's truly one with the music. Throughout Brian Wilson: Long Promised Road, we get a view into the mind of this brilliant songwriter and producer via a number of car ride interviews.

If you didn't get enough George Martin in Get Back, Under The Volcano will solve that problem. This documentary from filmmaker Gracie Otto chronicles the history of George's AIR Montserrat studio in the Caribbean. Opened in 1979, the studio would become an essential home for a wide array of artists, including The Police, Dire Straits, The Rolling Stones, Paul McCartney and more.

Many of the artists covered on this list reached the highest of highs for a brief period and then called it quits. That's not the story of Sparks. Brothers Ron and Russell Mael have remained consistent in their fantastic output since debuting as Halfnelson in 1971. Throughout the duration of The Sparks Brothers, we are shown how true artists can change gracefully over time while still retaining the independent and unique qualities of their music.

See some gear in one of these docs you like? Want to chat about how to get the sounds of these artists? We want to hear from you! Please contact a Vintage King Audio Consultant via email or by phone at 866.644.0160.
Categories: Fun Stuff
Tags: featured, Documentaries, Music Documentaries, Holidays, The Beatles, Get Back, Tom Petty, Tina Turner, Brian Wilson, Sparks & George Martin
Posted By: Eric Allen