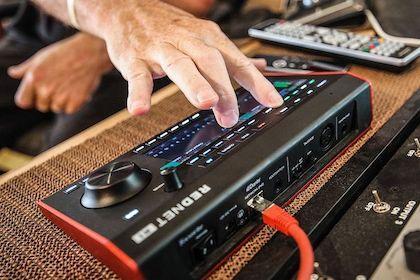 As more and more audio creators make the leap to working in Dolby Atmos, many pro audio manufacturers are working to streamline the gear and set-up involved. Focusrite has been at the forefront of this movement by releasing interfaces and controllers that make it possible to have an Atmos rig in any room.

Vintage King recently sat down with Focusrite Pro's North American Sales Manager Dave Rieley and Marketing Manager Tom Edwards to talk about configuring a Dolby Atmos set-up with Focusrite studio tools. Continue on for our conversation and learn how with a few simple pieces of gear, you can be ready for the Atmos revolution.

Can you explain the difference between traditional surround sound environments vs Dolby Atmos?
Dave Rieley: So surround sound as it’s described is sound around you, but it’s on one plane. Dolby Atmos is an immersive format, where speakers are hung above you to provide an overall atmosphere. When you have things moving above you, you feel like you’re interacting with it and inside of it. Surround never encompassed that. It’s such an interesting environment because of that.

Tom Edwards: I think the other big thing is that, because it’s mixed differently, you can move things around in a sound field that makes it feel like the space you hear every day. It makes you feel like you’re inside of the song.

How do you think the Atmos platform is going to change the way music and cinema is experienced?
TE: I liken it to what some call the “golden age of albums” in the 70s. You’d sit down with headphones on and a beer, and listen to a whole album. Now people mostly just listen while they’re driving or on their phones, or whatever. With the Atmos environment, I think we’re going to see more people sit and listen again, because it’s more immersive. It makes you want to just sit and listen.

DR: HiFi was one speaker. Stereo came out, and people didn’t quite know what to do yet. They didn't know how to pan stuff and things like that. That said, it was so mind altering, and it took a while for people to adopt it. I truly believe that this is slowly going to become the new thing. If you sit and listen to a production in Atmos, typically your mind is blown. It’s an emotional experience. It’s technology that has changed the game, because it is so impactful. As soon as people listen to it, they’re sold.

What are some pieces from Focusrite that are tailored to handle Atmos rooms?
DR: Honestly, a Red 16Line and an R1 controller is such a perfect way to get into Atmos. It just is. Having done engineering for many years, I want to put a focus on people being able to get into it. I want more people to experience it. I’m focused on how efficient the rig can be and how affordable the rig can be. A Red 16Line and an R1 controller to me is everything you need, because just using those two pieces can change your world. It’s nice because you can scale your rig from there if you decide to grow just by adding RedNet pieces. But getting into Atmos is now easy.

How would you go about building out an Atmos rig with Focusrite gear?
DR: For a person who just wants to start and feel it out, you could simply start with a Red and an R1. That’s the easiest way. For a medium rig, users can use a Red interface and add as many RedNet HD32Rs as you need to scale your environment. Then you can have 128 objects on 128 channels available in Pro Tools as you step it up. If you want to go the RedNet route without using any Thunderbolt interfaces (which is possible), that would be four of the HD32Rs in the Pro Tools environment. In the non-Pro Tools environment, it would be a PCIeR card (that’s the Dante card that gives you 128 channels each way). These things are super flexible.

If you want to have a two computer set-up, the second computer you would use specifically for your Atmos renderings. That would have its own PCIeR card, and then you can have any of the systems we described earlier for the main rig. The older route (MADI), is still an option too. We have a MADI box called the D64R, which has 64 channels of MADI. You can Dante over with previously mentioned rigs to the MADI system. We really do have options to allow for every sized system.

What considerations do engineers need to make when beginning to work in an Atmos environment?
TE: When mixing in stereo, we have to carve out spaces for each element in a stereo field. But now with the addition of so many speakers, there’s so much space to work with that a mix can lean on empty space actually. A lot of the great Atmos mixes, there’s so much room that just hearing the sound of the recording environment adds a lot of magic to the song. You’re able to hear each instrument with incredible clarity, and you hear the movement of reverbs and other elements around you as well. So I think it’s about the experimentation with leaving empty space rather than filling it with all kinds of additional elements.

How do you think users will benefit from using the Focusrite gear in environments designed for Atmos mixing?
DR: I think it’s the stability aspect. Whenever you go to one of the bigger installations, where you have 80 pieces of RedNet in a machine room, everything is stable. It’s solid. Nothing fails. When you’re doing your set-up, you know it’s going to work. We also have ways to save various routing matrixes and those preferences in the RedNet Control software. Essentially, we’ve tried to make it where A. We’ve got your back. B. The system’s going to be stable. I believe Focusrite just provides more overall value by having great support and consistency.

TE: The system is also so versatile. You know, these pieces work fantastic for Atmos, but if you’re just doing that a little bit and you’re still mixing in stereo, RedNet Control makes it so easy to switch back and forth between configurations.

What changes do you think an engineer’s workflow sees when transitioning to more expanded environment like Atmos? What priorities do you think change?
DR: The coolest thing I’ve seen that’s happened so far is people are rethinking how they approach recording. The capture phase is going to be the most exciting; The binaural heads that a few choice engineers use, MS mic technique and experimenting with a lot of different room mics. The possibilities that have opened up are really exciting. I think the use of space is going to totally change.

TE: Hearing engineers talk about the Atmos environment, it sounds like the early days of the recording revolution. People are experimenting with crazy things and trying new sounds. For so many people right now who want to become a mix engineer, this is a great opportunity. There are a million mix engineers now, but very relatively few Atmos engineers. There are way higher odds of success right now I think because it’s a smaller pool of people. If you're interested in learning more about Focusrite products or would to create a Dolby Atmos set-up for your studio, please reach out to us! Contact a Vintage King Audio Consultant via email or by phone at 866.644.0160.
Products in this Article
Categories: Post & How To
Tags: featured, Focusrite, Recording Engineer, Mix Engineer, Focusrite RedNet, Dolby Atmos, Dolby, Post-Production, Dolby Atmos Mix Room, Focusrite Pro, Focusrite Red & Focusrite R1
Posted By: Nathan Doyle