The Best Selling Outboard Gear of 2021 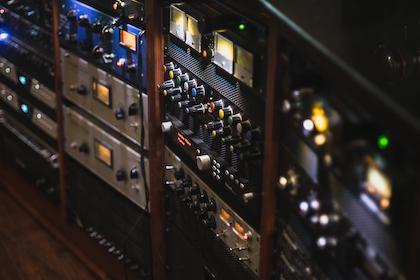 2021 is on the way out and that means it's time for Vintage King's annual retrospective of the best selling gear in some of our top categories. We're starting off with a heavy hitter this year! That's right, first up on the block is all things outboard gear.

Outboard gear is a unique category in that it really includes anything that alters or processes your audio signal outside of the console. For our purposes here, we'll be specifically discussing gear of the 500 Series and rackmount variety. So, sit back and get ready to check out our top sellers in the world of microphone preamps, equalizers, compressors and more.

Some classics need no introduction and the 1073 is one of them. Many consider it to be the best mic preamp in history! With Neve-designed handwound transformers and a fully discrete signal path, the 1073LB preamp delivers the classic console tone in a small, 500 Series format. The fine trim knob on the output stage allows users to drive input signals to the perfect amount of saturation, so you can find the perfect sweet spot for each source. Give the 1073LB a listen, and you’ll immediately see why it’s still number one.

Well known for its Air Band, the Maag EQ4 has become a bit of a modern classic in the control room. With ultra transparent sound, the EQ4 imparts a natural openness and allows users to dial in top end with the Air Band shelf reaching up to 40 kHz– making it a favorite on iconic vocals from Madonna to Snoop Dogg. Six bands of equalization, coupled with detented controls make the Maag EQ quite versatile, offering its articulate presence to a variety of sources. Fitting in a simple 1U 500 Series slot, the EQ4 leaves a big sonic footprint, all from a small package.

The Rupert Neve Designs 542 is beloved in studios worldwide for one reason– its ability to dial in harmonic texture with ease. The “True Tape” circuit enables users to drive 3rd order harmonics via tape saturation, and the soft clipping circuit smooths over transients in that gentle, tape compression characteristic way. The 542 allows for selection of either 15 or 30 IPS modes, which modifies the characteristics of the tape sound. Also included is the renowned RND Silk control, which lets you dial in transformer saturation focused either in the high mids, or in low end thickness based simply on selecting Red or Blue mode. If the sound of tape is what you’re after, the RND 542 is an easy way to absolutely light up your mixes.

Using the channel strip of the SSL SiX desktop mixer as its inspiration, Solid State Logic brings us the SiX CH 500, a lunchbox format channel strip with classic SSL features. Deriving the EQ design from the iconic E Series EQ, the SiX gives you smooth high and low bands that can switch between shelves and bells at crucial frequencies like 3.5 kHz and 60 Hz. The SiX channel offers the Superanalogue preamp circuit found in various modern SSL units, and the one knob compression applies a gentle 2:1 ratio to signals with a program dependent attack. Considering the sound and heritage of its makeup, the SiX Channel Strip delivers a ton of features at a great price.

One of the most ubiquitous 500 Series modules on the market, the API 512c has been a classic choice to harness the punchy API sound for years. Using the same 2520 Op-amp and discrete design at API consoles, the 512c delivers the same sound with fast transient response and high end openness. A favorite on everything from drums to vocals, the 512c will notably liven up the sound of almost any mic it’s paired with. A simple one knob gain control and LED metering make the 512 a quick-results kind of piece. Simply put it in your favorite 500 Series lunchbox and get to work harnessing the “American Sound” of the 70s.

The Cranborne Camden 500 is a newer kid on the block, but brings us an impressively clean tone in a small, budget-friendly package. Under essentially any setting, the Camden exhibits stunningly low distortion and impressively flat frequency response, meaning you can crank this preamp without hearing audible side effects. While circuit topology starts off crystal-clear sounding, the Mojo controls enable you to add in flavor and coloration as needed. You can also dial in Cream mode for smooth low mids, or use Thump mode to add in harmonic excitement in the low end. At a fraction of the price of most other 500 Series favorites, the Camden is sure to upset the pecking order of your studio’s preamps.

One of our favorite modern vocal compressors, the CL 1B essentially brings you the flavor of classic opto compressors while adding in comprehensive, thoughtful controls. Attack, Release, and Ratio controls (not traditionally found on classic opto’s like the LA-2A) allow engineers to shape the sound of compression taking place, making this piece incredibly versatile. Hip hop engineers often find the CL 1B to be a favorite on vocals due to its smooth, transparent warmth. Transformer balanced input and output stage impart richness throughout the Tube Tech, and the Bus selector control makes for easy chaining of up to 10 compressors. Found in iconic control rooms worldwide, the CL 1B is an obvious choice for radio-ready vocals and more.

Spawned from Chandler Limited’s collaboration with EMI, the TG-2 preamp is a 500 Series recreation of the TG 12428 preamp found in classic Abbey Road EMI consoles. Delivering an identical frequency response to the EMI circuit, users will find the TG2 to offer the warmth and richness similar to a Neve, but with an open, airier top end. A favorite of top engineers like Ryan Hewitt and Michael Wagener, the TG2 recreates in a 500 Series form the same sound found on legendary records from The Beatles and Pink Floyd. Users wanting classic tonality in a small package will find plenty to love with the Chandler TG2-500, making it no surprise that Abbey Road Studios themselves employ the Chandler reissues of the classic EMI desk modules.

One of the most popular modern units in the pro audio world, the Empirical Labs Distressor is an incredibly flexible compressor that sounds musical on virtually any source. With digital controls, the Distressor can switch through different analog circuits based on the desired flavor of compression. The distortion modes conveniently allow users to dial in 2nd or 3rd order harmonics to emulate the sound of tube or tape distortion. The updated EL8X brings thoughtful new features like the “British Mode” (an emulation of the 1176’s All Buttons In mode), and Stereo Image Link option allows you to easily decide how a pair of Distressors interacts with two channel signals. Found on virtually all modern hit records, the Distressor is a classic that simply keeps getting better.

A returning icon, the Pultec EQP-1A is back in modern production. The Pultec tube EQ design can be found in some variation in almost all major studios of today, as its loved for its rich, smooth qualities that boost sounds in a natural manner. Dr. Steven Jackson brings us a painstaking modern reproduction, having consulted extensively with original Pultec designer Eugene Shenk to ensure that the EQP-1A meets the exacting specs of the original. Add warmth and depth to signals just by passing them through the EQP-1A, or use the infamous shelving curves to tighten up low end. It’s hard to go wrong with the gentle, forgiving way that the Pultec interacts with sounds. If you have any questions or would like to purchase any of the outboard gear mentioned in this blog, we're here to help! Please contact a Vintage King Audio Consultant via email or by phone at 866.644.0160.
Products in this Article
Categories: News and Events
Tags: featured, Dynamics, EQ, Outboard Gear, Compressor, Equalizer, Best Selling Outboard Gear, Microphone Preamp, Best Sellers 2021 & Best Sellers Outboard Gear
Posted By: Nathan Doyle