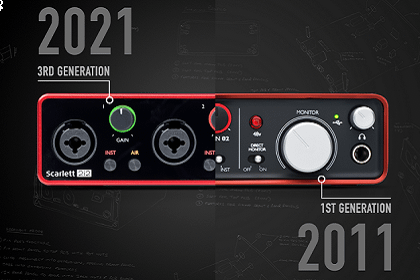 It's been 10 years since Focusrite introduced the recording community to the Scarlett series. In that time, over four million music makers have utilized the interfaces to create countless records all over the globe. And it all started with the Scarlett 2i2...

Launched in 2011, the Scarlett 2i2 interface allowed musicians access to record with two award-winning Focusrite preamps wherever they wanted. The Scarlett series expanded between 2012 and 2014 with new additions to the lineup and in 2016 the interfaces got a refresh with improved audio quality.

Focusrite wasn't done perfecting the Scarlett series though. In 2019, the brand made a number of upgrades to the interfaces, including further refining its audio quality, adding USB-C connectivity and bringing aboard Air mode. The all-analog Air circuit allows users to emphasise transient response, brighten sources and bring additional clarity to their recordings.

Watch the videos below to see how Focusrite is celebrating 10 years of the Scarlett series, including the recording of a track from The Amazons using the interfaces. Continue on afterward for a breakdown of each member of the Scarlett family.

The Focusrite Scarlett Solo ($119.99) is the simplest interface of the Scarlett series, but features everything you need to start recording. We're talking one Scarlett mic preamp with Air mode, a high headroom instrument input and high performance converters for recording, mixing and playing back audio.

The interface that started it all! The Scarlett 2i2 ($169.99) is the same 2-in / 2-out interface that kicked off the Scarlett series, but with several upgrades that keep it on top in 2021. The 2i2 features two Scarlett mic pres with Air mode, two high headroom instrument inputs and the latest generation of converters from Focusrite.

The next step up from the 2i2 is the Scarlett 4i4 ($239.99), which features more inputs, outputs and connectivity. There are four balanced line inputs, four line outputs, two Scarlett preamps with Air mode, two high headroom instrument inputs and loopback for grabbing stereo feed of any combo of hardware inputs and software playback.

The Focusrite Scarlett 8i6 ($299.99) delivers all of the bells and whistles of the 4i4, but with even more inputs. For this interface, users will get to take advantage of six balanced line inputs and four balanced outputs, two Scarlett mic preamps with Air mode, two high headroom instrument inputs and loopback.

The Focusrite Scarlett 18i8 ($419.99) is the largest desktop interface in the Scarlett lineup. Despite its compact size, the Scarlett 18i8 packs a large punch of I/O with enough inputs to track a full band. We've got four Scarlett mic preamps with Air mode, two high headroom instrument inputs, eight balanced line inputs, four balanced outputs and four monitor outs.

If you love any of the previously mentioned Scarlett interfaces, but want to up your channel count, the OctoPre ($439.99) is just what you're looking for. This rackmount mic preamp option can expand your interface with eight additional Scarlett preamps. Want onboard compression added into the mix? The OctoPre Dynamic ($659.99) allows you to dial in analog compression on each individual channel with a single knob control.

If you're interested in purchasing a Focusrite Scarlett interface or have questions about any Focusrite product, we're here to help! Please contact a Vintage King Audio Consultant via email or by phone at 866.644.0160.
Products in this Article
Categories: News and Events
Tags: featured, Recording Interface, Focusrite, Scarlett, Focusrite Scarlett & Audio Inteface
Posted By: Eric Allen