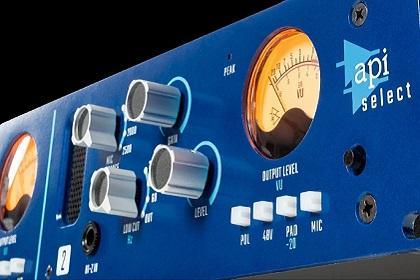 API has announced the introduction of the API Select range, a new product lineup that breaks from the brand's classic mold. These fresh offerings incorporate unique technology that API has purchased through the decades with its own homegrown designs.

API Select gear has been designed, built and tested at API's HQ in Maryland, so you’re getting the same high-quality products as the rest of the brand's offerings. In total, there are six new pieces of gear, including the T12 Tube Mic Preamplifier, T25 2-Channel Tube Compressor, SR22 Dual-Channel Compressor, SR24 Dual Channel Equalizer, TranZformer GTR Pedal and TranZformer CMP Pedal. So what's going on with each release? Let’s dive deeper.

The first member of the API Select family is the T12 Tube Mic Preamplifier ($2085.25),  a dual mic preamp with a tube-based circuit. For this pre, we get two channels utilizing 12AT7WC and 12BH7 tubes, in addition to proprietary API input transformers and custom transformers on the output stage. API promises engineers that the T12 brings the punch and warmth they are known for, but that it does so in a completely new way.

Another tube-based addition to the fleet, API Select offers up the T25 2-Channel Tube Compressor ($2085.25). The T25 is a FET feedback-style comp/limiter with a Class-A tube output stage that packs a custom API transformer and the same dual-triode vacuum tubes as the T12. API touts a "powerful and flexible feature set" with the T25, as users will be able to take advantage of all that tube goodness in both dual mono and stereo mode. The compressor comes standard with 11 attack and release settings, four fixed ratios and API's patented THRUST switch for frequency-dependent side chain control.

API has included a second compressor in its API Select range, the SR22 Dual-Channel Compressor ($1230.25). This compressor finds its origins in the legendary ATI Paragon console. Many will be familiar with the ATI (Audio Toys, Inc.) name, as the brand was a popular choice for live sound consoles in the 1980s and 90s. API has taken the exact compressor from the Paragon P40 and dropped two channels of it into the SR22.

Like the classic ATI compressor, the SR22’s attack and release are totally program-dependent, which makes operation extremely simple. The unit also features API's THRUST mode, retro-style VU meters for output level, a Soft Knee button and classic API style knobs, making it both classy and functional. The compressors are linkable for stereo operation.

API has created a new EQ for the API Select family dubbed the SR24 Dual Channel Equalizer ($1230.25). This unique piece of EQ history is derived from APSI, a small company sold through API from the late 1970s to the early 80s. APSI was a console and EQ manufacturer and the brand's 562 module has become a favorite of engineers since its release. API decided to bring back the 562 EQ design for this new dual-channel equalizer.

The API Select SR24 features two channels with four bands each that offer the ability to boost and cut 12 dB per band. The EQ covers the range from 20Hz to 20kHz in overlapping frequencies from 20Hz to 200Hz, 100Hz to 1000Hz, 500Hz to 5000Hz and 2000Hz to 20kHz. Using continuously variable controls, the SR 24 can be zeroed in to augment or remove frequencies with great precision.

API’s recent venture into the world of guitar pedals is being revived with two new releases in the API Select lineup. Let's start with the TranZformer GTR ($280.25), a pedal that combines EQ functionality with Boost and Drive controls. Sculpt your guitar's sound with a three-band tone control that offers an API-style EQ, complete with a signature API output transformer.

The OpAmp overdrive circuit allows users to dial in the right amount of drive, meaning this pedal imparts the iconic “API sound” with ease. A gain stage switch allows you to choose between Clean Boost and Overdrive mode to push the OpAmp even further.  The pedal also features 1/4 Hi-Z inputs and outputs, a -20 dB output pad, a selectable peak/shelf for upper frequency range and buffered bypass.

The second pedal design, the API Select TranZformer CMP ($280.25) offers API’s signature breed of VCA compression in a stompbox format. The CMP utilizes the same key elements of the API 527 EQ, including the proprietary API 2510 OpAmp and API output transformer. Guitar players can take advantage of both "feedback" and "feedforward" compressor styles via the Type switch and control attack and release times via dedicated switches. There are also knobs for Output, Blend, Sustain and Input. In a fairly small footprint, API lends studio-quality compression to your guitar chain with this member of the range.