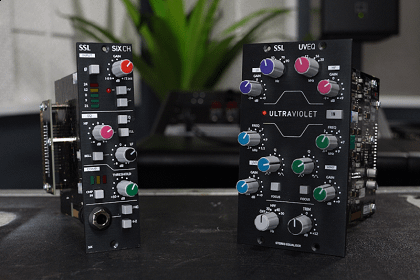 Solid State Logic has had plenty of new releases in the past few years, most notably the Fusion and SiX. These two best-selling products have garnered lots of customer feedback and SSL has heard you loud and clear. The storied pro audio brand has taken some of the essential elements of the analog processing box and desktop mixer to create two new 500 Series modules. We're excited to introduce you to the SiX CH Channel Strip ($399) and UltraViolet EQ ($1299).


As its name implies, the SiX CH Channel Strip takes inspiration from the SiX and brings one of the desktop mixer's channel strips straight to your 500 Series rack. The module includes the SiX's microphone preamp, two-band low and high EQ and a single-knob compressor. The SiX CH offers a clean, ultra-low noise SuperAnalogue mic pre with your standard phase, phantom, high pass filter switches and Mic/Line options. The EQ offers an In/Out button, a knob for HF and LF and a button for each band that allows you to choose between shelving and bell curves.

For the UltraViolet EQ, SSL pulled the stereo EQ section out of the popular Fusion rackmount unit. While the original Fusion Violet EQ section utilized a two-band design with four selectable frequencies, the UltraViolet EQ offers even more control over the EQing process. We're talking about a four-band stereo EQ with two additional mid bands that weren't included in the original design. Let's not forget about the new "Focus" mode, which when deployed narrows the chosen Q setting further and increases the range of gain available.

Enough talk about the SiX CH Channel Strip and UltraViolet EQ... Let's hear them in action! We headed into the Vintage King video studio with Olivia Dear and Bryan Reilly to track through a pair of SiX CH modules and do some more detailed carving with the UltraViolet EQ during the mixing process. Check it out below! 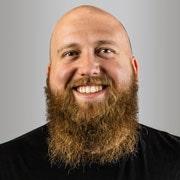