Behind The Gear: GOLY 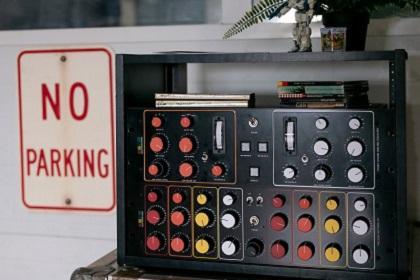 Based in Denmark, GOLY’s Gustav Grinderslev has contributed some of the most eye-catching pieces to hit the mastering market in quite a while. Both the GOLY Stereo Dynamic Shelving EQ ($4443.06) and PG Porter Grinder Mastering EQ ($4236.69) offer a unique take on equalizer design that will have mastering engineers salivating.

We recently sat down with Gustav and talked about design philosophy, the inspiration behind his current pieces, and more. Before we get to the interview, you're going to want to check out our new demo of both GOLY units below.

What first inspired you to start making your own gear pieces?
I started working in a family-owned electronics manufacturing company at a very young age, but never really got interested in electronics. When I started playing music in my early teens, the lure of making a piezo for my upright bass, pedals and small pieces of outboard just grabbed me. I was heavily into recording, but I had more fun calibrating a tape machine or learning how the automation on the desk worked than dealing with recording artists.

Diving in further, I found some great resources at GroupDIY (originally a geek-forum at recording.org). I would never have dove this deep down the rabbit hole without the dark, secret knowledge shared kindly and openly there. I was lucky to come up in what now seems like the golden age of the forum format.

How did you first get into designing mixing and mastering equipment?
It was never meant to be "a living." My formal education consists of a degree in music from my local conservatory, which I followed with a Master's and a research degree in political science. I wanted to work in politics, wanted to “get shit done,” but I couldn’t stomach working as a political consultant. Most people enter with some sort of ideology, but the reality is, that you mostly work on things that are very intangible, slow churning and relations-driven. Building something and seeing if it works or blows up is more up my alley.

The first designs I did were open DIY projects, mostly based on all the familiar clones offered by a wide range of companies today. This evolved into kits, which evolved into projects too complicated and elaborate for DIY. A unit is not really suitable for DIY if you have to build a dozen of them before having the feel for the details to make it great. So that’s when I started GOLY in January 2019.

Let’s talk about your Dynamic Shelving EQ. How would you describe it to someone not familiar?
It’s a dynamic processing device that you have to take a little time to learn how to play, sort of like an instrument. The EQ curves in and by themselves resemble the familiar Baxandall EQ curves, but it’s not a Bax, since that denotes a certain design topology, which it differs from.
The shelving EQs have dynamic controls and there is a highly elaborate high and low cut filter design incorporated into it (it’s half the circuit, but just four knobs).

Some users call it a Bax on steroids. Some users call it a high and low end management system. I would lean towards calling it a “negative space dynamic loudness device,” but that has a lot to do with my own vision and approach for it. What it turns into in the wild can (and probably will) be something I never thought of myself, and I love getting feedback from users that takes me to new places with it.

What’s the design process like behind your pieces? What kind of development process do you go through?
I work in an idea/feedback loop. I like to expand on functionality and try to be creative but then pull back on it to find something essential that contains the substance of what I am trying to do.

I usually joke that “a five-string bass is not a bass.” I put the same kind of mentality into my design work, and I am highly dependent on feedback from experienced mastering engineers and listening tests in the development phase. I will sometimes have discussions with them about my design philosophy, trimming away “the fat,” but I trust their ears 100%. I am just not a mastering engineer.

The sound and functionality are always the foundation. When the function “X” goes up, as I turn knob “Y,” and it has been through listening tests and design tweaks, it’s 90% done in my mind.

I tinker with the precision work in my own bubble. Feedback is also needed at this stage because the design is so empirically driven by the listening tests, but this is more quantitative than qualitative, and it’s more about weeding out anomalies. This also takes a very certain mindset to get just right. I think some call it “OCD,” and I don’t have that, so I also rely on feedback from people who do that.

Were there any existing pieces of gear that inspired your work on either the PG Mastering EQ or Dynamic Shelving EQ?
The “P” in “PG” is a nod to the original Barry Porter design.  I have the details written out in the user guide for the unit, which you can find on the GOLY website.

The Dynamic Shelving EQ was a deep dive into “no crossovers, dynamic loudness equalization.” More abstractly, it was inspired by working with a local electrical engineer under the moniker “Munson and Fletcher,” and by input from my good friend, Jakob Erland at Gyraf Audio.

I started building iterations of the circuit back in 2016, but none of the units that manifested really sat well with me. I got frustrated and drove a pile of prototypes to the local recycling station in 2018, and reminded myself of the sunk cost fallacy! But then, when the COVID lockdown period hit, I had a light bulb moment, and that timing was just perfect to dive into it and work on it for the remainder of the year.

What’s next for GOLY? Anything new in the works that you can talk about?
Even though I don’t have any time at all right now (with a book full of orders for 2021), I am somehow finding time to work on a beta for a new unit, which I guarantee will pair perfectly with the Dynamic Shelving EQ, if it doesn’t end up at the local recycling station!