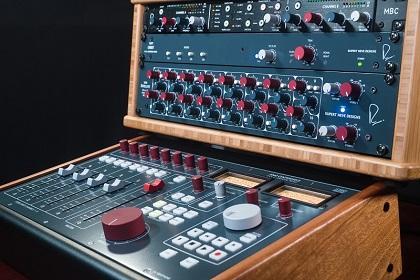 Just a week or so after the news that the 5059 Satellite and 5060 Centerpiece would be getting the Shelford Blue treatment, Rupert Neve Designs has announced its summing family will be expanding further. The new 5057 Orbit ($1999) condenses Rupert Neve's classic console sound into a 1U rackmount unit with 16x2 class-A analog summing.

With the release of the 5057 Orbit, Rupert Neve Designs is offering something summing-related for recording studios of all shapes and sizes. At the top, there is the award-winning 5088 recording console. This is the culmination of six decades of console design from Rupert Neve and its technology flows throughout the rest of the brand's product line. Before we get into the details of the 5057 Orbit, here's a quick breakdown of each summing option:

Perfectly sized for desktop use, the Rupert Neve Designs 5060 Centerpiece is a hybrid mix system that delivers the best of both analog and digital worlds. Not only do you get tactile control over your stem outputs from your DAW, but you can get the classic Rupert Neve sound. We're talking custom transformers and a Rupert Neve-designed 24x2 mix buss.

Standing at 2U tall, the 5059 Satellite is another out of the box option from Rupert Neve Designs that delivers a 16x2+2 summing mixer. That's 16 channels that each feature level, pan, inserts, stereo-2 sends and master texture control. This beast also features custom transformers and a Class-A topology to achieve the warm sonic texture that all Rupert Neve-designed gear is known for.

Alright, so let's get to what you're here for. The new 5057 Orbit is a 16x2 summing mixer that packs in a ton of analog goodness into just a 1U rack space unit. Whether you work in the box and have relatively no analog gear or you are building out a larger system with more RND gear, the Orbit is an incredible option.

All the trademarks of Rupert Neve Designs are here. The Orbit offers Class-A analog summing with Rupert's custom transformers and both the Silk Red and Blue circuity for your choice of saturation. Following suit with the Shelford Channel's custom output transformer set-up, the Orbit offers both a Main Output and an additional -6dB output. This enables engineers to push on their unit without clipping.

Orbit's summing capabilities will enable you to add the power and warmth of analog to your in-the-box mixes. The summing mixer delivers on everything you want it to with tone, depth and clarity, thanks to fixed channel levels and stepped switching. The front panel's four mono switches also enable you to center any mono mix elements.

The rear panel of the Orbit features two DB25 inputs and XLR outs for the Main Out and -6dB outputs. As we alluded to earlier, Rupert Neve Designs has wisely designed its gear so studio owners can chain pieces together and build out bigger summing rigs. The Orbit has a Buss Link connection so that it can be expanded with other Orbit units, the 5059 Satellite and 5060 Centerpiece.

If you would like to purchase the Rupert Neve Designs 5057 Orbit, 5059 Satellite or 5060 Centerpiece, we're here to help! Please contact a Vintage King Audio Consultant via email or by phone at 866.644.0160.
Products in this Article
Categories: Product News
Tags: featured, Rupert Neve Designs, Summing Mixer, Summing, 5060 Centerpiece, 5059 Satellite & 5057 Orbit
Posted By: Eric Allen