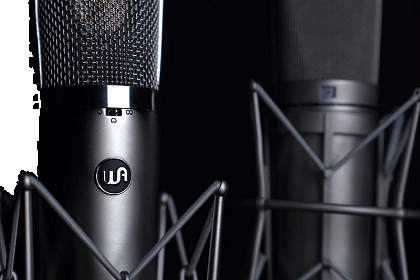 At the tail-end of what would traditionally be AES season, Warm Audio is putting an exclamation point on the current crop of new releases with the WA-67. That's right, the pro audio brand that has given us wallet-friendly versions of the 47, 87, and 251 is now back with its own take on the classic workhorse microphone.

For the uninitiated, the U67 came about when Telefunken would no longer produce the VF14 steel tube used for the U47. Neumann began working on the microphone's successor and introduced the U60 in 1960. This mic would eventually become known as the U67. Since its launch, the microphone has achieved Mt. Rushmore-level status, a must-have for any session.

Since vintage U67s can cost a pretty penny (up to $10,000), many modern brands have brought their own reproductions to the market. The Warm Audio WA-67 is a new addition that comes at a great price ($899) with high-quality components. The microphone's build features a recreation of the classic U67 pentode tube circuit, EF86 pentode tube, custom Lundahl large-core transformer, and custom K67-style capsule.

To put the new Warm Audio WA-67 to the test, we did a side-by-side shootout of the microphone with a vintage U67. Watch below to hear both microphones used on vocals from Ali Shea and Jake LeMond, electric guitar played by Dustin McLaughlin, and acoustic guitar and drums performed by Bryan Reilly. If you have questions about the Warm Audio WA-67 or would like to purchase one for your studio, we're here to help! Please contact a Vintage King Audio Consultant via email or by phone at 866.644.0160.
Products in this Article
Categories: Shootouts, News and Events, Videos & Product News
Tags: featured, Shootout, Demo, Video, Microphone, Warm Audio, U67, Neumann U67, Tube Microphone & WA-67
Posted By: Eric Allen