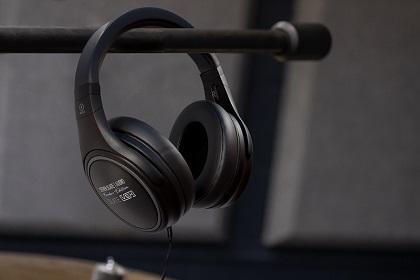 Steven Slate has been at the forefront of innovation in the pro audio world for over a decade now. His recent releases find cutting-edge software working in tandem with physical products to emulate classic studio technology, and thus giving engineers a number of tools at a great price.

Under the banner of Steven Slate Audio, Steven is pushing modeling to a new realm with the release of the VSX Headphones. This hybrid system combines headphones featuring lightweight beryllium hybrid drivers and custom analog tuning circuitry with a modeling plug-in that recreates a variety of listening environments. NRG Recording Studio, Archon Recording, car stereo, nightclub sound system, classic reference boombox... There are all there, and there's more.

We recently caught up with Steven to chat about the VSX Headphones, the modeling technology they utilize, and his development process. Continue below to check out the conversation and to gain more insight into this exciting new release.

Let’s talk a little bit about the new name of  Steven Slate Audio.
Steven Slate Audio was born out of handing out drum samples to producers and mixers when I first got to Los Angeles. I realized that there was probably a business that I could’ve made out of that; rather than having five or six guys use my samples, I could maybe have 5 or 6 thousand or more. Steven Slate Drums and Slate Pro Audio were my first audio brands, now they are under the Steven Slate Audio brand.

What demographic did you have in mind when creating the VSX Headphones?
It really does something for every demographic– you’ve got major, big time pros who now can mix from anywhere on their favorite kind of speakers and quickly see what a track will sound like on Apple earbuds or a boom box. These are things that these mixers are always going to do anyway. Pros want to hear their mixes on different references. Jay at NRG found the capture of his spot so convincing that he’s now able to mix records while sitting by his pool [Laughs]. One of the really great parts of VSX is that it locks you into mix position; you have no phase shift. That can be really advantageous in the fine-tuning stages of a mix.

Of course, it really shines for the home studio guys, because they tend to put a studio in places that are not really intended for it, like their bedroom or garage. Maybe they don’t have the money for a really high-end speaker system, bass absorption, tuning systems, all that. They spend a lot of time trying to fight room modes and phase cancellation. So when people mix on this thing, they’ll be able to have really consistent mixes. Anything that can get you better mixes is a valuable tool, and proper, confident monitoring is an incredible tool for getting better results.

Was the process of designing the VSX similar to that of the VMS?
Well, this was way, way harder. This was one of the hardest things we’ve worked on. It’s just so tough to tune everything properly, to make it sound right, to get consistency. We’ve done over 7000 binaural capture and HRTF processing formulas to get this thing just right. The thing with a system like this is that it has to be exactly right.

How did you choose which studio spaces to model?
Well, I’ve been in NRG Studios so much, I love that studio. The other one, Archon, they’re just obsessive about having a great sounding space. These are some of the best sounding rooms, some of the best critical listening environments in the world. So those are just two great mixing rooms. Howie Weinberg’s mastering room sounds great. So they’re just some really cool sounding spots with very flat frequency response.

Do you have a personal favorite setting on the VSX?
Believe it or not, I honestly love the models of the NS-10s with the sub that came out at NRG. It’s fun to mix on. Everything I’ve mixed on those just translates. Keep in mind, those NS-10’s we modeled had brand new cones on them. The tweeters and drivers in those do not last that long. If they’re not fresh cones within the last year or so, you’re probably not hearing an NS-10 in all its glory. I was shocked by how they came out.

How does the development at Steven Slate Audio go? Can you tell us a little about the design and development process new pieces go through?
The concept happens first. We have an idea that’s going to solve some problems, and we work on that as a team. Nothing is done just by one person, we work on ideas as a team. So everyone brings their expertise, and we keep refining the product. Then we move into the next stage and build a prototype. Then again, we refine and refine until we hit what’s called the "golden prototype." Once we get that, then we start beta testing and get it to a larger pool of people. Then we continue to refine the prototypes through the beta tests, and once that’s done it’s released.

What’s in store for the future of your two companies?
Of course, VSX is the big one right now. I think it’s going to really help people make better sounding music. That’s what I’m focused on right now. Then we have some great software coming out soon with Slate Digital. It’s all with the same focus, which is trying to make things so that people can make better music, and have more fun doing it.