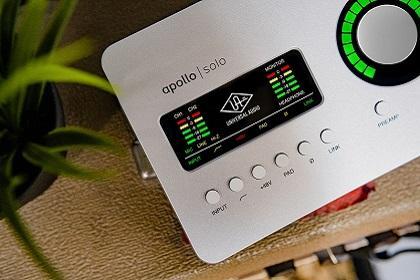 Just over a month ago, Universal Audio announced the release of the Apollo Solo and Apollo Solo USB. Both versions of the interface pack high-quality conversion, Unison-enabled mic pres, and UAD-2 processing power into a road-ready chassis that stands as the most affordable Apollo yet.Typically when we are done shooting video and photos of a new product, we send it back to the manufacturer. This time we thought to ourselves, "Why don't we give this Apollo Solo to one lucky fan?" And guess what... We're doing just that!

For this giveaway, we're keeping things real simple and having you do all the work on YouTube. Start by watching below! Do as Dustin McLaughlin says and click the thumb's up button on the contest video, leave a comment describing why you deserve the Apollo Solo, and subscribe to our YouTube channel. We'll select one winner at random and they'll receive the Thunderbolt version of the interface featured in the video.

Please read the official rules for our contest here. We'll be choosing our winner at 11:59 PM EST Wednesday, September 30th, 2020, so be sure to subscribe, like, and comment by then in order be entered to win.