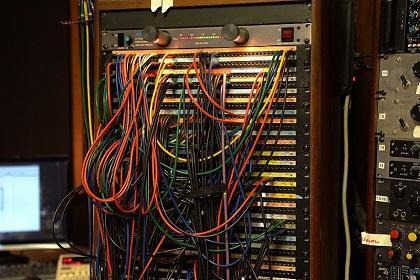 Patch bays are an integral part of the workflow of many professional studios. They’re the nervous system of the control room — the central point from which every piece of gear is connected. However, with so many different types to choose from, it can be difficult to know which patch bay is right for you (or if you even need one at all).

In our latest Buyer’s Guide, we’ll explain everything you need to know about patch bays, including the different connections types, normalling configurations, and common grounding methods. But before we get into it, let’s take a quick look at the history of patch bays.

The History of Patch Bays

It may be hard to believe, but the very first patch bays were designed in the 1800s. In 1876, Alexander Graham Bell made history when he made the world’s first telephone call. Two years later, the first manual telephone exchange center opened, equipped with a custom patch bay for routing calls.


While audio technology has improved exponentially since then, your average patch bay operates in much the same way. While the early telephone jacks, sometimes referred to as “longframe jacks” are typically only found in legacy studios, the newer “tiny telephone jacks” are still used commonly today for their compact design.

In the 1960s and 70s, as analog recording equipment became more popular, more and more studios began adopting patch bays to speed up their workflow and make it easier to connect different devices. Since then, several different types of patch bays have been designed, including new digital models that let you patch devices directly from your DAW.

Patch bays come in all different shapes and sizes from brands like Redco Audio, Switchcraft, and Bitree. Some models offer as few as 16 inputs and 16 outputs, while most offer 48 insert points per rack space, for a total of 96 patch points. Aside from the number of inputs and outputs, the main difference in patch bays is connection type.

Each patch bay offers two types of connections; one set on the front, and another on the rear. The most common front-panel jacks still use TT connections, also known as tiny telephone or bantam cables. These compact cables are a bit smaller than your standard 1/4” cable, but still provide a balanced signal.

Other front-panel connection options include balanced ¼” connectors and XLR, but generally, TT connections offer the highest quality and provide the most reliability over time. Common ¼” cables tend to degrade over time, causing connectivity problems.

Most patch bays feature DB25 connectors on the back, which allow you to connect up to eight channels to various devices via a breakout cable, also known as a snake, whip, or loom. The other end of the snake typically features a combination of XLR and TRS jacks for connecting to different devices.

Other types of back-panel connections include EDAC 3 and EDAC 90, which offer significantly more flexibility when working with banks. These models offer banks of up to 24 channels, which can be customized and configured as needed. Some older patch bays feature Cannon DL connectors or bare-wire solder points for hardwiring analog connections.

Last but not least, hybrid digital/analog patch bays like the Flock Audio Patch System typically feature DB25 connectors on the rear, with few or no front-panel connections. Instead, the device connects directly to your computer via USB, and all of the routing is done within your DAW. Some models also feature Dante or AES ports for additional connectivity.

Patch bays are designed to streamline your workflow and save you time when connecting gear in the studio. To achieve this, the patch bay is configured so that the most common connections are already made, but can be easily switched as needed. This process is called “normalling."  There are three different types of “normalled” connections:

Fully Normalled: Typically used for preamp connections, this configuration automatically routs signals from the top row (outputs) to the corresponding output on the row below (inputs). The connection is broken when a cable is inserted into either row.

Half-Normalled: This is the most common type of configuration, in which a signal is automatically routed from the top row to the bottom row—just like a fully-normalled connection. However, the signal is only broken when a cable is inserted into the input (bottom) jack. This allows you to “mult” a signal and send a duplicate copy to another device, as well as the original destination.

Non-Normalled: In some cases, you may want to protect certain devices from accidentally receiving an unintended signal. In this case, a non-normalled connection is recommended. In this configuration, a patch bay will only pass signal from one channel to another when a cable is connected.

Every studio has unique grounding requirements. Most patch bays also offer options for bus grounding, which is the simplest configuration. Additionally, the grounding for each channel bank can be isolated to help reduce noise. The best patch bays include a grounding lug on the back, which allows you to utilize a star grounding technique for the cleanest sound.

Do You Need a Patch Bay?

It’s tough to say if your studio needs a patch bay without knowing your workflow, but if you find yourself wishing you spent less time connecting different devices, you would probably benefit from one. They are an extremely efficient and inexpensive way to utilize your gear.

And if the act of mapping out every piece of gear in your studio seems daunting, it doesn't have to be. Vintage King can help with our custom patch bay creation service. For years, we've helped engineers and studio owners figure out the best way to put together their gear, assemble the right amount of cabling and connection types, and build them custom patch bay rigs.

It starts with a consultation with one of our trained studio technicians to determine the best way to optimize your workflow. We’ll document every piece of equipment in your studio, analyze the layout of your room, and map out the connections for each device to ensure everything syncs up seamlessly. We’ll take care of everything, from configuring normalling and grounding settings to soldering custom cables and connections. If you have questions about patch bays or would us to desigh one for your studio, we're here to help! Please contact a Vintage King Audio Consultant via email or by phone at 866.644.0160.
Products in this Article
Categories: Buyer's Guides
Tags: featured, Buyer's Guide, Studio Workflow, Patch Bay, Patchbay & Patch Bays
Posted By: Brad Pack